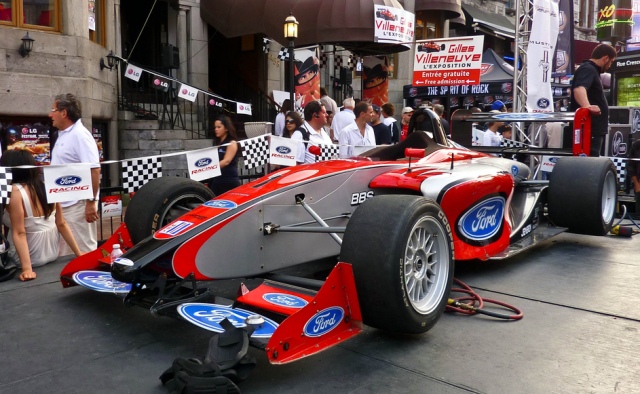 There are a lot of reasons to hate the Grand Prix. Noise, street closures, its celebration of car culture, its objectification of women, the absurd levels of excess and material consumption associated with it — whatever makes the vein in your forehead throb, odds are you’ll find some aspect of it at the Grand Prix. Possibly most egregious is the extent to which the event is subsidized with public funds, especially in recent years.

Today, Formula One representatives and public officials are set to announce an agreement that would keep the Grand Prix in Montreal for 10 more years. This, according to La Presse, will cost us only $25-million to $40-million in improvements to the Circuit Gilles-Villeneuve, plus an annual “contribution” to F1 chief Bernie Ecclestone’s company, FOM, that starts at $15-million, indexed by 4 per cent per year. Granted, these costs are being split between Tourisme Montreal and all three levels of government, but that’s still tax dollars, 75 per cent of which now comes from individuals rather than banks and for-profit corporations.

It’s pretty insulting timing to make this kind of announcement the same week that Quebec tables an austerity-driven budget. Premier Philippe Couillard was quoted in The Gazette yesterday (Thursday) explaining that the province is like a family that maxed out its credit cards and now has to make choices that include, “Well, maybe we’ll go to restaurants less for a few years, or not go far on holidays or not trade cars for now.” The Grand Prix is nothing if not an opportunity for less-strapped families to rack up credit card debt going on holidays, eating in restaurants and aspiring to fancier cars. Why is our collective family being asked to support this to such a large extent, and three times over if you’re a municipal-tax-paying Montrealer?

“Jobs,” the answer comes back, every time. “The economy.”

Personally, I wanted to try and understand what this thing is that we’re paying for in the name of somehow improving our lives, so I took a walk down Crescent Street on Thursday.

Far from being a paradise of rich tourists dropping megabucks and creating stable, long-term and well-paid jobs, this was all minimum-wage gigs, slinging sponsors’ merch at people who were clearly not starving, but at the same time, obviously not billionaires either. One of these visitors is Terry Robichaud, of Woodstock, Ontario, who says Grand Prix is great for the city: “We paid $1,000 for a shitty hotel room the size of this van, and we’re reasonably pleased with it.”

Why is someone reasonably pleased to pay that much for a long weekend in a hotel they’d describe as “shitty”? For the love of the race. While Robichaud doesn’t travel to Montreal every year, he says he hasn’t missed a race in 20 years. “They spend millions to make these cars run even one-tenth of a second faster… Can you imagine driving among those speeding cars, with only this much space between you and the wall?”

I’m a cyclist in Montreal. This is my daily reality, I tell him.

Robichaud laughs. “There you go. This is the only truly worldwide event… There’s a real sense of camaraderie — the guy in California is awake at 4 a.m., drunk, watching live. You can talk F1 to someone even when you don’t speak the language.”

Which sounds great, but as a society facing deep cuts to public spending, do we need to subsidize that sense of camaraderie?

If Ecclestone really can’t find the money to run his event every year from somewhere in his $4.2-billion net worth, then why not let him ask his sponsors to dig a little deeper to cover track improvements?

After all, they’re directly profiting from the event, not just from marketing but also by selling their merchandise at the street fairs. Need a CHOM sweatshirt or an Alouettes Cheerleaders calendar? Crescent has you covered. In fact, if you’ve been waiting to buy that calendar directly from an Als cheerleader, they were there Thursday, walking around in booty shorts and crop tops, in the cold and the rain.

Obviously, I did not have to wait long to overhear one cheerleader being asked for her phone number and another being asked what month she was. While that was pretty predictable, as were the equally underdressed women in nearly every booth, the ingrained sexism went beyond the obvious objectification. For example, a racing simulation booth whose (unilingual) slogan is “Drive like you’ve got a pair” (of balls).

And the fun doesn’t stop there. At the pit stop competition booth, the prize is posing for a photo with three female models. No male models were around, if that would’ve been more interesting to any participants. I did see one woman compete, and the host’s clumsy patter clearly indicated that this was a first. Directly across from the pit stop competition is the Virgin Radio booth, offering free makeovers and manicures, presumably to keep ladies busy while their male partners take the same tires off the same car over and over again. After all, according to Robichaud, the draw of Montreal’s Grand Prix isn’t just that the cars are “the epitome of technology,” but also “the girls are prettier than at NASCAR — there you get these big American types.”

So if women can’t drive, and we’re not supposed to change tires, and we haven’t yet found employment as booth babes or grid girls (or at NASCAR), what can we do, once we’ve had our make-up done?

We can play soccer. Especially if we’re under 20. The FIFA U-20 Women’s World Cup booth is brilliant and popular. Every time I passed by, there were women in push-up competitions, and crowds of men around the foosball table. On top of it, the staff at this booth were the only ones who were dressed for the weather, and who seemed to be having any fun at all.

It’s great to hope that some of the local F1 crowd will support that event as well, but one bright spot in a sea of muck doesn’t really justify subsidizing a billionaire’s event while also freezing public spending on social programs. ■

There have been 132,461 known infections of COVID-19 in the city. Here’s how that number breaks down by borough.

It’s all mRNA, don’t be a vaccine queen.