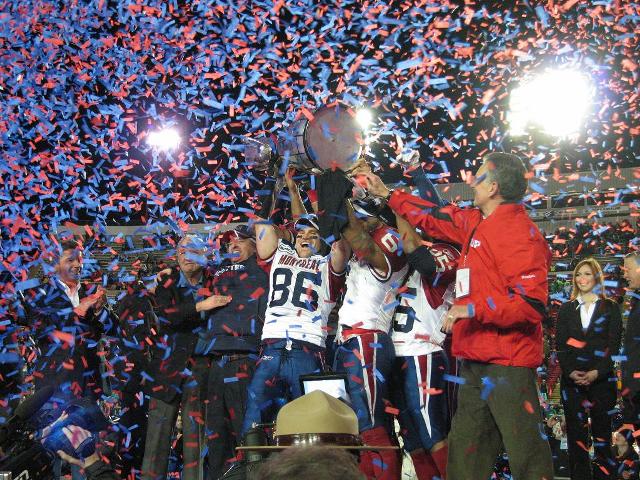 The Canadiens have broken local hearts again and again since their last Stanley Cup win in 1993. The Montreal Impact is playing poorly, and the World Cup hardly fills the void for those of us who want to cheer for a home team. The Montreal Alouettes are a logical choice to replace the city’s passion for the Habs (at least until next season), and not only because the Als have brought home three Grey Cups since 2002.

The stadiums in the Canadian Football League are great places to watch a game. The Als’ home at Molson Stadium is beautifully nestled on the face of Mont-Royal on the McGill Campus. It’s the smallest stadium in the CFL, with a capacity of about 25,000. There is not a bad seat in the house. It has the intimacy of watching a game at small Division IA School in the NCAA.

The players are not exorbitantly paid, with an average salary of $70,000 per year. Most of the players, especially the Canadian ones, have university degrees. CFL players are just regular people with regular jobs, and that’s not something you’ll see much of in other professional leagues.

The tickets are very affordable (between $25 and $185 for individual tickets, and package deals are available). Your average family won’t need to sell their children or seniors or submit to pharmaceutical studies to afford a few tickets.

The promotions are tacky, more reminiscent of Triple A baseball than pro football, but somehow it comes off as amusing and endearing. They’ve even had professional wrestling as part of the half-time entertainment.

The NFL is a drag. Let’s debunk the myths promoted by the National (American) Football League snobs of this city:

The NFL has become known as the No Fun League, as opposed to our Crazy Football League. Our players don’t get fined for dancing in the end zone during a touchdown celebration, for example.

The CFL is mostly gate-revenue-generated, though they do have some good TV deals in place. This means that the fans run the CFL and not large corporations.

Yes, the NFL has better talent, but the CFL is a better game. Here’s why:

The CFL is a higher scoring league than the NFL despite its four downs to gain 10 yards and move the chains for a fresh set of downs. The CFL is criticized for having three downs instead of four; however, the games would have basketball-level scores if that was adopted. The Canadian fields are 10 yards longer between end zones, 12.5 yards wider and the end zones themselves are 10 yards deeper. The Canadian game has 12 men aside as opposed to 11, but the larger field still affords much more room for offensive players to get open. This comparison makes the NFL a tougher game, but a less exciting one.

There are many other rule differences, but here are a few key ones:

There is no fair catch on punt returns in the CFL. The punt returner must be afforded a five-yard cushion so he can catch the ball and run with it. The NFL has only a one-yard cushion so returners will call for a fair catch so opposing players will have to let him catch the ball and not get crushed. The tradeoff is that there is no run-back. The punt return is the most exciting potential play in football, and that is almost always a possibility in the CFL. The CFL has penalties that discourage kicking out of bounds to avoid the efforts of a dangerous punt returner. The NFL allows their offences to put only one man in motion while the CFL allows three. There is a yard offset between the offensive and defensive lines at scrimmage, which gives the offence more time to react as opposed to the neutral zone being the length of the ball in the NFL.

I’ve been to several games south of the border, and their receivers drop plenty of balls, too. There is some serious talent in the CFL as many Heisman trophy winners have failed to make it here.

The Als. We have a new head coach. The talented Tom Higgins has a lot of CFL experience, and a proven track record. There were some disappointments last year due to key injuries on offence to the now-retired quarterback, Anthony Cavillio, now-retired offensive lineman (and civil engineer) Scott Flory, receiver Jamal Richardson and running back Brandon Whitaker.

The bright spots on offence were the emergence of quarterback Tanner Marsh “Madness” and former Heisman Trophy winner Troy Smith.

The son of NFL Legendary receiver Chris Carter, Duron Carter, is somebody you want to see. He is extremely gifted — he runs great deep patterns but needs to hone his shorter routes — and will likely be in the NFL next season.

The Als also have bad boy Chad “Ocho Cinqo” (or “Huit Cinq”) Johnson this year — he might be a better fit for the CFL, as the No Fun League didn’t let him have any fun.

Let’s not forget SJ Green, one of the top receivers in the league.

The defence was the Als’ bright spot last year and will see the return of CFL defensive player of the year Chip Cox, as well as Jerald Brown and Kyries Hebert. Cox was a monster last year.

Now get out there and give your support to a team that deserves it. ■

The regular season begins next Saturday, June 28. For more information, go to the team’s website.