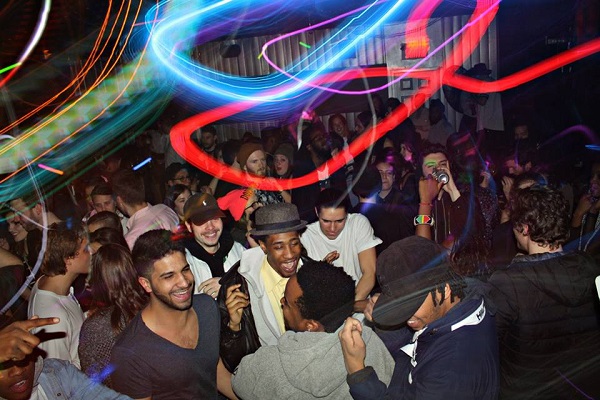 One Night Stand. All photos by Danik Yopp

Things are changing (again) at the Royal Phoenix.

Since Val Desjardins’s departure from the popular Mile End watering hole a year ago, it’s safe to say the bar has had some ups and downs. Popular club nights and events switched venues, staff and management changed and regular patrons found new places to cater to their needs.

But over the past six months, the staff at the Phoenix have been working hard to reclaim their spot in the neighbourhood, creating events and club nights that guarantee a good time and reflect the interests of the locals.

Last week, I had a chat with the Phoenix’s booking manager, Dina Habib, about the changes they’ve made and the new events and club nights they’ve introduced, or will be introducing soon.

Kayla Marie Hillier: When did you start working as the Phoenix’s booking manager?
Dina Habib: I started the official job in mid-December. I was bartending here at an event every two weeks, but my expertise is definitely not bartending, it’s more connecting with different communities, getting people out to certain events, and also production. I’m good at pinpointing specific people that could be good at different things and putting them together to put something out.

KMH: How much have your business studies helped you out with your role at the Phoenix?
DH: It’s partly my business background, but even more than that, my Mediterranean background. Mediterraneans, a lot of the time, love having people over. My grandparents never had a second where there wasn’t some random person at their house. You’re always entertaining. My parents are very adamant about social etiquette.

When people come to the bar, I feel like they’re in my home and I have to make sure that everyone’s happy. I find — not just in other bars, just in general — people will tend to follow the rules. And I’m all about following the rules, but I think if you can bend them just a little bit to make a customer happy, then I don’t see that as being a problem at all. Because I do feel I’m responsible for everyone here and the good time that they’re going to have and the feeling that they’re welcome. I don’t want anyone to feel like they’re not welcome because they’re straight. If you’re here and you’re having a good time and you’re respectful, then I think the least we can do is reciprocate that and make sure that you’re comfortable and that you’re going to come back.

KMH: Do you ever feel like you’ve been handed a bit of a task trying to restore the Phoenix to its former glory?
DH: Absolutely. When the Phoenix first opened it was hugely successful for many reasons. In the last year, though, there were many changes and I feel like the bar had a bit of an identity crisis — I think people felt that, and it worked against us. I feel like my responsibility comes in two forms: making the Phoenix the place to be in the Mile End for a fun time, making sure the bar is profitable but also to give more marginalized groups space — like the queer and underground communities that can’t always have access to certain resources.

Initially, when I arrived at the Phoenix, I wanted as you said, “to restore the Phoenix to its former glory,” but then I realized that we had to sit down and really think about the kind of place we wanted to be so we could be smart, strong and consistent with our branding — and make sure we booked the best nights for the crowd we wanted to get. However, because I’ve been involved in the queer/gay community of Montreal for the past few years, it was very important for me to keep in touch with it and to give many of its key players a place at the Phoenix. Also because of my involvement in the community, I’ve seen all the potential we have and I’m very grateful to be in a position where I can give back and use the Phoenix as a platform of visibility for said talent, as well as other minorities within this group — like QPOCs (Queer People of Colour), which often get sidelined. The business side and the community side often clash but I see it in a complimentary way: let’s use this business opportunity as a platform to advance the causes that are dear to us with visibility and funds generated by events happening in this space, while making sure it sticks around for more parties, workshops…

KMH: What are some events that you’d like to introduce in the future?
DH: I want to do Friday 5 à 7s. During the week people will come after work a lot of the time and have poutine and then they’ll go home earlier. Fridays and Saturdays it’s usually the opposite, where people will go home first and then go out later. So we have a little bit of a lull. But with the summer coming up, I think that will change a little bit.

On the Fridays, I really want to make it into — like our Sundays, a beach bar, maybe have some R&B, chill Afro beats and a bit of electro with mainly girl DJs. It’s also, like, if I want to sit outside with a book or to do work, I don’t feel like I’m out of place. You don’t have to come in for a drink and leave — I go back to the whole house thing. You’re in my environment, you’re at my place. So same thing for outside, if you’re doing work, then maybe you’re just in my living room doing work, while I’m in the kitchen chatting with my friends. That’s really the kind of environment that I want to go for. So for Fridays and Sundays, I want to go for that chill, exotic kind of vibe.

I want the Phoenix to become two things. I want people to see, this is the event, I want to go to it. Where’s it happening? The Phoenix. As opposed to I’m going to the Phoenix, let’s see what happens. But I do want the Phoenix to be your neighbourhood bar. So they feed off each other in a way. Because, if we have the really cool events and people come to them and think, “Every time I go to the Phoenix, it’s fun.” Next time they won’t ask: what’s going on at the Phoenix? They’ll just go. I just don’t want people to think, this is the only gay bar [in the neighbourhood], therefore we’re going to go to it. I want them to go because it’s an amazing time and on top of it, as a bonus, it’s a gay bar.

WHAT’S ON AT ROYAL PHOENIX

Ru-Paul’s Drag Race Screening
Every Tuesday
LIVE COMMENTARY | DRAG | PERFORMANCE | KARAOKE
Host: Connie Lingua (Best Drag Queen #2 in the Best of MTL readers poll)
“Karaoke will remain on Tuesdays but after Ru-Paul’s Drag Race is done, Connie Lingua has other plans for the night. I’m not sure what she’s got planned yet but it’s probably going to be some kind of drag-related performance. But she did wanna do something with makeovers potentially.”

One Night Stand
1st Friday of the month
RAP | JERSEY | EDM | R&B | BASS | TRAP
Resident DJs: Grandbuda, Wifey and Klyde Drexler
Host: Troyka
“It’s similar to Hydromatic in a sense that it also plays trap/hip hop and all of that, but it’s a bit more hipster straight — like more fashion hipster kind of thing. Whereas Hydromatic is more fashion gay. I think One Night Stand has that potential, but it just hasn’t been around long enough. The audience hasn’t made the place their own yet. I think that’s the only reason why it’s not full-on now. It’s just starting out but people still talk to me about that night so I’m really happy with that.”

Maybe Sundays + haricuts
Every Sunday
TRAP | R&B | HIP HOP
Resident DJs: Maybe Later
Hairdresser: Emy Filteau $5–$25
“At first we just had the haircuts. And we saw a significant rise in attendance on Sundays, because a lot of times you won’t come in alone to get your hair cut. It’s a half-hour situation. Most people will come in with two or three friends and they’ll have a drink at the bar, you’ll get your hair did and after that you can just hang out for a little bit. Now we’re adding DJs on top of that and we’re also kind of making this a very lazy but chill environment. What I’m going for is that restaurant or that bar that’s next to the beach, where you just kind of graze.

And our hairdresser, Emy Filteau, who works here actually — her normal job is doing hair and make-up for fashion. So, magazines, different shoots, videos, whatever — that’s her actual expertise. So it’s really fun to have someone who does this professionally and will just give you a good deal, because we don’t take any of their money. So whatever you pay just goes directly to her.”

Thump
2nd Saturday of the month
HOUSE | ELECTRO | TRANCE
Resident DJs: Mark Vincente & Sweet Daddy Luv
“It’s a more mainstream crowd, more gay/queer. It’s also really fun. We have quite a few people coming to it and it’s one of the oldest nights. They’ve had the time to get momentum.”

Toys
New night, Friday, May 23
HIP HOP | TRAP | R&B | HOUSE
Resident DJ: Ryan Playground
Guest DJs: Shaydakiss & Miss Leo
“Ryan Playground plays fucking amazing music, and she’s coming with Shaydakiss. We’ll see how that goes. I would really love it if it became a monthly. This is our first time so we’re going to test it out.

Obviously there is no fashion music but there are artists who put more importance to fashion in their videos and in their personal style. So they’ve kind of created a fashion crew in a sense. And in that way, I think that also comes into what she does. She did a lot of music for the different fashion shows, whether it’s Montreal, Toronto or fashion week and stuff like that. So there’s also that kind of crowd that comes with it.” ■

Make sure you don’t miss out on what’s going on at Royal Phoenix — follow them on Facebook.