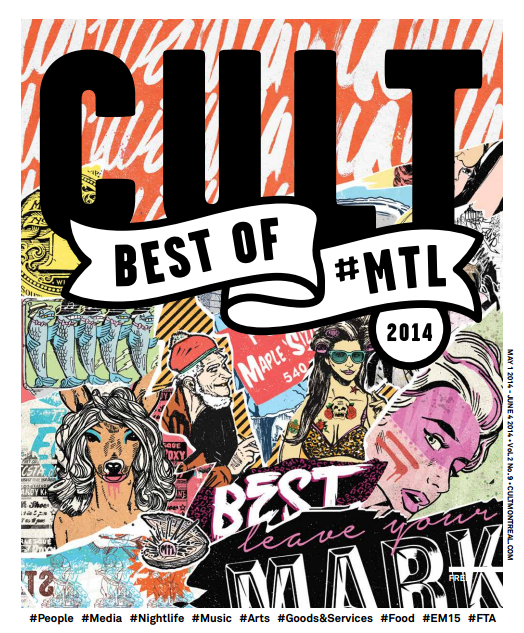 Once again, Montreal has spoken. In April, Cult MTL readers and other savvy citizens voted for the local things they love and respect. We’ve got to thank everyone who voted, and those who helped us get out the vote, whether for their own purposes or simply as a way to spread civic pride. Your participation was staggering.

This readers’ poll was open and democratic, with no editorial influence or interference. While we had to stay neutral regarding the dozens of Facebook campaigns we noticed, we were happy to see so many people make an event of voting, especially during a time when our province was engaged in a particularly ugly election.

Ballot-stuffing was of course frowned upon (and the most egregious examples of this were automatically weeded out by our survey software), but we had to laugh at the joke votes, like the person/people who voted for Denis Coderre in every single category, the band Look Vibrant, who we suspect of epic self-love (they’re a duo, and there were two votes for Look Vibrant in every category) and the voter who turned in a ballot full of filth (“eating Froot Loops out of women’s vaginas” etc).

Keep an eye on Cult MTL — we’ll be running Best of MTL articles through the month of May.

To all the winners in the 150+ categories: congratulations.

Check out the results from last year’s poll here.