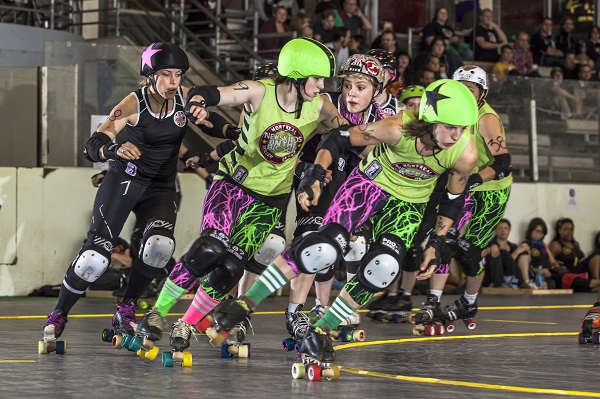 The New Skids on the Block vs. the London Rollergirls. Photo by Tyler Shaw

Making its world premiere at RIDM this week is Derby Crazy Love, a documentary that explores the subculture and history of roller derby while shining a spotlight on Canada’s top team: Montreal’s New Skids on the Block.

The film sits perfectly within the body of work created by Toronto-based Red Queen Productions, a collaboration between award-winning filmmakers Maya Gallus and Justine Pimlott, now in its tenth year. The pair’s first co-production was a series about women’s boxing called Punch Like a Girl, so it’s fitting that they’re revisiting female athletes a decade later.

“Our philosophy is about making films about women and subjects/people who are on the margins and bringing that into the mainstream through our particular lens,” says Gallus. “The roller derby scene is unlike any other sporting event scene. It really is this amazing subculture. It’s this whole DIY community, player-owned and operated — no other sport is like that.”

After attending the very first roller derby World Cup hosted by Toronto in 2011, it became clear to Gallus and Pimlott that they wanted to explore the sport. “Derby is going to the next level. If you haven’t heard about it yet — although I’d be surprised — you’re going to be hearing about it. It’s being taken more seriously as an athletic sport,” says Gallus. “The reason that it’s of interest now is because it’s really about to explode.”

When deliberating over which league to focus on for the documentary, two in particular stood out. “We looked at Toronto, because Toronto has more leagues than anyone. And then we looked at Montreal, because Montreal is the top team. And once we met Montreal, it just became very obvious, I mean, they’re the top team in Canada. So that was the natural story to follow,” explains Gallus.

“There’s this whole subculture in Montreal, with musicians and artists and many people like Val Desjardins and Plastik Patrik who are part of roller derby and also part of the culture. Since we wanted to look at the subculture as well as the sport, that was a natural fit.”

WHO’S YOUR DADDY?
The film focuses primarily on local woman-about-town Val “Smack Daddy” Desjardins, a prominent member of the New Skids on the Block (and MVP at the World Cup), who at the time was recovering from a serious leg injury.

“It was clear from the beginning that she was a charismatic player who would figure to some degree in the film but we didn’t know to what degree we would focus on her. The injury became one of the threads that added some interesting drama to the story — but it was real drama, that any derby player could be dealing with. The fact that they were coming up to the championships and she wanted to play so badly and was so determined. And the fact that after her surgery with 13 pins in her leg, she was still going to play — that became really dramatic. That’s when you really see the level of obsession, if you like, of how passionate someone could be about the sport,” says Gallus.

Desjardins began playing derby after DJing a match six years ago and has worked her way up the ranks since then. She views Derby Crazy Love as a good opportunity to not only document derby culture but a way to get rid of some of the stereotypes associated with the sport. “Maya and Justine really found a nice path in terms of creating a documentary that could expose the whole underbelly of the sport — which is the community and why it’s so special,” she explains. “I think shedding that image with the fishnets and so on, to becoming more serious athletes, and having filmmakers expose what remains of the more spectacle side of it all, and where that comes from, and what it means to the players, is important.”

PHOENIX NO MORE
Specific to Montreal derby culture, and featured prominently in the film, is local watering hole the Royal Phoenix, which was operated by Desjardins at the time of filming, and was essentially created with the derby community in mind. But things change. “Yeah, that’s an important part of the story; that’s very unfortunate,” says Desjardins. “It was my baby and I worked two years full-time on it as a project. I was 25 per cent owner, but I was approached by the [other] owners to do my thing and to be the one to run the bar and bring in the derby girls, then all the queer nights that I wanted and just really take care of the management and programming.

“I was working full-time at the bar and they were supposed to just be investors. But I guess because of the bar’s popularity, their behaviour changed. Some sketchy things happened and I ended up having to get out. So I had to decide to say, ‘See you later; buy me out. I’m getting the fuck out.’ So it’s really… that’s been pretty brutal. The bar is in the film a lot, so it’s going to be really difficult to watch that component, but at least a lot of people in Montreal and a lot of the community that frequented the Royal Phoenix are very aware of the changes. But the film will kind of bring it all back up, I guess.”

Desjardins, who came up with the name for the bar as well as the logo design, was not able to take it with her when she left as the remaining owners registered a trademark while they negotiated her departure. This, of course, has led to some confusion that may be aggravated due to the bar’s role as a location in the film. But the bar is indeed no longer associated in any way with Desjardins or the Montreal roller derby league.

WHAT’S IN A NAME
There are concerns that as roller derby gets more attention that there’ll be a need to get rid of the alter ego nicknames or other theatrical aspects of the sport, but Desjardins explains that it’s up to the athletes to guide that inevitable progression. “Personally — well, for the names, for example, I think it’s important that we clean the names. So names that are either derogatory or sexist both ways — just maybe have a PG version of their names. Some sort of clean-up in terms of making the sport family friendly.

“You’re not either a serious athlete with your real name, in a league, or you’re in the WWF. We can create something outside of that. We can have everything we want but we have to define that and not be gauging ourselves on these standards, from basically just men’s sports.” ■

You can also catch a shorter TV version of the film on Global on Saturday, Nov. 16, 8 p.m.

And if after screening the flick you decide you need to lace up some skates, you should head here for more information. Or you can also check out the official website here.