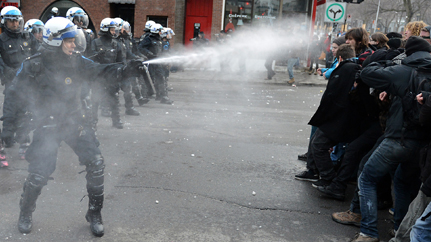 Maple Spring is in the air: The temperatures were mostly above freezing this week, meaning the time was right on Thursday for thousands of students to hit the streets and rage against the austerity machine. No word on whether former student leaders (and now PQ lackeys) Léo Bureau-Blouin and Martine Desjardins were observing Place Émilie-Gamelin from their ivory towers.

Poll story, bro: With only a few days remaining in the campaign, more and more polls are suggesting that Philippe Couillard’s Liberals might win this one in a walk, and the incumbents are bleeding voters on all fronts. Over a million voters cast their ballots in advance polling, so at least people seem excited to exercise their rights.

Zero dim sum game: Quebecor’s resident shitstarting Megyn Kelly equivalent, Sophie Durocher, found something to get riled up about this week after getting the unilingual anglo treatment at dim sum and Indian restaurants around town. Here’s hoping, for her sake, that she only caused a scene after receiving her order.

50 (legal) shades of Grey: Montreal constitutional and human rights lawyer extraordinaire Julius Grey is taking up the cause of university students who were denied the right to vote in the upcoming provincial election. The judge’s decision should be rendered today.