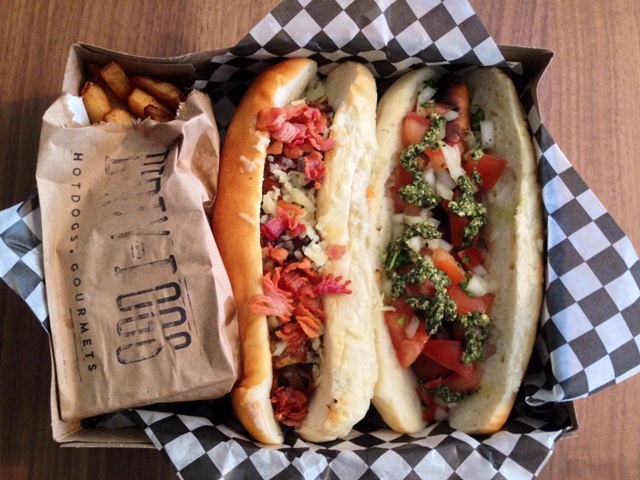 On day two of their brick and mortar existence, the staff at Dirty Dogs (25 Mont-Royal E.) was running on adrenaline after huge crowds turned out for their grand opening on Saturday. The social media buzz happened because Dirty Dogs already has loads of supporters in the city — they’ve existed for about a year as a roving pop-up restaurant, serving up grilled gourmet dogs out of bars and at special events.

The small, wood-panelled space seats nine along its counter, with a TV mounted at the back of the room. We kept an eye on TSN while chatting with the staff as they prepared our meals: a Maurice Richard and a vegetarian-ized James Gandolfini plus sides of duck fat fries and mac ‘n’ cheese — the latter is not pictured because it was devoured too quickly to be photographed.

My man Tim tells me that the Maurice Richard was crispy, tender and delicious enough to justify the price tag — topped with foie gras, bacon, three-year-old cheddar and maple syrup, it’s the priciest dog on offer, at $14; the cheapest is the Denis Coderre at $5, while most cost $7.

My James Gandolfini — with a veggie dog in place of an Italian sausage, and minus the pancetta — was topped with house bruschetta, fresh mozzarella and pesto. You can vegetarian-ize any of the 10 hot dogs on the menu, or order the official veggie dog, named after Rage Against the Machine singer Zach de la Rocha — that was my first choice, but they were out of one of the key toppings, jackfruit — this was one of many items missing when Dirty Dogs opened on Sunday, after Saturday’s rush.

I was skeptical about the softness of the fat, white bun, but it was easy on the teeth, and worked well in tandem with the crunch of the diced onions. The bruschetta and pesto were slightly bitter, though that lent a nice kick to the mouthfuls of gooey bun and slightly smoky, almost sweet veggie sausage.

As for the sides, Tim is a longtime fry connoisseur and was flirting with danger ordering duck fat fries, a dish that once pushed him over the edge of decadence at a certain famous Montreal restaurant. But he didn’t puke this time. The fries were amazing enough that he waived the dipping sauce, and the mac ‘n’ cheese was pornographically luscious, though it could’ve used a splash of something tart to really to really hit home.

We’ll most definitely be back to try the Dirty poutine (made with a duck-stock gravy), the Texas chili and more dirty dogs, first and foremost that elusive Zach de la Rocha. ■