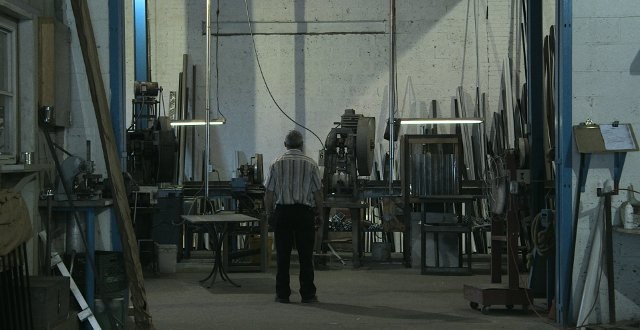 Not because his films are totally inscrutable, resistant to easy interpretation and have long and frequent stretches in which nothing really happens. No, I like all those things.

It’s more because he’s able to pull it off; in 2014 it’s easy enough to be audacious, but he’s also deeply talented, not to mention relentlessly prolific. Oh, and the fact that he’s a film critic turned filmmaker. Yeah, that too. 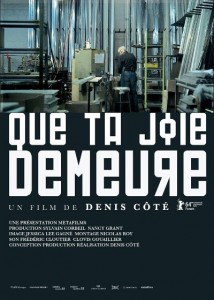 His latest, Que ta joie demeure, hits the screen a mere eight months after the release of his last film, Vic+Flo ont vu un ours. While Vic+Flo was, relatively speaking, more accessible and linear than his other films, Que ta joie demeure swings back into the more experimental corner of Côté’s oeuvre. He once scolded critics for scaring off art-cinema audiences by warning them about difficult viewing, so let me put it this way: approach this with an open mind and you can come away rewarded.

A mix of poetic documentary and pure avant-gardism, with the faintest hint of a narrative sprinkled in, the film is shot in a series of factories. Long, slow shots contemplate the grinding gears of various machinery. Workers go about their work. They take breaks and shoot the shit, talking about their lives. Some of them deliver monologues, seemingly windows into stories we’re only partially privy to. One worker talks about his depression and anxiety about his job. Another repeatedly rehearses a corny homily — “Working never killed anyone, but why take the risk?” — then shouts it from the rafters like a Shakespearean sonnet.

The film seems like a companion piece to 2012’s Bestiaire, which showed the placid lives of animals in captivity. The humans in Que ta joie demeure don’t appear to be doing anything much more meaningful than Bestiaire’s animals pacing their cages. But there’s also a strange, hypnotizing beauty, and a Zen-like calm, in the repetition and minimalism of both films.

Côté is a filmmaker who isn’t afraid to let viewers bring their own interpretation to his work. In fact, with this film he barely leaves you any choice. Watching the elegantly composed shots of industrial gears turning, my mind inevitably wandered to its own places, whether it was the fading grandeur of the vintage machinery or its Freudian sexual imagery — all that pumping and grinding. Then again, maybe it’s just the five-year-old boy in me, but I can spend a long time staring at big machines.

When Côté and I talked about Vic+Flo, he disdained the idea of self-indulgent filmmaking and seemed genuinely hurt by the notion that he didn’t care about his audience. So you have to give him the benefit of the doubt and assume that he’s trying to communicate something. What that is may not be obvious, but he does it beautifully. On the Quebec film scene at least, he’s one of the last true artists left standing. ■