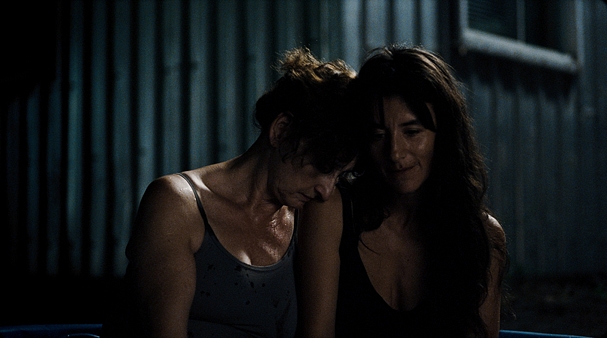 Since he left his job as film critic for since-deceased Montreal weekly Ici to shoot his feature debut Les états nordiques in 2005, Denis Côté has made his mark as one of Quebec film’s most interesting, provocative and talented filmmakers. His latest, Vic+Flo ont vu un ours, is his best yet — it’s his most accessible film, but it retains his unmistakable voice and vision. At this year’s Berlin Film Festival, Vic +Flo won the Alfred Bauer Award, given to films that “open new perspectives on cinematic art.” Sounds about right.

Victoria (Pierrette Robitaille) is a recently released ex-con who relocates to a family cabin in the Quebec woods. Ostensibly taking care of her catatonic uncle (Georges Molnar), she hangs around, occasionally visited by her uptight parole officer (Marc-André Grondin), until her girlfriend Florence (Romane Bohringer) arrives on the scene. But though their reunion is blissful at first, Florence soon turns out to have some serious drama following not far behind. The plot thickens from there, although as Côté says, “it’s more about cinema than about the characters.”

Côté has always been a fearless filmmaker, unafraid to break narrative taboos or to leave audiences guessing, so I was surprised when he told me that Vic +Flo was made partly in reaction to negative response to his last fiction feature, Curling.

“I think it hurt a lot when people were writing that I didn’t care about the audience,” Côté admits. “I hate that kind of poète maudit, making films for yourself. Why don’t you go play guitar in your room and that’s it, you know? So of course I make films for the audience.

“You listen to what they don’t like about the film, of course. So people complain there’s no ending, or there’s nothing going on, and it’s so slow, and you’re like ‘really?’ Consciously or unconsciously, you react to that: this new one will be much more frontal — I’m going to give more information to the viewer, I’m going to make it more entertaining. And now let’s play with genres, and let’s try to repair some mistakes of the past.”

A lot of the film’s strength comes from the cast, a group of players that Côté himself describes as unusual. Robitaille, who’s known mainly for Québécois kitsch comedy, gives a tormented and deeply dramatic performance. French arthouse star Bohringer (who stepped in four months before production when another actress bailed out) is the film’s unpredictable live wire. And the normally casual-chic Grondin gives a tightly controlled turn, almost unrecognizable with a shaved head and a goatee Côté accurately describes as donut-shaped. “But it’s really funny,” he laughs. “Here, girls are like ‘Eww!’ and in France, they’re like ‘He’s so hot.’”

The film was made with a $2-million budget, tiny by Hollywood standards but big-time for Côté, whose last film, the experimental doc Bestiaire, was shot on digital with a three-person crew. Vic +Flo was shot on the increasingly rare format of 35mm film. “I don’t want to be a purist or dogmatic about it,” he says, “but you have a level of respect on set that’s a bit different.”

But Côté isn’t complaining about big budgets — or small ones. Most low-budget filmmakers, he suggests, “are like ‘We did what we could with that amount of money.’ Me, it’s more like, ‘just give me what you have and we’ll make a film out of it,’ you know? It’s very DIY in my head.”

As our conversation wraps up, I ask him about the film’s unusual title. “It came very early,” he says. “I knew it would be a film with a lot of tones, a lot of energies — funny, drama, horror, grotesque, everything. So what I like about the title is you’re put on the wrong path somehow. Are Vic and Flo men, women, animals? ‘Vic and Flo saw a bear’ — it sounds like a children’s movie, an animation film. ‘Saw a bear’ — there’s a notion of menace somehow. I think the title is very playful. In the end it makes sense, but until you’ve seen the film, you have no clue,” he laughs.

“It’s funny, I just saw this Paul Newman film from 1972, The Effect of Gamma Rays on Man-in-the-Moon Marigolds. It’s totally unknown, but I thought, man, if Paul Newman can have that title, I can have Vic et Flo.” ■