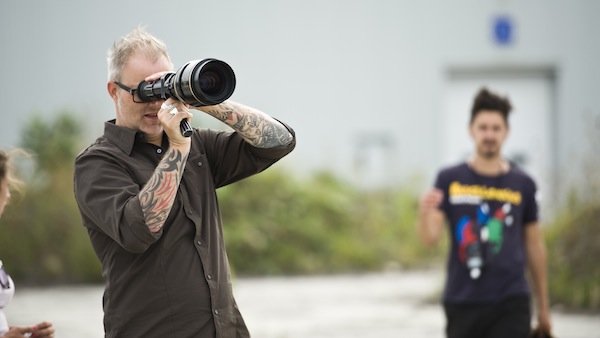 Denis Côté on the set of his latest film. Photo by Yannick Grandmont.

Denis Côté is one of the most talented filmmakers working in Quebec today, and inarguably one of the boldest. After several years as a film critic for the since-folded francophone weekly paper Ici, during which time he also made several shorts, Côté lived many a critic’s dream when he left to devote himself to filmmaking full-time.

Since then he’s kept busy, making six features since 2005, which have screened extensively on the international festival circuit. The latest, last year’s Bestiaire, is his most provocative — it consists entirely of footage of animals hanging around in various sanctuaries, farms and zoos doing next to nothing, with no music or explanatory voice-over — but also one of his most celebrated, praised in the New York Times and elsewhere.

This month, the fine folks at the PHI Centre invited Côté to curate  a program of his favourite contemporary films for a “carte blanche” screening series. Launched last week, the series continues tonight with critically acclaimed U.S. indie Tchoupitoulas and runs through Jan. 30 with a variety of intriguing international selections; see the full program and schedule here.

During the final leg of editing his latest film, Vic & Flo ont vu un ours, the always plain-spoken and candid Côté took the time to answer a few questions about the series via email.

Cult MTL: Where did you come across these films, and what was it about them that attracted you?

Denis Côté: These are all coups de coeur discovered here and there, at events and festivals around the world. One who is familiar with my own films will instantly see why these films are appealing to me. They are all exceptionally free and usually bordering on the experimental.

Cult: Do the films have elements in common?

DC: Most of them are well-known on the circuit but somehow — apart from Two Years at Sea — they were not shown in Montreal. I wanted to show something new, there was no point in programming well-known chefs d’oeuvre. I also think that, secretly, I’d like to be the creator of these films!

Cult: Why do you think these films haven’t gotten a proper theatrical release in Montreal?

DC: I’ve lost hope in distribution in Montreal. Most distributors don’t have the knowledge, are too shy or too business-driven to take interest in these little gems. As for fests, I think they do a good job. These films fell through the cracks of programming and that’s it.

Cult: You’ve spoken about it being hard for a certain kind of film to reach an audience here; why do you think that is?

DC: I’m travelling a lot. I wouldn’t say Montreal is worse than worst, but cinephilia has definitely been suffering here for a good 10 years. The people in charge of teaching, proposing, producing, distributing, screening, sharing new edgy film experiences are having a real hard time. All we need is one individual in one mainstream media to promote a certain type of film without addressing warnings and warnings and warnings.

(Asked in a follow-up to clarify if he means critical warnings to readers about films being difficult, Côté replies: “yes.” Ouch.)

Cult: Can you tell us about what you’re working on at the moment?

DC: We are rushing to finish Vic & Flo ont vu un ours. It will be in competition in the next Berlinale Feb 7-17. Then I can expect a stretch of festivals around the world. ■