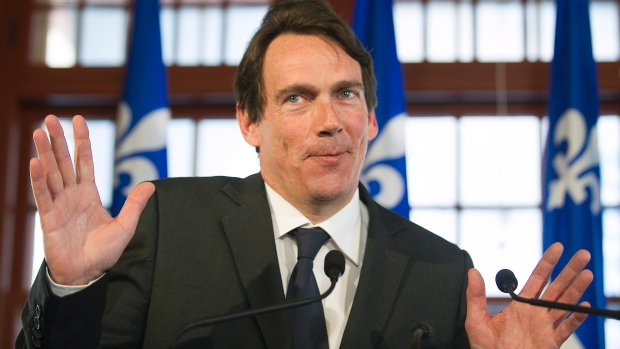 I joked last fall that Quebec media czar Pierre Karl Péladeau would defy speculation that he wants to be Premier Pauline Marois’s successor because “the last thing he wants is a demotion.”

This week we learned that the King of Quebec thinks he has found a way around that little problem. After announcing he was running for the Parti Québécois in St. Jérôme — a candidacy he vehemently denied just 11 days earlier — Péladeau also made it clear that he’s going to keep his media empire no matter what.

And the milk, the cow, the farmer and the farm.

Considering how much ink has been spilled over PKP’s political ambitions, the most surprising thing about his decision to run is that it was treated as a big surprise! He’s been setting the stage for a run at power for years now, and his appointment by Marois as chairman of Hydro-Québec a year ago was the penultimate part of the plan. He was even invited to attend meetings of a special cabinet committee, a privilege occasionally granted the Hydro CEO, but never to the occupant of the prosaic post of Hydro chairman.

No, the only reason to be surprised is if you believed Péladeau’s categorical denial on Feb. 26 that he was running at all.

What was surprising, however, is that neither PKP nor Marois seem to have given a moment’s thought to the controversy that would erupt over his decision to keep his controlling interest in the Quebecor empire, should he be elected. That was evident in PKP’s original response that he would “never” sell his shares in the family business, tempered a short while later with a statement that he would respect — like any other peasant — the government’s ethical rules about conflict of interest.

That statement shifted a titanic burden onto the shoulders of a single man, Ethics Commissioner Jacques Saint-Laurent. Under the law governing the National Assembly’s code of ethics and conduct, Saint-Laurent would be empowered to rule whether PKP’s offer to place his assets in a blind trust would be sufficient to assure his integrity. If not, he could order MNA Péladeau to sell his interests in Quebecor and its hundreds of tendrils, which reach into 40 per cent of Quebec media outlets and a substantial chunk of Quebec’s cultural industries.

“Not only must justice be done; it must also be seen to be done.” That legal-political aphorism will be much on Saint-Laurent’s mind if he has to decide the fate of the flagship of Quebec Inc. Because, fairly or unfairly, any decision to allow the King to keep his kingdom would be seen by many as clear evidence that corporations like Quebecor already control the Quebec government, right down to its commissioner of ethics.

For justice to be seen to be done, Saint-Laurent would have no choice but to order Péladeau to choose between selling his shares or resigning as a Member of the National Assembly.

There are lots of reasons why PKP needs to divest himself of his media and cultural holdings if he wants to hold public office.

A key argument is that a blind trust will never be enough to eliminate the conflict of interest inherent in his continued ownership of one of the Quebec economy’s biggest players. As long as he keeps controlling interest — or significant shares — in Quebecor, he will have a conflict of interest in every government file that affects the company’s bottom line, from setting the minimum wage to reforming corporate taxes to purchasing advertising to choosing high school textbooks.

A blind trust only takes his hand off the rudder, it doesn’t magically transport him off of his own oceanliner.

The other major reason Péladeau has to sell is the enormous influence that his media holdings have in Quebec society. He’s not running a cheese shop, he’s the owner of the province’s most-read newspapers and wire services,  popular television stations, a cable news network, its biggest cable company, etc.

Even though he says he won’t be involved in making editorial decisions at those institutions, PKP doesn’t need to. He has successfully shaped those media over the years through his corporate culture and his choice of managers. The Journal de Montréal will not suddenly shake off its blue-collar, blue-neck image to replace it with a Canadian flag and pom-poms. In other words, in the absence of its its creator, the Quebecor behemoth will continue to follow the course set for it by the manic micromanager who wants to become the next premier of Quebec.

Of course, media like Quebecor’s Journal and LCN and TVA are not monoliths. They allow a modest range of opinions, even under PKP’s stewardship. But the influence exercised by modern media isn’t limited to their columnists, editorialists or bloggers. Influence and the shaping of public opinion comes through the choice of what issues to cover, who is chosen to report on them, and what angles the managers allow to make it to their websites, newspapers, magazine and airwaves.

The people who will continue to make those decisions owe their jobs to Péladeau. They were chosen for their worldview as much as their wordsmanship. And even if they dared divert from the pre-set course after PKP has left the corner office, they know from PK himself that he’ll be back one day. Reckoning Day, no doubt, for those who manage to piss off the man who would be both king and prime minister.

If Quebecor media outlets are ever expected to exercise true editorial autonomy, that threat of his return must be removed.

What if the unthinkable happens? What if Péladeau uncharacteristically agrees to become just your average multimillionaire politician, with no vested interest in companies that profit from government policy and no undue influence over major media? Would that ensure that all of his decisions and actions would be motivated solely by the best interests of the population?

Of course not. We are shaped by our history, and Péladeau’s history is one of privilege and patriarchy. As one of the key members of Quebec Inc., he has spent decades building his own fortunes and conspiring with his fellow captains of industry to manipulate the levers of power in their own interests.

Those are the interests he will represent, promote and defend as he pushes the formerly social-democratic Parti Québécois on a sharp right turn.

Responding at his campaign-launch news conference to his portrayal as a right-wing, union-busting manager, Péladeau trotted out a Bernard Landry quip that had no doubt  been burning a hole in his pocket.

“Neither left nor right, but forward.”

Full-speed ahead, no doubt, on a hidden course of his own design. ■