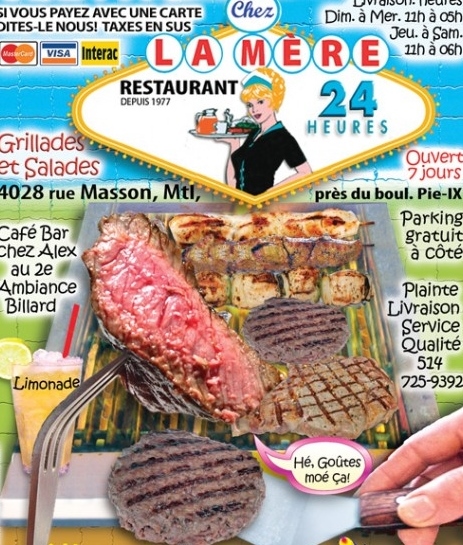 Whether you’ve stumbled home drunk and forgot to pick up fast food on the way or your sleep schedule makes you crave lumberjack breakfasts before dawn, there are late-night restaurants ready to serve you. These four restaurants collectively cover most of the island, and we can vouch for them, too:

George has been serving up quality Greek eats in NDG since 1977. Chicken, lamb and pork souvlaki pitas and gyros, calamari, spanakopita, Greek salad and casse-croûte staples, offered à la carte or in dozens of potential combos, are just a phone call away.

Angela is a rare find for Montreal: a late-night pizzeria run by actual Italians. In a city known for its mediocre slices, Angela deserves props for getting the pizza sauce so right. Also on the menu: Greek stuff, grilled brochettes, 10 kinds of poutines, omelettes and the usual casse-croûte heart-stoppers. Speaking of which, they also deliver cigarettes.

This Greek place on Jean-Talon E. is the kind that’s so stacked with greasy choice, they even have a Chinese section. You should probably stick to the five-pound Greek salad, the poutines and the seafood plates, if you’re feeling fancy.

This 24-hour Rosemont spot has a sprawling menu, too, with all the artery-clogging goup you can imagine, including whatever “Chinoiseries” are. We’d rather steer you to one of their dozen varieties of  poutine or half a dozen takes on the club sandwich — this is pretty stellar stuff, even if you’re sober.