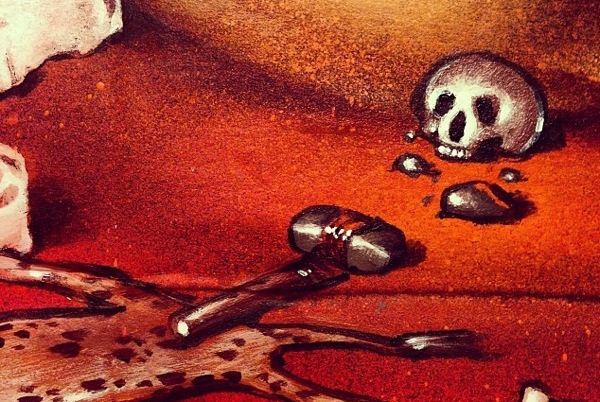 A new show at Station 16 brings new spirit to a very old form. Curated by local graffiti/outdoor art icon Omen, M(omen)to Mori brings together a slew of Montreal artists from different backgrounds and art practices, each adding their own slant to traditional still life iconography and channelling the styles and preoccupations of old master painters.

The show is themed around and named for memento mori, a Latin phrase that means “remember that you will die.” “Still life artists would include them as a reference to the passage of time,” Omen explains.

Popular in the Middle Ages, these small symbols of mortality — skulls, “death clocks” and cadavers were commonly used emblems — reminded the devout to stay right with the Church, because divine judgment awaits after inevitable death. Similar images are still central in quasi-religious occasions like the Mexican Day of the Dead.

“I have a good cross-section of friends in the art world,” he continues. “I invited them because I wanted to see what they would come up with. It was also throwing down a gauntlet — do what you would usually do, but in these terms.”

He rallied an impressive roster of 16 artists and friends, including Heiidi Taillefer, Jason Botkin, Kevin Ledo, Tyler Rauman and Whatisadam, who all created new pieces for the show to very different effect.

Omen himself contributed “one huge fucking piece,” a large painting that channels older practices and forms, yet brings graffiti into the aesthetic mix as well. “It’s a pain in the ass because it’s on raw canvas and it’s done in the Old Masters style, but it’s all in spray paint.”

Keen to keep the exhibit as much a surprise as possible, the final works remain under wraps until the big reveal at the vernissage on Wednesday (the image above is a detail from a work, released by the gallery as a teaser of sorts).

“It’s kind of interesting,” Omen says. “Some people either addressed the topic but didn’t go too far astray from what they would usually do, and some people did some pretty impressive stuff, which I was kind of hoping for.” ■