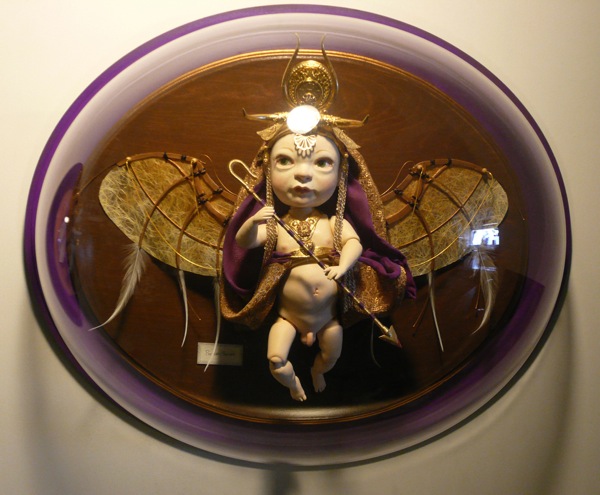 “As an artist, you really think of your work in and of itself, and you also kind of think about how it fits in with the market, if it’s going to be realistic to do this or not,” Heidi Taillefer says, of her relationship with the local art scene. We talked over lattes as she prepared to open a show at L.A.’s prestigious CoproGallery, a hub of the pop surrealist art movement.

The Montreal artist’s prodigious output has been shown in a lot of big-name American galleries, but it’s been awhile since she’s had an exhibition here. While she was affiliated with the Yves Laroche gallery for several years, as the gallery shifted their focus toward a more international stable of big-name underground artists, she turned her attention toward venues south of the border. It’s a very Canadian way of thinking, in a way — as if you haven’t fully succeeded unless you’ve done so abroad.

Taillefer’s paintings are figurative, often combining organic or biological and mechanical elements in epic detail, while referencing a rich body of representational imagery. Her approach could be described as pop surrealism’s take on classical symbolism, although she says she never set out to engage with the artistic movement, a loose affiliation of artists who integrate irreverent pop cultural references into their work, playfully juxtaposing the cute and horrific.

In 2004, Taillefer was part of a group show at Yves Laroche, a collection of very contemporary artists whose work referenced street art and pop surrealist styles. “They took an ad out in Juxtapoz magazine, and they got a huge response from it. After the show, the gallery decided to adopt this as their defining style,” she explains.

“When I originally started showing in the gallery, it wasn’t pop surrealist at all. There were one or two artists who did work that was a bit avant-garde, but for the most part it was really traditional, Old Montreal sort of stuff. So my work really stood out as a result,” she says. With Yves Laroche’s self-transformation in the mid-aughts, including a move from the stuffy old port to their beautiful new space in Little Italy, Taillefer continued to show work in the States, while remaining an active member of the Décover and En Masse artists’ collectives locally.

Her solo show at Copro, The Land of the Blind, references the symbolism of desire or eros in its many permutations, based around the vintage valentine-style cupid dolls she cast for the show.

“Everything is anchored around the series of dolls. There are twice as many paintings, but the dolls are what really drive the bulk of the exhibition,” she reveals. Taillefer painstakingly hand-sculpted the first cherub from clay, then molded it and cast copies in hydrocal. Each doll is intricately decorated, decked out in Swarovski crystals and swishy Christian Dior fabrics, then mounted, accessorized and painted to reflect some aspect of the exhibit’s organizing motif, desire.

“Eros isn’t really love, it’s kind of more desire; it’s all skewed and distorted and misunderstood,” she explains. “Eros is desire, and then desire can show up as jealousy, anger, hope.

“The title, The Land of the Blind, is because love is blind, and it’s sort of a play on the expression, ‘in the land of the blind the one-eyed man is king.’ It’s to highlight the imperfections inherent in Eros.”

While Taillefer’s work continues to be recognized beyond Montreal — the prominent and hyper-edgy Marlborough Chelsea gallery has even expressed an interest in showing her, a coup for any artist — she is also interested in bringing the work back home.

“I thought, well, now that I’ve gone way out and been showing in all these spaces, then a lot of these international artists that have been brought in here, and maybe it’s time to come back and start showing here again.” ■

The Land of the Blind is on display March 23 – April 13 at CoproGallery, Santa Monica