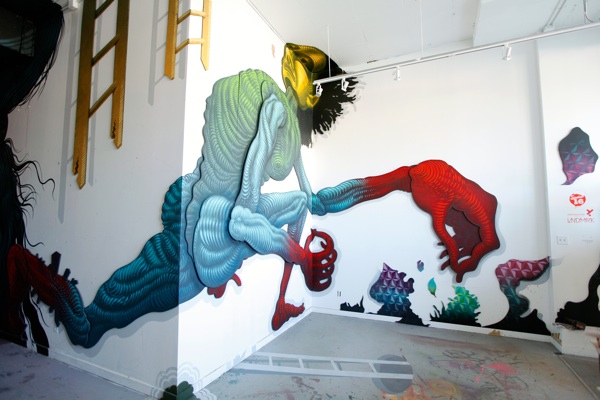 Walk through the jaws of the massive figure that guards Jason Botkin’s latest solo exhibit ALLKIN, and just like when Dorothy stepped from her sepia-toned farmhouse into the Technicolor world of Oz, the explosive colour palette that lies on the other side confirms that you’re somewhere very far from home.

Of course, you wouldn’t be the only one. Botkin, a co-founder and creative participant in the street art collective En Masse, has spent the past three years painting in the group’s signature black-and-white style. And while the otherworldly installations from his 2010 solo exhibit Last Minute bear a family resemblance to the foot-to-ceiling characters and metre-high masks that inhabit the ALLKIN world, the use of colour in a full exhibit is something new for both artist and audience.

“I don’t think I ever really worked with colour that much in my practice,” Botkin said at the LNDMRK gallery space on Friday. “When I went to art school in Calgary, charcoal was the cheapest thing I could find, so I worked with that,” he said. “And when I did my show [TRANS]FORMATIONS, that’s when I started the En Masse project, and that was the first time I moved into illustrative territory.”

En Masse’s mandate to bring artists together through collective, large-scale murals has taken the group as far as Edmonton, San Diego and New York, and granted young artists exposure through exhibits presented in collaboration with the Montreal Museum of Fine Arts and the Art Souterrain festival, as well as through mural commissions like one which graces the exterior of Espace Go.

“The last three years have been dedicated to En Masse, making sure it gets on its feet and making sure it can travel and go wherever it wants to go, but it needed a lot of love to get there,” he explaind.

“Every couple of years there is a group of artists that really congeals and travels around, and the En Masse project is so educational for all of us. I learn so much from these guys, just watching the way they work together, and from getting to play with other artists in a non-competitive way,” he said.

“It does a lot of good things for you to be confident as an artist. It revitalizes a sense of play in your work, and certainly for me, I’m less preoccupied with editorial thoughts about what I’m doing. I’m much more intuitive. I’ll just say, ‘I’ll do this,’ and there’s a lot less prep time in terms of making something. It just sort of flows.”

With just two months to prepare ALLKIN, Botkin spent much of December 2012 at the Art Basel festival in Miami with local artistic consulting and art integration group LNDMRK, which is hosting Botkin’s exhibit at their Montreal gallery space in collaboration with the avant-garde gallery Yves Laroche. 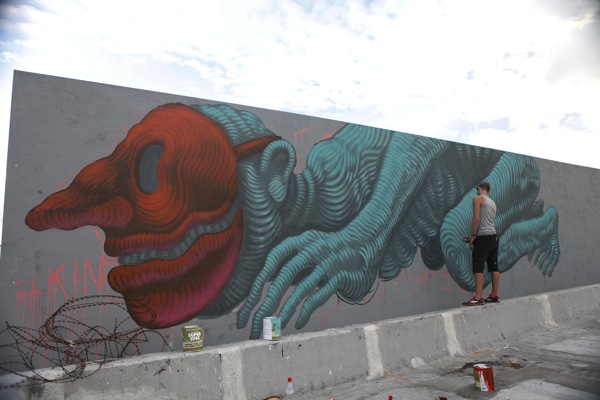 It was during a mural painting in Miami that the first splashes of colour that would later become ALLKIN started to appear. “Because part of the LNDMRK mandate is taking artists from Montreal and exposing them to international platforms, we started off the project going to Miami. I went down with about 15 big wheatpastes that I wanted to put up all over town, but really, painting that mural was the highlight of the Miami trip.

“I started off with colour [for that mural] and then coming into the show here, I just had to dive into it. But I love using colour. It’s more complex in terms of how the colour fits with itself, but coming from rooting oneself in black and white, especially with tones, it’s not so different.”

Botkin has teamed up with local silk-screen company and workshop Station 16 to produce 24 high-quality prints for sale at the vernissage, as well as several one-of-a-kind wooden masks that reflect ALLKIN’s colour palette and playful, yet eerie, character art.

It’s a new direction informed by new lessons, and as a solo exhibit, the titleALLKINis relatively straightforward — it’s all new, but all Botkin.

But hearing Botkin’s enthusiasm when he speaks about influences as diverse as young, contemporary Montreal artists, 20th-century Mexican muralism and the curiosity and creativity of his own children, an argument could be made for a reading into the kinship of artists as a whole — a collective creative energy with which Botkin, and his work, teem.

“What’s exciting is that I see so many people with an urgency to share their work, outside of the gallery space, to put it out there and say, this is what I’m doing,” he says. “Some of it is political, some of it is beautiful, some of it is not, but there is the goal to communicate and share that’s there all the time.” ■