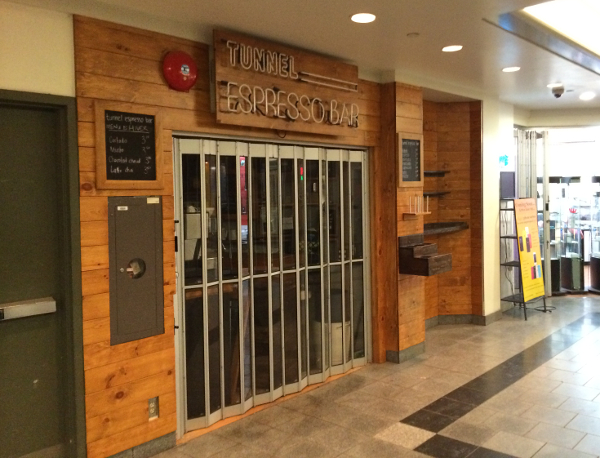 We’ve made no secret of our disdain for — or, at least, disappointment with — the underground city. And, truth be told, neither have you. The collection of malls is home to a series of lackluster stores (including a David’s Tea imitator, Caesars Tea) and a collection of dismal food courts, the best of which, beneath Simons, offers a half-decent Italian place. Even in the bitter cold, we’d sooner go anywhere else.

But last spring, things began to change. Tunnel Espresso Bar, a legitimate coffee place, opened in the tunnel (duh) connecting the Eaton Centre to Place Ville-Marie. And though the Caribbean place in the same stretch of mall shut its doors, we recently noticed that another new spot had set up shop in the vicinity: le Burger Faktorie, a place that, as you might guess, specializes in hamburgers.

Its website’s copy is fairly direct, calling its meat-and-bun combo “the Best Burger in Montreal.” It also tells the viewer, “Shhh it’s a Secret!” Because, yeah, it’s hidden. And we get it — that’s sort of the point. But it’s also sort of dumb.

Naively, my dining companion and I trekked out to the mall on a Monday evening, after work. It was maybe 7 p.m., and while many stores were open, others were closed. The same went for the normal food court suspects. We figured we would try our luck, though, since we didn’t feel like making the trip twice, mostly because it’s cold but also because we’re lazy — especially when it’s cold.

We were going to make some kind of “date” out of it. A burger and coffee at the mall. Unfortunately, we arrived to find the espresso bar closed and the burger joint in the process of calling it a day. So it wasn’t meant to be.

But, honestly, the quality of these restaurants is almost beside the point. Even without trying them, we can say with a reasonable degree of certainty that they’re better than pretty much anything else in the area, provided you don’t have to brave the #polarvortex or whatever to get it.

Does the fact that two faintly interesting offerings opened in one of its unsung hallways signal some kind of turning point for the underground city? Probably not. It’s also unfortunate that, being that both are in a mall, neither the burger joint nor the espresso bar can keep longer hours. But hey, they’re both an option. And we can always use more of those. ■