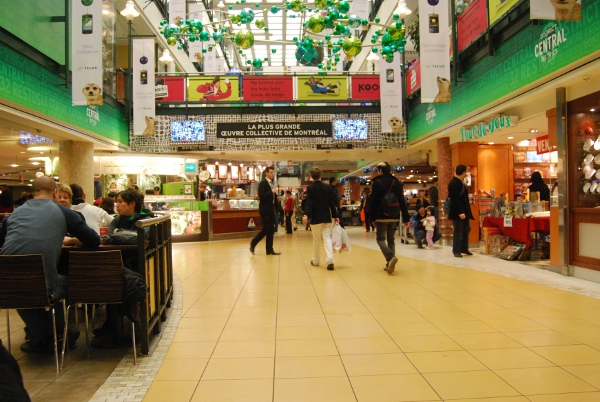 Tourism propaganda and bad guidebooks have long sold the city as a centre of culture, a hub of festivals and a wintry, French-speaking paradise. And in its unrelenting push for tourist dollars, Montreal has also convinced would-be visitors that they’ll be able to wander a sort of parallel downtown, one that exists beneath the ground, that it bills as an underground city.

But as anyone who lives here knows, this so-called subterranean metropolis is nothing more than a series of interconnected malls and food courts. Some tourists, however, only learn this the hard way. Here, compiled from Yelp and TripAdvisor and presented without comment, are a few visitors’ takes on the letdown that is downtown’s underground.

[box type=”shadow”]If you don’t mind a wall-to-wall mall environment, that is. Overheated, no natural light, the smell of food courts. Useful to stay warm when crossing downtown on foot.[/box]

[box type=”shadow”]I don’t know – maybe some flea markets? But this was literally an extended version of NYC’s subway system – several tunnels leading to an entrance to either a subway or a mall…[/box]

“Perhaps if I had visited in the winter I would have been more impressed.”

[box type=”shadow”]It is essentially a series of connected malls (and the University of course), and offers the same stores with shameless repetition. There are limited stores which are not chains, so if you are visiting from anywhere in Canada this will not offer a unique shopping experience with few exceptions.[/box]

“I found this place bloody difficult to find!”

[box type=”shadow”]Maybe I just didn’t understand the concept but I thought that I’d be able to zip down after a visit to the museum and at the point on my map where it said there was an entrance, I’d be able to pop underground. Well, I spent nearly 2 hours looking for the ruddy place! I was finally headed back to the hotel when, by lucky chance, I found an entrance! Yay!!! I was more interested in the Underground City as, well, an underground city than I was interested in it as a mall. The concept fascinates me and I wanted to see what it was like. But unfortunately, once you’re in it you forget that you’re underground and just feel like you’re in a mall.[/box]

[box type=”shadow”]“It’s an underground mall with many exits. I tried the poutine (poo-TEEN) for the first time in the food court, it’s pretty good. French fries with cheese curds covered with brown gravy, delicious!”[/box]

“If you miss one Aldo shoe store, just keep walking”

[box type=”shadow”]I don’t get what people are talking about when they talk about the underground city (much less as an actual tourist attraction). Tourists all know about it but ask any Montrealer and they scoff at the very idea. The “underground city” is nothing more than a series of interconnected shopping malls on St. Catherine in the downtown of Montreal. Lots of boring, overpriced stores (just remember: if you miss one Aldo shoe store, just keeping walking and you’ll be sure to find another) and crappy food courts. Sure, wandering through that dizzying maze of consumer nothingness is preferable to walking outside when it’s 30 below in February but that’s not saying much now, is it?[/box]

“What’s all the fuss about?”

[box type=”shadow”]The Underground City is often touted in articles about Montreal. I don’t get it. It’s a bunch of interconnected shopping malls. Big whoop.[/box]

[box type=”shadow”]A network of tunnels, with a couple Second Cups and handbags stores… Wow! The Underground city if far from having the complexity and dynamism that its name implies… And aside from its practicality, it’s usually just a smelly, ugly way to get from a building to another without needing a coat in winter. Get over it…[/box]