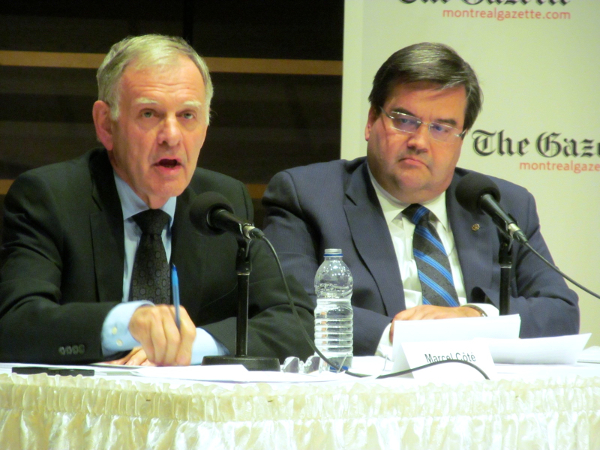 “Ninety per cent of politicians give the other ten per cent a bad reputation.” —Henry Kissinger, Richard Nixon’s Secretary of State

Montreal mayoralty hopeful Denis Coderre has repeatedly said during this election campaign that he doesn’t believe in “guilt by association.”

Whether Coderre chooses to believes in it or not, it is not unreasonable to judge a person by the company they keep. That is what forced former mayor Gérald Tremblay to step down in the end. No one accused him personally of corruption, but plenty condemned him for turning a blind eye to the grift that cost the city more than $100-million a year while he was in charge.

On Monday evening, we found out that one of Coderre’s recycled candidates, incumbent St-Léonard city councillor Robert Zambito, is being investigated by the UPAC anti-corruption squad for an alleged bribe attempt in 2010. The person who has accused him of offering the bribe is Bernard Blanchet, one of seven former Union Montreal councillors now running as part of Marcel Côté’s Coalition Montréal.

Why did Blanchet keep the allegations quiet for three years while he continued to sit as Zambito’s colleague? According to Côté, it’s because he was waiting for police to conduct their investigation. Meanwhile, Projet Montréal’s Richard Bergeron told La Presse that Blanchet’s city council pay almost tripled since 2010, thanks to lucrative committee appointments from the Tremblay administration. Draw your own conclusions.

Did you see the interview with British comedian/actor Russell Brand that went viral last week? In it, he forcefully defends his refusal to vote, arguing that casting a ballot essentially condones a system that has miserably failed to improve the lives of vast segments of the population.

Brand captured the frustration so many of us have with political systems that seem to only serve the wealthy, the greedy and the corrupt.  It’s certainly not a new argument; my favourite is anarchist Emma Goldman’s quip: “If voting changed anything, they’d make it illegal.”

But then there’s a slightly older observation from Plato: “One of the penalties for refusing to participate in politics is that you end up being governed by your inferiors.”

On Sunday — with you or without you — Montrealers will elect 103 people to city hall, including the mayor, 46 city councillors, 18 borough mayors and 38 borough councillors.

How many of those will be honest public servants, working for the betterment of the communities they serve? If you believe Kissinger, about a dozen. But the number doesn’t have to be that low. This election is providing Montrealers with an opportunity to push the old guard out of power, to send some professional politicians packing. Do ex-Union Montreal councillors — who, like their former boss, either ignored or condoned or were blind to the backroom deals that literally stole your money — deserve another shot at managing it?

It may be guilt by association, but so what? We are perfectly justified in making the assumption that the people who worked hand in hand with the rotten apples may well have a tainted core themselves. We don’t have to give them the benefit of the doubt, risking another bite when there are plenty of shiny new apples to choose from.

Coderre and Côté argue that we need the experience these councillors bring, but don’t you think experience could be a large part of the problem?

Normally, this is where a columnist might tell you which party he thinks you should support in Sunday’s election. I’m not going to do that, though, because I’ve never liked the municipal party system and I don’t believe you should pick your local candidates based solely on whether you like their leader.

(But I’ll tell you who I don’t like for mayor! Côté keeps insisting we should support him because he’s a good manager, but managers are people you hire, not people you elect. And Coderre keeps bragging that after 16 years in Ottawa, he knows how the political system works. He apparently thinks that’s a good thing.)

Montreal’s system fortunately allows you to cast separate ballots for mayor, city councillor, borough mayor and borough councillor(s). When I voted in the advance poll last Sunday, I split my support, choosing the people who I thought would best represent my needs and values, regardless of party affiliation.

I made that determination based on discussions I’d had with candidates who knocked on my door, but also by checking bios on the party web sites and doing a little research on the ones I thought might deserve support.

So if you want more information before making your choice on Sunday, we have prepared a little election resource that will connect you to the websites of the five official parties and the bios of their local candidates. As well, we’ve provided a link to the Élection Montréal website, where you can find the names of everyone who will appear on the ballots in your district, and links to the websites of the independent candidates for mayor.

The next step is yours. ■