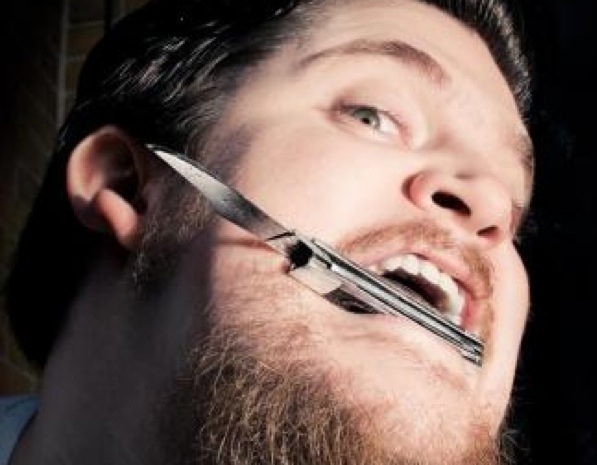 Now, Lyng has taken the essence of that successful stage show — which was basically just him alone on a darkened stage manically extolling the virtues of a franchise of action films he had conceived — and adapted it into Night Fight, a new monthly live late-night talk and variety show making its debut tonight at Mainline Theatre.

“I want it to have the darkness of a Johnny Cash Christmas Special,” he says, once again confirming his status as one of the city’s most creative pitchmen. “Knife Fight was me screaming and shouting at the audience for 30 minutes, and I want this to have that same aggressive absurdity. I also want the Knife Fight aesthetic, or lack thereof.”

Lyng says it will follow the traditional late-night talk show format people are largely used to: he’ll start with a monologue, do some prepared comedy bits, engage in awkward banter with musical director Leighland Beckman, interview guests and end the show with a musical performance. He even intends to put his weird spin on late-night staples, such as his Top 38 list and Subheadlines. For tonight’s inaugural edition, Lyng will interview professional wrestlers Giant Tiger and Twiggy, and Nick Raz of the BCASA will be the musical guest.

“I like Letterman, but I also really like Charlie Rose,” he says. “I want there to be what seems like a serious interview element to the show.” The variety part of the show, he says, comes from the wide range of guests (so, not just his comedy buddies) that he plans to invite to future programs.

And although the word “knife” isn’t included in the title this time around, don’t expect Lyng signature’s item to be completely stricken from proceedings. “There’s a good chance that I might injure myself one way or another,” he says. “I intend to teach the crowd a signature stupid knife trick.” ■