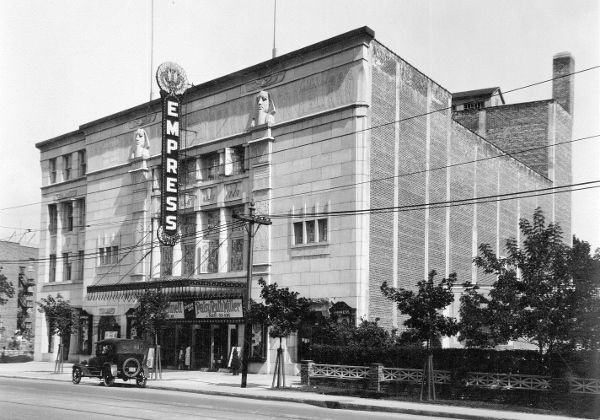 The Empress a long, long time ago

Many plans, proposals and promises have come and gone over the last 21 years, most recently by the group calling itself the Empress Cultural Centre, which made efforts to revitalize the space for roughly a decade. Last fall, in a move that upset Projet Montréal and some local activists, the city handed the Empress over to a new group, whose plan sounds like it may actually work. Of course, NDG kids like myself have reason to be skeptical, but here’s hoping.

Feast your eyes on Cinema NDG, a proposal revealed by project manager Elaine Ethier at an NDG Arts Week event on Sunday.

Lorraine Carpenter: What stage is this project at right now?
Elaine Ethier: We’re fairly far ahead in the financing stage. It’s an expensive project, so it’s a challenge. I can’t go into great detail here, but it’s going really well. The city will give us the building if the financing is in order by December, and then in January, we can move ahead to the next step. It’s not just a matter of raising funds, but getting all the players together and working out how they’ll be involved. It’s a serious group effort.

LC: What state is the place in right now?
EE: The interior of the building is dilapidated — there’s almost nothing left inside. It’s a shame. It wasn’t even the fire that did the most damage. I’ve seen photos and a lot of the interior was intact after the fire, so I don’t know what happened.

LC: I heard that there was flooding in 2005.
EE: Yes, and a lot was lost in the flood. But it’s also a lack of maintenance. The space wasn’t heated for 20 years, for example. I visited the space just last week, and there were pieces of the ceiling that had fallen because of the humidity inside. We want to move quickly to save as much of the interior as we can.  I’m working with architects who have experience with revitalizing heritage sites, and I’m confident that they can preserve and restore the space.

LC: There are a bunch of cool old theatre spaces in this city, like the Snowdon. Why did you delve into reopening the Cinema V?
EE: I live in NDG — that’s the main reason. I’ve worked in cinema for a long time and I’ve seen the success of Cinéma Beaubien, and I think that success can be reproduced in the West End. And the building is so beautiful. The Snowdon is nice, too, but it’s poorly situated and not as big. We’re planning on building four theatres inside [Cinema NDG].

LC: I remember going to the Cinema V as a kid, when it was a repertory theatre, and later when it was a Famous Players theatre. It’s unbelievable to me that such prime real estate has been empty for so long.
EE: I really hope that we’ll achieve our goal of reviving this theatre because it’s so important for the neighbourhood. The area, that part of Sherbrooke in particular, is so vibrant right now; there are a lot of young families and new businesses and culture. We just want to contribute and be a part of that. ■

Films will be projected on (not in) Cinema NDG tomorrow night. Read about that event here.

See some of the history of 5560 Sherbrooke Street here:

To read the latest on Montreal news, please visit the News section.