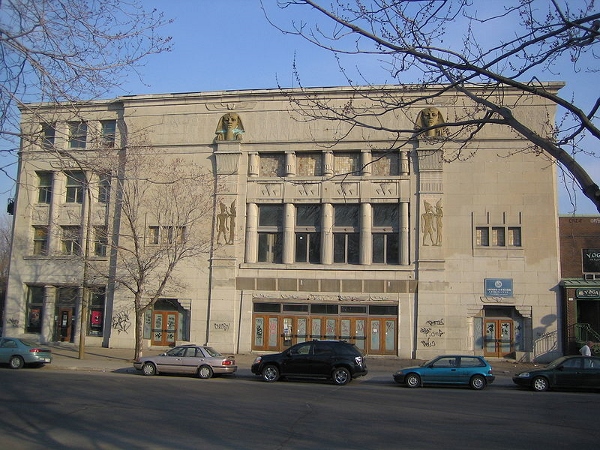 Contentious plans for the long-abandoned Empress Theatre on Sherbrooke St. in NDG spurred activists and Projet Montréal borough councillor Peter McQueen dance to the Bangles on the sidewalk yesterday.

The group, Friends of the Empress, is a proponent of a development plan for the art-deco theatre — which first opened its doors in 1927 — that was recently rejected by city council.

They say the borough decision to go ahead with a proposal from Cinéma NDG puts commercial interests ahead of local culture.

“I think the contest pitted people against each other,” McQueen said, though he admits he voted to hold a bidding process for non-profit groups to redevelop the roughly 8,000-square-foot theatre.

He now calls that a mistake, and says that all interested groups should collaborate to develop the space in a way that responds to local community interests. He said since neither of the two non-profit bidders had their financing in order — an original condition for bidding on the space — it was possible for the borough to begin a new process.

“The citizens should run NDG,” he said, “not [Mayor Michael] Applebaum.”

The Cinéma NDG plan reportedly includes a Caisse Desjardins as a tenant to occupy one part of the building, four screens to show foreign and domestic films on an upper floor and retail and restaurant space on the first floor.

The Empress Cultural Centre’s rejected proposal includes a multi-purpose performance space, a green roof, artist studios, a locally sourced restaurant and bar and a one-of-a-kind analog theatre. The ECC, however, occupied the City of Montreal-owned theatre for more than a decade before the borough gave it the boot last summer.

“We hadn’t come up with the money,” explained Jason Hughes, who joined the ECC board in 2010. He says the board and Applebaum resolved to create a viable development plan in six months. He said while they had an architect and developers donating services on a development plan, along with extensive community input, finding financing was difficult because it was unclear what the ownership structure of the building would be.

Hughes, like McQueen, says the bidding process was inappropriate for non-profits with limited resources. He said all interested groups should be working together to meet NDG’s cultural needs, such as offering live performance space. “Let’s dream a little,” he said.

Sonya Girard of NDG’s Action Communiterre donned an Egyptian-themed costume and danced to “Walk like an Egyptian” on Monday, a nod to the Empress’s Egyptian motifs. She said she liked the ECC’s plan for a locally sourced restaurant and green roof, and that it was time for local government to act on proposed solutions to support urban agriculture. She said all concerned parties needed to work together toward a solution for the building. “We’re more about cooperation than competition,” she said. “That’s the NDG we want.”

John Zavradinos, who has lived near the Empress since 1998, watched the sidewalk spectacle and said he’s seen little done with the building over the years. “They should do something about it,” he said. His preference, he said, would be to have a live music venue in the building. “There’s not enough music venues around here.”

The NDG council agenda for Sept. 5 includes plans to sign an agreement at the end of 2012 with Cinéma NDG that would see the project completed by the end of 2013. For the rest of this year, the agenda suggests, the group can secure its financing.

Cinéma NDG did not respond to a request for an interview. ■

Correction: A previous version of this story stated that the Empress Cultural Centre’s board signed a letter of intent with the City of Montreal to create a development plan for the Empress Theatre. In fact, the group reached an agreement with NDG Mayor Michael Applebaum to do the same.