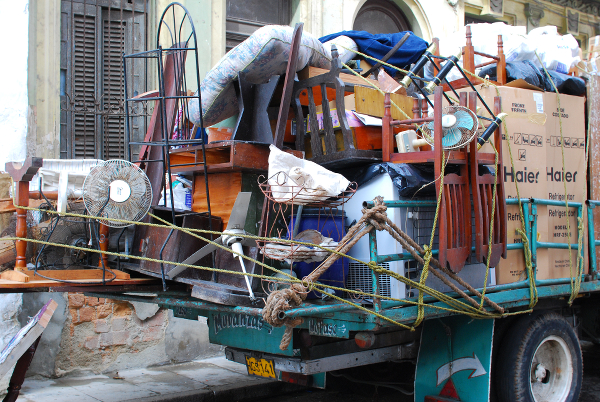 This activity does not prevent anyone from celebrating Canada Day. Photo via Flickr

Apparently, the fact that so many Quebecers move on the July 1 weekend is part of a plot to keep us from celebrating Canada Day.

A 12-minute YouTube video says that the event “is celebrated in all corners of this great country. But, in the province of Quebec, this great day of celebration was relabelled and designated as ‘Official Moving Day’ or ‘Sign a New Lease Day.’ ”

The fact that the rules governing the expiration of leases date back to at least 1750 — more than a century before Canada was born — should put a damper on that particular conspiracy theory. The regulation was intended to protect tenant farmers from being evicted before the snow had melted and was enshrined in the Civil Code in 1866. Again, Canada was just a twinkle in the Fathers of Confederation’s eyes at the time.

The lease renewal date was later changed from May 1 to July 1 in 1973 to accommodate students so that they didn’t have to move in the middle of final exams.

Ah ha! The Parti Québécois and the red square students once more conspiring to force society to pay…

Um, wait, was that 1973? Hold on while I Google this. Oops, that was under Liberal premier Robert Bourassa. Three years before the first PQ government was elected.

The video is full of this kind of crap, ascribing everything from the Olympic performance of francophones to the (temporary) “removal” of the Canadian flag from the National Assembly as part of the “Frenchification” of Canada.

It even alleges that “there are over 200 groups and sub-groups… whose mandate it is to turn English-speaking Canadians outside Quebec into French-speaking citizens.”

The anonymous creator of the video provides a peek into the deranged heads of people whose attitudes toward French-speaking Canadians are motivated by pure and simple racism. In their minds, any excuse to attack “Quebec” (code for francophones) is a good one, even if you have to make up the facts to justify it.

The latest fiction involves a plastic yogurt spoon that the U.S.-based Menchie’s chain had supposedly been ordered by the  Office québécois de la langue française to replace at a cost of untold gazillions for a new spoon mold. Actually, all that the OQLF had done was open a file after someone made a complaint, which the law requires they do. No decision had been made, no orders given, no requirement that the unilingual spoon be shelved. But that didn’t stop some media from reporting fairy tales as fact without making any efforts to verify the story.

And then there’s “Pastagate,” which refers to a decision by the OQLF (which was created by the Liberals) — after an inspection of the Buonanotte restaurant (while the Liberals were in power) — to send a letter to the owners telling them to change the Italian terms “pasta,” “antipasti” and “calamari” to French on their menus.

The recently elected PQ government’s reaction was a) to label the decision “overzealous,” b) promise to eradicate “irritants” in the law, and c) push the (Liberal-appointed) head of the OQLF to resign.

Yet the egg noodles have been flung only at the PQ, not the Liberal policies and personnel that created Pastagate.

Honestly, Pauline Marois could lead the Canadiens to the Stanley Cup in 2014 and anti-Quebec activists would condemn her for the 20-year drought that preceded it.

Frankly, the level of debate on many of these anti-Marois/PQ websites and Facebook pages is an embarrassment. I see cartoons and doctored photos that are the intellectual equivalent of fart jokes. Even anglo media activists like CJAD’s Dan Delmar — the guy who broke the Pastagate story — had to rein in a commenter the other day who wrote that what is happening to anglophones in Quebec is another “Holocaust.”

Holocaust, ethnic cleansing, fascism… and these nutbars wonder why only other fanatics take them seriously. They trivialize true suffering and genocide inflicted on populations around the world; they dare to compare a democratically elected government to a fascist dictatorship; they moan about the size of English on signs while nearly half of Canadians have less than the minimum level of literacy required to function well at work and in daily living.

And then there are those who claim to be so upset that they must flee Quebec “oppression.” Just leave, I say, and spare us your whinging.

People like Harley Kesselman, who fled to the States and then returned to get a cheap MBA in Quebec and is now fleeing back to the States because he doesn’t want to pay taxes here. In two letters to the Gazette, he reveals himself to be a self-absorbed twit. Good riddance.

Even the recent groundswell of indignation over the “turbangate” incident rings hollow when some of the loudest condemnation of Quebec seems to come from people who have overtly racist attitudes about French Quebecers. In my experience, bigots are usually equal opportunity discriminators, so it wouldn’t surprise me if they also opposed turbans in the RCMP back in 1980s.

So this week, as usual, my loyalties are divided. I am, as the beer ad says, a Canadian. I am also québécois. I am proud to be both, but that doesn’t mean I’m not embarrassed to have Stephen Harper as prime minister or Pauline Marois as premier.

If hatred and prejudice are the hallmarks of the new Canada or the new Quebec, I want none of it.

I have zero tolerance for intolerance regardless of who propagates it or who it’s aimed at. So my “moving week” wish is simple: let’s stop believing our own bullshit and instead build a future together with compassion, understanding and trust.

Correction: A previous version of this story referred to a 22-year Stanley Cup drought for the Montreal Canadiens. The Habs last won the Cup 20 years ago, in 1993.