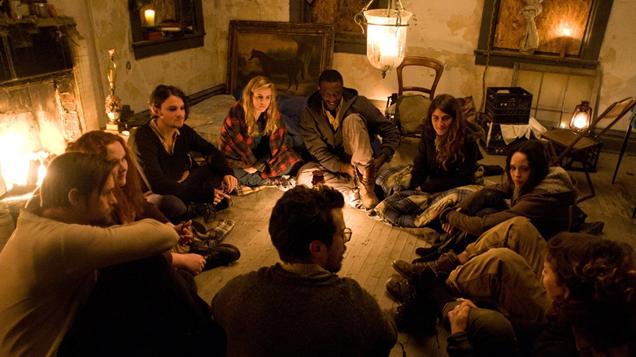 The East, co-written by Zal Batmanglij and Brit Marling, whose previous collaboration Sound of My Voice also dealt with themes of persuasion and cult camaraderie, have elaborated on these ideas to create an ostensibly taut and morally ambiguous thriller tackling those same issues of corporate compliance versus everyday moral righteousness. Batmanglij and Marling, who purportedly embedded themselves into a group of freewheeling activist freegans for several months before writing this film, have certainly tapped into a very real movement for change, echoing the sentiments of millions of people involved in such movements as Occupy, Idle No More and the various international “Springs.” However, for all that they get right, there’s plenty of things that they get wrong.

Marling plays Sarah Moss, a former FBI agent now working for a private intelligence firm. They manage to infiltrate an anarchist cell known only as “The East,” living off the grid in a dilapidated rural mansion (yes, that’s right) somewhere on the Eastern seaboard of the United States. After convincing them of her authenticity, she quickly finds herself a reluctant participant in their anti-corporate terrorist plots, or “jams” as her cohorts have dubbed them. She begins with an operation to give big pharma executives a dose of their own immunization medicine that has netted them billions but is documented to produce degenerative, life-threatening side-effects in all patients after only one dose. Of course, this is a fiction film, but it’s this type of implausibility that prevents The East from transcending the confines of Hollywood’s formulaic, exaggerated premises into less dramatic territory that would ring truer and have more of an impact on open-minded viewers.

Batmanglij and Marling also make the mistake of giving their characters too much histrionic backstory, beginning with the premise that all their militant agitators come from wealthy backgrounds and thus have a personal connection to the executive class of criminals they target. In a misguided attempt to use the equalizing power of emotional engagement to draw in viewers who would otherwise be alienated by the radical actions of The East’s protagonists, the filmmakers confuse the personal with the political — which ironically has a distancing effect on the audience, by making it all too easy to write off these causes as little more than simple retribution for personal losses and grief.

Still, Batmanglij and Marling get a little closer to greatness with each new collaboration. If they’re not quite there yet, The East is certainly a promising step towards it. ■