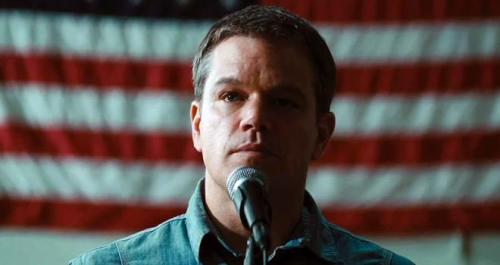 Anyone familiar with Gus Van Sant’s filmography would likely agree that his films can be divided into two categories: the daring, artistic and innovative (Gerry, Elephant, Paranoid Park), and the crowd-pleasing, saccharine, heavy-handed and boringly formulaic (Good Will Hunting and, more egregiously, Finding Forrester). The disparity in tone and artistry between the two camps is confounding, but thankfully offset by the infrequency with which Van Sant strays into the second category.

Unfortunately, fans of his “good” work will likely be disappointed (but possibly not surprised) by his latest offering, Promised Land. After all, 12 years on from Finding Forrester, he was due for another stinker.

A cringingly earnest attempt at a contemporary “social problem film,” Promised Land’s plot centres around a fictional middle-American town’s struggle with the pros and cons of selling its heritage farmland to a natural gas company (repped by the hard-working, exhaustingly well-intentioned Matt Damon) looking to exploit the hidden riches of an underground cash cow. The worldwide economic crash has taken a heavy toll on the rural community, and the promise of much-needed cash initially seems like a godsend, especially when its rewards are sold by Damon, an everyman who understands the hardships and necessities of today’s cold, hard economic reality.

Enter John Krasinski, the dedicated traveling suave modern-day hippie, who arrives on the scene with cautionary tales warning of the environmental perils of natural gas extraction (fans of Battlestar Gallactica should invent a drinking game for every time the word “fracking” is uttered). His attempts at ingratiating himself to the good townspeople (heading down to the local watering hole on karaoke night and launching into a stirring rendition of — you guessed it — a Bruce Springsteen classic) work like a charm, especially with the local schoolteacher (Rosemarie DeWitt), a prodigal daughter who has returned to her late father’s pastoral homestead from “the big city” after an epiphany about “what really matters.” For dramatic effect, as you may have surmised, this triggers a totally unnecessary love triangle subplot. Yawn.

What is a surprise, however, is that the film was penned by both Damon and Krasinski, from a story by Dave Eggers (oh, Dave, where did you go wrong?). There is something inherently repugnant about do-gooder multi-millionaires tying a social cause in with something intended to profit both them and their backers, as well as increase their public profiles. But even if you can manage to see past that, Promised Land is one of those contemptibly vapid projects which purports to tackle the “big issues” but which ultimately have nothing to say at all. Aside from occasionally bandying about the word “fracking” in the most superficial sense, the true, sinister nature of natural gas drilling is hardly touched on, and neither is the real conflict of the film ever really explored (a devastated community’s desperate need for an influx of cash, at any cost); instead, both sides of the debate are forced to hide behind the melodrama of the subplots.

There is only one profound moment in the entire film. After a frustrating day being confronted by farmers having second thoughts about signing over the deeds to their land, Damon finds himself drowning his sorrows at the aforementioned watering hole. He’s approached by a disgruntled farmer, and after suffering a barrage of insults, he retorts, in exasperation, that unless we all agree to stop our gross need for consumption, the struggle between companies like his and the people who enable them will never end. And there it was: the crux of the matter, glossed over as smoothly as the faces of the film’s actors, caked with make-up. ■