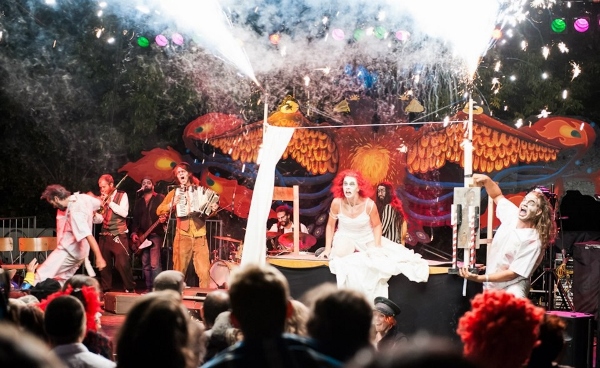 Undead newborn babies, a torch-wielding mob, plenty of gore and accordions, all inside an abandoned swimming pool — that about sums up what you can expect at tomorrow’s performance of rock opera A Surgeon’s Lament.

Spawned from the fucked-up imagination of Santosh Lalonde, also known as the frontman of local gypsies Bad Uncle and the Unsettlers, A Surgeon’s Lament is a melding of music, circus, burlesque and theatrics. It began in Montreal’s bars as an experiment, and is now a full-fledged opus funded by the Canadian Council of the Arts.

Tomorrow night’s performance of the 30-minute rock opera also doubles as the launch of Bad Uncle’s album of the same name. I caught up with Lalonde ahead of the show.

Tracey Lindeman: How long have you been working on A Surgeon’s Lament?

Santosh Lalonde: It’s been a work in progress for about two years, with big breaks in between. We sort of worked on it in binges for a year until the music was ready. Then, whenever there was a performance, we would work on it in binges once again, with the circus element, until it was ready.

TL: The plot is about a surgeon who returns from the grave and creates his ideal mate — kind of Frankenstein-y. But who are these horrible creatures born of their union, and how do they instigate a war between the living and dead?

SL: The horrible creatures are actually a swarm of undead newborn babies. They end up escaping from the hospital and swarming into a nearby village, like a biblical plague of locusts. The villagers are understandably angry, not only because the babies are a blasphemy against the sanctity of life, but they are eating crops, cables and household pets.

TL: Where’d the idea come from? Who came up with it, and how did it get fleshed out?

SL: It started as a song that I wrote for my one-man band act. It felt strangely unfinished, so I just kept on tacking extra parts onto it until it was a good 15 minutes long.

I drink a lot, and at one performance at Grumpy’s, I found myself forgetting lines, so I started improvising and found the second half of the song by mistake. Another session at Barfly furnished me with another 15 or so minutes. The full song is about an hour long now, but because of time restrictions, we’ve cut it down to just the good parts.

When Bad Uncle was touring through Chicoutimi, we met Isabelle Campbell and Elise Legrand. Both of them have a lot of experience in circus, and Elise was working with her troupe, Labokracboom, on a project that was eerily similar to the opera, so we decided to join forces. All of the circus elements come from the twisted minds of Isa and Labokracboom.

TL: How do the music and the theatrics work together?

SL: Although it did start as a purely musical affair, when we decided to mix in the circus element, we found that we had to change the song in many ways to give enough space for the circus performers to help tell the story. The narrative moved forward a bit too quickly in the music version, so we added instrumental parts, extended verses and added some silences that weren’t there before. We didn’t want the circus to serve the music, and we didn’t want the music to serve the circus. We’ve tried, at every step, to make it a marriage between the two mediums.

TL: Tell me about the setting, costumes, props.

SL: We created a set and other lovely things — it’s still modest, but functional. There are costumes, make-up, a hospital bed and many other little embellishments.

The set and the act has changed each time we performed it. Once at Festival du Folk Sale, we had the surgeon’s wife suspended over a bonfire by a crane, shooting fireworks out of her hands. Another time at Festival Carmagnole, we had an entire mob of angry, torch-wielding villagers, complete with a full brass band, pushing their way through the crowd. Because we are doing this performance indoors, there are some more restrictions, but we’re going to try to pull out all the stops.

TL: So you’ve performed it before. What’s special about tomorrow’s show?

SL: It’s been sort of peeking its head out for the last year. About this time last year, we did a 15-minute version of it at Bain Mathieu for les Maîtres du Feu. This one will be special because it’s the first time we show it here in Montreal, and also because it’s the launch of the Bad Uncle album, and because we’ve put a little bit of effort into making it bigger and better.

TL: What are some of the circus components you’re most excited about?

SL: I love torch-wielding mobs. There’s also some pretty cool choreography lined up for the wedding scene. We are also looking at blood explosions for the natal scene. Gore is good. I wanted to spray the crowd with blood, but more sober-minded people have informed me that this is a bad idea. Really, it’s just great to work with Labokracboom, Isa and all the other performers. The entire thing is what I’m most excited about. ■