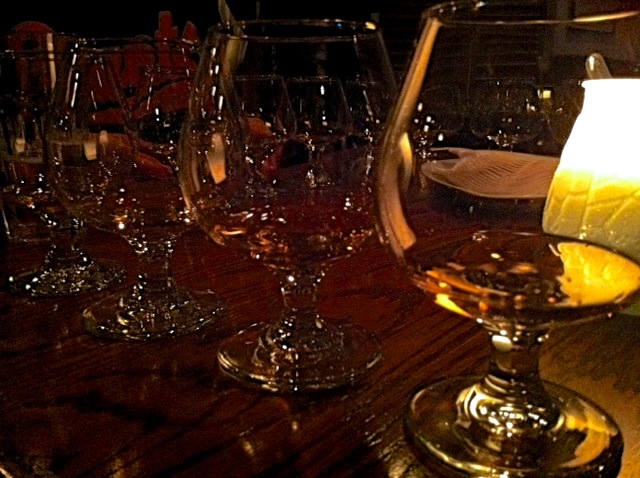 First of all, I spell whiskey with an E. I don’t know when and where the E dropped out from some spellings of the word. Maybe it’s a Commonwealth thing, but there are just some elements of Canadian spelling I refuse to get behind.

Then there’s scotch, bourbon, rye, and single malt whiskey, blended whiskey — the list goes on. It seems this delicious and intoxicating elixir is the subject of a number of debates, not the least of which is what the hell it’s even called.

And so people like Brian McQueenie come in handy every now and then. The whiskey expert of the Montreal whiskey-tasting event-organizing Ouidram walked us through five whiskies at Burgundy Lion last week to debut what the bar’s owners think is the largest such collection in North America.

Montreal is behind the times when it comes to whiskey — and that has a lot to do with the SAQ’s rules on imports, Burgundy Lion owner Toby Lyle told me when I arrived.

A recent trip to a Toronto LCBO yielded the same conclusion; its whiskey aisle was gilded in liquid gold, with a selection of American-made bourbon that would make (Quebec-born) men weep.

And so amassing a collection of a reported 250 scotch whiskies and another 100 or so whiskies from around the world is no small feat. It all started about five years ago, with 45 bottles, Lyle says.

The bar’s massive collection mirrors an 11-year trend happening in North America. Normally, explains McQueenie, there are peaks and valleys every eight years in the liquor’s popularity, but it has steadily risen for over a decade at this point. Even so, he says, there are only three or four good whiskey bars in town.

With five snifter glasses laid out in front of us, and fancy (and delicious) appetizers making the rounds, me and my whiskey-drinking companion sampled Irish and Scottish whiskies and American bourbons.

This must be what it’s like to have actual money, I thought to myself as I snacked on mini lobster rolls and chorizo-laced bruschetta.

Look, I’m no whiskey-drinking savant. A lot of things were said and McQueenie was more than knowledgeable about the subject matter — something about monks and how whiskey is distilled beer — but his mic was drowned out by the hockey game and barroom chatter from the first floor below. That said, the whiskies were great, even if my palate isn’t entirely accustomed to the overwhelming taste of pure alcohol (no matter how beautifully golden it is). If anything, it gives me a goal to work toward, because drinking whiskey in dimly-lit establishments is a thing people should do. As the song goes, show me the way to the next whiskey bar.