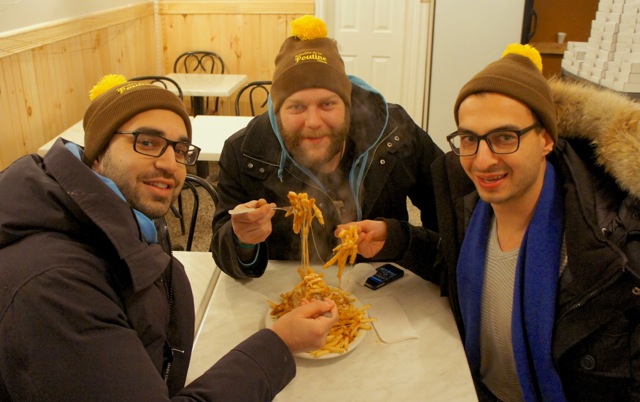 Surely you’ve heard of Poutine Week MTL by now — it’s made the rounds on nearly every single blog and publication in town. So we’ll just give you the basics: Modeled after this past fall’s first edition of Burger Week MTL (which, like Poutine Week, was organized by Na’eem Adam, Thierry Rassam and Jason Mainella), Poutine Week (Feb. 1–7) has 30 participating restaurants making special poutines for $10, with many of them making a $5 sample size. You’re gonna eat porchetta, foie gras and maybe even some flowers in your poutine this week, and it’s gonna be weird and probably delicious.

(Also, a scoop on the next marathon of gluttony: Cocktail Week MTL is coming this summer.)

Anyway, we asked a panel of esteemed local celebs about their favourite poutines and best poutine-related memories. Check out what they had to say below.

Cadence Weapon, hip hop artist
My favourite poutine place is la Banquise, where I usually get la BOM (bacon, onion, merguez sausage). I usually like meat in my poutine, and this is a good combination — it’s the bomb. La Banquise has a great assortment of poutine, and they’re open 24 hours a day. Can’t front on that. La Banquise, 994 Rachel E.

Abeille Gélinas, DJ and TV host
I really like the Rachel poutine from la Banquise. With all the green peppers, mushrooms and onions, I almost feel healthy eating it! It’s special for me because it’s where I had my first meal with my fiancé, at 2 a.m. with some friends. Eyes for each other and a belly full of poutine!

Vilify, DJ
I think the Rachel from la Banquise — green peppers, mushrooms and onions with vegetarian gravy. La Banquise is a Montreal staple for poutine. I always feel I have to give visiting DJs and friends the real deal by bringing them here, and, as it’s 24 hours, there’s always time. I’m happy la Banquise makes poutine accessible for non-meat eaters, and the Rachel is my favourite because even with fast food, I like to get my veggies in there, too.

Memories of poutines past

Tracy Little, Olympic synchronized swimmer
My favourite poutine when I was a kid was a simple chicken poutine with gravy at Rôtisserie Gicanu, the one in Marché de L’ouest in DDO. The chicken was finely sliced and oh-so-delicious. I enjoyed it best way back in my beginning childhood synchro training days, when I was only 12 years old; people then didn’t experiment much with poutine. I would have time in between class and practice, and enjoyed chowing down on a healthy taste of heaven — maybe it helped me become a better athlete, having those extra pounds of grease weighing me down. Rôtisserie Gicanu, 11600 de Salaberry, DDO

Yung Chang, film director
The best poutine I ever had was in a family-run diner near Mastigouche. In Montreal, Decarie Hot Dog! Worst poutine I had was at the Minnesota State Fair. (Minnesotans are big on cheese curds, you see, so they’ve tried to make poutine to no avail). Decarie Hot Dog, 953 Decarie, Ville St-Laurent

Bilal Butt, radio host of CHOM’s “Afternoon Rock Ride”
It’s 3:30 a.m. and I’m stumbling out of a downtown pub after 3.5 hours of gigging with my band, craving that gratifying fix of the perfect poutine. I wander into Dépanneur Nouveau Forum for a pack of gum and bump into a line-up of wasted American tourists ordering slices of dried-out pizza and poutine. Poutine from a dep? As a proud Montrealer, I feel an immediate obligation to point them toward one of the city’s many famous late night eateries when one of them yells out, “Dude, this is the best poo-teen I have ever eaten! The gravy is so good.”

The menu features 15 variations of the original Quebec favourite, including the Forum Special (pepperoni, bacon, smoked meat, fried onions and mushrooms), Gyro, Mexican and the typical hot chicken sandwich-style Galvaude. The guy behind the counter, Mario, assures me in a thick Québécois accent that this is the best poutine sauce I’ll ever taste — and he’s right! His copilot Shuvo Khan says only one man knows what’s really in there. As legend has it, Bangladeshi dep owner Jahir-Ul-Islam spent his first years in Montreal in the kitchen of a greasy spoon learning everything he knows about making the ultimate poutine from an old Québécoise woman who imparted to him her secret recipe for the sauce.

My medium smoked meat poutine is assembled with a layer of chopped curds, fries, an extra mountain of curds, a layer of sauce, a pile of chopped and sautéed smoked meat (from Dunn’s) and another layer of sauce. I head up the stairs past the bathrooms to the severely overheated cafeteria-like dining area and savour the salty goodness of a product that rivals la Banquise and the Montreal Pool Room. Most people would be hard-pressed to trust a beer, wine and lotto pusher to produce a worthy poutine, but to some (like myself), Nouveau Forum earns its self-proclaimed title as the home of the best poutine in Montreal. Dépanneur Nouveau Forum, 1250 Crescent

DeAnne Smith, comedian
As a person with vegan tendencies, I haven’t had much experience with poutine. The few experiences I did have, though, were amazing. (Note: one could replace “vegan” with “lesbian” and “poutine” with “men” in the above sentence, and the sentiment would remain true.)

Generally, I dabbled in poutine when it was late and I was drunk. (For the record, the poutine/men analogy is still holding up.) The first time I ever tried poutine, it felt thrilling and elicit. (Hey, this is getting uncanny.) I stumbled into Chez Claudette on a frosty winter night, feeling strangely guilty as I dug into a steaming dish of crispy fries, squeaky cheese curds and real, homemade, peppered-to-perfection gravy. God damn, it was delicious. I finally understood what all the poutine-eaters had been raving about. I mean, what’s better than a sticky, hot burst of poutine in your mouth on a cold winter night? (Um…)

As delicious as it was, though, I knew in my heart that the path of poutine was not the path that I would walk in this lifetime. Sure, I’ve tried poutine a few more times since then, just to make sure I’m not missing out on anything. For now, though, I’m pretty happy eating vegan chili and banging chicks. I still think of poutine fondly, from time to time, and who knows, I may get into it again in the future. In the meantime, I celebrate those of you living the poutine lifestyle. Don’t be ashamed. There’s nothing wrong with it. Chez Claudette, 351 Laurier E. ■