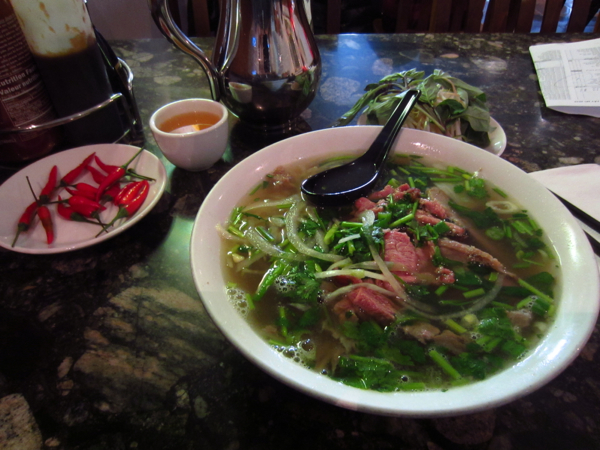 Vietnamese pho, aka soupe tonkinoise, is among the most ubiquitous cheap ethnic eats in Montreal, rivalled perhaps only by Lebanese shish taouk in terms of the number of restaurants that serve it and the breadth of their geographic distribution. Its presence on the scene is longstanding: it became a choice food for boozed-up students back in the late ‘60s and early ‘70s. In this regard, it predates poutine’s omnipresence by at least a decade — Quebec’s so-called national dish was hardly known in Montreal at the time, as a friend’s father pointed out to me recently.

Pho’s perhaps not as fashionable as Japanese ramen, the current fad-du-jour in the world of soup and noodles. Still, judging by how full the city’s numerous pho houses can be at lunch and dinner hours, its popularity with Montrealers appears to be enduring.

Despite its ubiquity, somehow I have only eaten pho exactly twice in nearly 15 years of life in Montreal. There is no particular reason for this; I certainly have no objection to Vietnamese food in general, or to pho in particular. Aware of this gap in my local culinary knowledge, it was with great interest that I took on the present assignment.

Given how numerous the pho houses are, doing a round-up of the best ones is a daunting task — ever more so when one is a relative neo-pho-yte, if I may be so bold. In order to come up with a manageable list of places to try, I made a very rare productive use of social media, calling out to friends and followers for suggestions. A deluge of divergent, highly opinionated replies followed.

A number of respondents provided a link to a recent post on a local food blog whose author, along with another industrious blogger, visited no fewer than 35 pho houses to identify a top three. I didn’t have the time, the money or, for that matter, the motivation to try as many. Instead, I looked at which places came up the most in the suggestions I received and chose five to investigate.

For the sake of comparing apples to apples, I ordered exactly the same thing at each establishment: the classic pho tai nam, or beef broth with rare eye of round and well-done flank.

All but one of the restaurants — Pho Bac in Chinatown — were worth trying, for a variety of reasons. See below for more details.

Pho Bac (Chinatown)
1016 St-Laurent
(514) 393-8116
Though Pho Bac came up several times in people’s suggestions, it was markedly worse than the other four establishment I visited. The lesser quality of this pho was announced immediately upon its arrival at our table by the unpleasant, old cow odour it emitted. The broth had a lacklustre taste and it was low on perfume, the star anise and other spices being comparatively subdued. The beef, specifically the well-done flank, had an off taste and was likely the source of the nostril-aggressing odour. The noodles were a bit soft.

It didn’t help that Pho Bac’s locale is barren and somewhat dark, and at $9 a bowl with no size options available, it was also among the most expensive of the five soups I tried. I suspect its popularity is purely a function of its location in the heart of Chinatown. For those who recommended this place: you have failed me for the last time.

Dong Que (Rosemont)
1210 Rosemont
(514) 490-0770
Dong Que would seem to offer a pretty solid bowl of pho. The broth had a bright flavour, but was not as richly perfumed as those at Nguyen Phi and Pho Lien — some people may prefer this greater degree of subtlety. While the aromatic spices were used with restraint, the fresh cilantro that topped the soup was not. None of the other phos had even half as much as this one. I didn’t mind; I like the fresh flavour of this herb, but I know that not everyone does. The beef was fresh and thinly sliced, the rare pieces being indeed rare. The noodles were a touch on the soft side.

Don Que tends not to be as frantically busy as some of the other pho houses, especially those downtown and in Côte-des-Neiges. This gives it a rather quiet and cozy atmosphere. Eating pho in such peaceful environs at the end of a long workday was therapeutic. At $8.50 for a large soup, the price was mid-range.


Pho Tay Ho (Rosemont)
6414 Rue St-Denis
(514) 273-5627
The pho here had perhaps the most appealing appearance of the lot. The broth was clear and without a spot of grease. Unfortunately, the taste didn’t match the appearance. It was a bit stodgy — all beef and vegetable, very little star anise and other spice to brighten it up. Another problem was the beef — both the rare eye of round and the well-done flank were sliced a bit thick.

Pho Tay Ho is the classiest of the five restaurants I visited, with a clean, spacious and well-appointed dining room. The greenhouse-like dining area at the back of the restaurant is especially pleasant during the daytime. It seems, however, that one must pay a bit more to enjoy such pleasant environs—a large pho tai nam goes for $10.

Despite its name, which would lead one to believe it specializes in pho, Pho Tay Ho actually does a much better job with other Vietnamese specialties, in my experience. It’s very much worth trying, just not necessarily for the pho.

Nguyen Phi (Côte-des-Neiges)
6260 Côte-des-Neiges
(514) 344-1863
The aforementioned industrious bloggers pointed to Nguyen Phi as the best of the 35 places they tried. Indeed, it was very good, without question rivalling Pho Lien, my personal favourite of the bunch. The broth was aromatic and well-balanced, topped with a measured amount of white onion, green onion and cilantro. The beef smelled and tasted fresh, was thinly sliced, and was present in decent quantity. The eye of round could have been a bit more rare for my taste, however. I think it may have sat in the hot broth a few minutes before being delivered to us. The noodles were perfectly al dente. The toppings plate included, in addition to the Thai basil and bean sprouts, a few Thai red chillies, which provide a much nicer way of spicing things up than the usual not-so-subtle Sriracha hot sauce.

Nguyen Phi’s locale, though not as fancy as Pho Tay Ho’s, was rather pleasant — clean, fresh-smelling and amply fenestrated, if sparsely decorated. At only $6.95 for a large bowl, it was the cheapest of the phos I tried.

I should mention that before my bowl of soup, I enjoyed an excellent shredded papaya and dried beef salad. This salad alone is a good reason to check out Nguyen Phi.

Pho Lien (Côte-des-Neiges)
5703 Côte-des-Neiges
(514) 735-6949
Pho Lien was pho-sure my favourite of the bunch. Though a touch greasy, the broth here was sweeter and had the richest perfume of the lot. The soup was further set apart by the meat, which was fresh and slightly more copious than elsewhere. It’s worth noting that, unlike at the other four places, Pho Lien offers brisket in addition to the usual eye of round and flank. The inclusion of this rich tasting, fatty cut of beef adds further depth to the flavour of the pho. The rice noodles, like at Nguyen Phi, were bang on al dente.

Pho Lien’s second floor locale, though also well-fenestrated, is largely free of charm. It feels a bit cramped, in part because it tends to be very busy. At $8.50 for a large bowl, it’s in the middle of the price range. ■