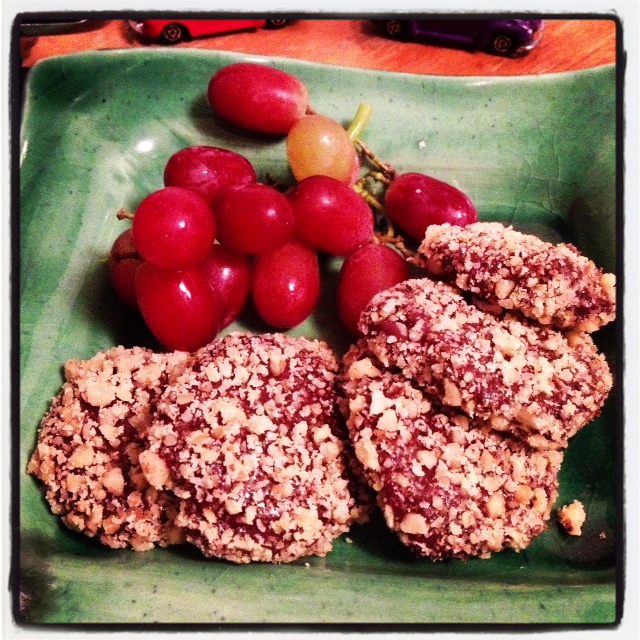 Brigadeiro is made of dulce de leche, cocoa, butter and nuts. What’s not to love?
Photos by Stacey DeWolfe

As a person with a significant sweet tooth who is too lazy to bake, I try to keep the house stocked with dark chocolate so that my late-night (or evening… or afternoon) cravings don’t go unsated. Still, I cannot tell you the number of times I have stood in front of the fridge, trying to will a cookie or a morsel of sweetness into being. And so, as I mentioned a few weeks ago in my post about chocolate macaroons, I like to keep the pantry stocked with some key items: the aforementioned coconut and cocoa powder, and to my surprise while rummaging around in there, a can or two of sweetened condensed milk.

It was another student at the Proustian potluck who provided the recipe for this week’s treat, though it has been a few years now that I have been experimenting with this mysteriously thick and sticky goop. As the name implies, sweetened condensed milk is milk that has gone through a process of evaporation and then is sweetened with sugar. It has about 60 per cent less water than regular milk and, like its unsweetened cousin, evaporated milk, was popular in the days before refrigeration because of its long shelf life.

I remember that my grandma always had an open can of sweetened condensed milk in the fridge — like many women of her generation, she’s always been loathe to throw anything out, even when it is clearly past its expiry date. When I asked her what she generally did with it, she could not recall, but I suspect it was used primarily to sweeten both coffee and the puddings and pies that we consumed at our Sunday family dinners in the ‘70s.

I too am loathe to waste food, so when I open up a can, I know that I am committing to a week or so of decadent treats, including iced Vietnamese coffee (glass of ice with heaping spoonful of the milk and strong coffee poured over top), simple pudding (one spoonful of milk for each cup of plain yogurt, with lemon and orange zest stirred in and fresh fruit on top) or frozen simple pudding (the above, spooned into bowls and frozen for two to three hours).

You can also make dulce de leche, which I absolutely adore but for some reason have never made. No, wait — I know darn well what the reason is: you have to simmer the can of milk in water for three hours, which requires patience and/or forethought (two qualities that I am not really in possession of). Oh, and a warning from chef Michael Smith to any who might set out on this adventure: you have to keep the can fully submerged while it simmers, otherwise you risk a messy (and dangerous) explosion.

For me, the most delightful option is the one I learned about last week, a delicious Brazilian bonbon called brigadeiro. This, too, is incredibly easy to make, but takes significantly less time. All you do is put one tablespoon of butter into a saucepan over medium-low heat and let it melt, then stir in three or four tablespoons of cocoa powder (most recipes call for three tablespoons of cocoa, but I think four provides a better balance). Add an entire can of sweetened condensed milk and stir constantly while cooking to prevent burning. It only takes about ten minutes to thicken, so it isn’t too much of a time commitment.

When you’re done cooking the milk, put it aside for as long as it takes to fully cool, then do what you will with it (the student who brought the brigadeiro to class served it in little paper candy cups placed into a plastic egg container — a rather brilliant transportation device). You can also break from tradition, as I did, and roll the balls up in crushed nuts. I used walnuts because that’s what I had, but cashews, hazelnuts or almonds would work just as well.

The brigadeiro seemed to never fully firm up, so I placed the balls — which, as you can see in the picture, quickly became patties — into a tupperware container and put them in the freezer. When I pulled one out a few hours later, it was delectably chewy and chocolatey. Brigadeiro can also be eaten immediately by simply dolloping some onto dessert spoons or as a topping for ice cream.

I also made an accidental discovery when I took my brigadeiro-coated spoon and rolled it in the remaining nuts: if you happen to have some breadsticks standing by, roll them in the brigadeiro while it’s still warm, then in the crushed nuts, and you’ve got yourself homemade Pocky. ■