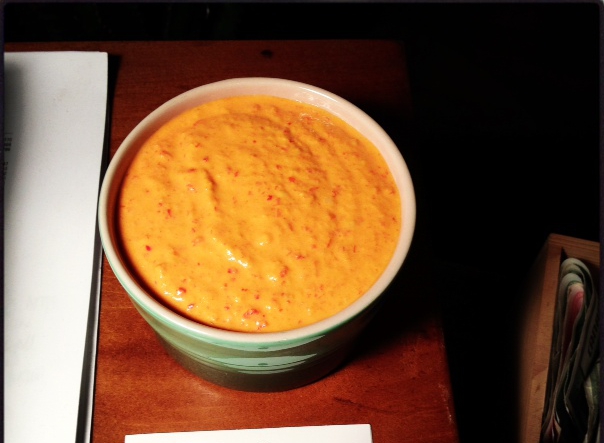 As a person who loves food, I am always looking for ways to incorporate eating activities into other non-food-related parts of my life. Take last week, for example, when my Memory and Literature course took a break from writing analytical paragraphs and instead participated in what you might call a Proustian potluck (named for Marcel Proust — he of the involuntary memories conjured by the taste of the tea-soaked madeleine).

To participate, students had to bring a food that, when eaten or smelled, evoked strong memories of their childhoods. In addition to the flavour-filled (and, dare I say, pedagogically sound) afternoon of fun that was had by all, I walked away with a few new discoveries that I will share with you. This week: Mazavaroo.

Mazavaroo! Just say it out loud a few times and imagine how delightful it must have been as a young child to roll that one around on the tongue — but even better than that are the complex sensations this Mauritian chili pepper-based staple brings to the palate: warm yet cool, fiery but somehow fresh.

I must confess that before meeting two lovely Mauritian students, Miss C and Miss S, this semester, I knew absolutely nothing aboutMauritius. Located off the Southeast coast of Madagascar — which itself is located off the Southeast coast of Mozambique — Mauritius is a culturally and linguistically diverse country (students learn English, French and Creole in addition to their mother tongues) with a local cuisine that reflects this diversity.

It was Miss S who brought the Mazavaroo to the potluck, though she later confessed that it was her father who was responsible for its creation. What struck me first was its absolutely brilliant hue, but what surprised me was its taste, which though familiar (it is, after all, a chili sauce) has a lightness that is hard to put a finger on — less citrusy than many Jamaican hot sauces, but with a degree of acidity that is not seen in Sriracha. When I asked her what she ate it with — in addition to the prawn crackers that we snacked on at the potluck — she smiled mischievously and said, “EVERYTHING.” (A few days later, when I saw her eating a Mazavaroo and Nutella sandwich, I realized that this was not an exaggeration).

To experience this delicious treat at home, you need only six ingredients: hot chilies, lemon, garlic, oil, vinegar and salt to taste. It was hard to get a recipe out of Mr. S, since each person’s Mazavaroo is as unique as its maker and one perfects the sauce by trial and taste, but for those of you who would like a starting point, here is a basic approach:

Start with a package of your favorite hot chili peppers (the sauce pictured here was made from Thai Bird’s Eyes; there are usually about 30 per package). De-stem and wash the chilies and place them in a blender with one to two cloves of chopped garlic, the juice of one lemon, three to four tablespoons of vinegar and about a half cup of oil. Blend until smooth, salt to taste, and bottle, but store for at least two days before consuming so the flavours meld. Many online recipes call for onions, but as Miss S pointed out, onions will cause the sauce to spoil faster, so it is better to leave them out.

This recipe makes two relatively small bottles that will last in the refrigerator for a couple of weeks. ■