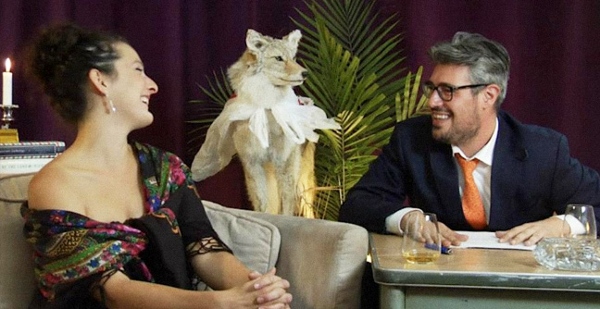 “St-Dominique Street was the only street where I was able to encounter reality,” Saul Bellow once wrote. He was describing Mile End’s chaotic babble of immigrants, peddlers and tuberculosis.

The area is not as downtrodden these days, but it still fascinates Dimitrios Koussioulas, a Bellow fan who is also the host and co-creator of Parc Avenue Tonight, a new web-based DIY talk show focused on Mile End and its characters.

“We have the best bums, a nice chunk of this city’s creative people, the most interesting entrepreneurs — and everyone’s hacking it out on this tough street that’s always under construction,” he says, explaining the show’s genesis.

“I have this apartment; it kind of feels like a TV studio, and I thought, ‘Why don’t we make a talk show for the neighbourhood?’”

Enlisting the help of friends Matus Racek and Natalie Vansier, Koussioulas borrowed cameras and shot close to 20 episodes of material in three weeks.

“We really didn’t know what we were going to achieve — if it was even going to be useable. We just did it,” he says.

Blessed with one of the finest heads of hair I’ve ever encountered (as though Leno and Conan mated), Koussioulas is a gregarious, enthusiastic “media sponge” who clearly loves language: he forms words like a wine lover savouring vintage Barolo. Having spent the last five years as an art dealer, he also knows how to sell, sprinkling in self-deprecation as needed.

“I don’t know how I became the host of this show. There was just nobody else! And I had all these great ties and suits from my art dealer job.

Initially, the trio planned on sticking to the traditional Johnny Carson-inspired  talk show format: monologue/intro, first guest, second guest and some kind of musical guest or “talent.” Producing for the web, though, freed them from traditional television’s constraints.

“It’s changing, and it will keep changing. We’re still figuring it out,” he says, adding that their expectations are modest. “If people like it, and they can put up with me, amazing, let’s do a second season, and let’s do a live audience. We can do it at Rialto!”

The group has released three episodes thus far (featuring filmmaker Matt Silver, Chef David McMillan and artist Kate Puxley), with new segments planned for each Thursday. And while Koussioulas is staying tight-lipped about upcoming guests, he promises an eclectic mix, including burlesque performers, musicians, entrepreneurs and local characters — anyone, essentially, who has a story to tell.

“I’ve always loved talking to people and asking questions. I love being surprised. I think conversation is an art, an art that is lacking now. People need to talk!” he says. ■