It’s practically what makes Montreal what it is, or rather, it’s what makes the trendy parts of Montreal so desirable, and the city and various tourism and business development agencies have been promoting the ostensibly convivial independent business environment for years. For two solid decades, Montreal’s urban renewal has been driven by a simple formula of comparatively inexpensive housing, comprehensive mass transit and walkable neighbourhoods well-stocked with small businesses.

The idea that we somehow do commerce differently is as central to Montrealers’ perception of our city as our apparent joie-de-vie, supposedly refined palettes and seemingly innate wokeness.

Part of this homegrown appreciation for the small-scale curated-consumption shared-experience is doubtless rooted in the ubiquity and culture of the dépanneur: when the most convenient place to get that random thing is steps away from your front door and run by someone who will take mental notes of what you buy to serve you better, you tend to return. Across much of the city, this principle has sustained business districts and commercial thoroughfares that anchor Montreal’s inner city neighbourhoods. No amount of parking or bike lanes will change what Montrealers crave: independent businesses where the person behind the counter has a vested interest in you, your satisfaction as a customer, and the viability of the immediate surroundings.

But when these businesses need help, the city and province are either ignorant of businesses’ needs or apathetic to their concerns.

Politicians have bemoaned the economic challenges caused by the pandemic and urged innovation as a means to correct for losses and deficits. The government has told us all how vitally important it is to support small businesses, especially — as mayor Plante recently pointed out — during our annual festival of rampant hibernal consumerism in tribute to the birth of a Bronze Age boy from Judea. But for all this cheap talk, when it comes to another anachronism — blue laws to prevent weekend shopping — the government insists the law is inflexible and to get creative in finding solutions for unnecessary problems.

Take for instance the various small businesses of the Plateau Mont-Royal targeted by what has to be the most zealous business inspector in the entire province. Several small independent businesses — mostly record stores — were hit with fines of several thousand dollars in 2019 for staying open past 5 p.m. on weekends. In several cases, business owners told Cult MTL that government inspector (and former police officer) Jacques Goudreau had told them they were only being warned, yet were fined anyway. In several cases, the inspector entered stores just after 5 p.m., though in others businesses were fined for having signs indicating they would be open late for Record Store Day. Daniel Hadley of Death of Vinyl said that Goudreau entered his store before it was supposed to close and that he stated he was following up on an anonymous complaint. Hadley’s partner thought they were being scammed and promptly ushered everyone out of the store and then changed the hours to comply with the law. They received their fine in Feb. 2020.

Provincial law determines the hours in which businesses can operate, limiting how late they can stay open. The rules are not universal, however, and most large chains are able to get around this. The nearby Renaud-Bray, as an example, is allowed to stay open late because it sells periodicals. Other record stores, such as those located on Mont-Royal Avenue, can stay open late because they’re in a designated tourist area. If the stores targeted with fines sold tobacco products or alcohol, and/or listed their records as antiques or works of art, they could potentially get exemptions to the law as written. But simply staying open late to meet potential consumer demand in a commercial area isn’t good enough. Moreover, there are no limitations on online shopping, meaning small independent businesses are further disadvantaged in a province that stubbornly insists on micromanaging when businesses can operate, based on laws written, for the most part, in 1990.

While the city of Montreal decided to re-classify record stores so as to extend their operating hours, as far as the province’s ironically named Economy and Innovation ministry is concerned, the fines still apply because they were issued before the change. Similarly, even though Minister Pierre Fitzgibbon has extended operating hours to help small businesses compete during the pandemic, fines issued before the pandemic for staying open late still need to be paid. According to ministry spokesperson Meghan Houle, even though the city of Montreal changed the law to better suit record stores, “…these changes only went into effect in April of 2020, and because the infractions were committed in 2019, the fines remain.” Questions to the ministry about the conduct of the inspector or specifics relating to these cases were not answered.

The zealousness of the inspector’s application of the law contrasts sharply with the conduct of Minister Fitzgibbon, who has twice been cited by the ethics commissioner for violations of the code of ethics — including a conflict of interest case where he nominated a friend to be CEO of Investissement Québec, and by retaining shares in two companies while serving as a cabinet minister. In the most recent case, Ethics Commissioner Ariane Mignolet recommended that Premier Legault sanction Fitzgibbon for the repeated ethics violations. Opposition parties have asked Fitzgibbon to resign, though the Premier says Fitzgibbon has his full support and confidence.

As to whether the city or the Plateau Mont-Royal borough could do anything to help the businesses still on the hook for these fines, Mile End city councilor Richard Ryan stated categorically that elected officials cannot intervene given the separation of powers. He also recommended record stores “do a kickstarter” and that such an event would be good for business. A translation of the full quote, original winking smiley face included, is below:

“No we cannot intervene on fines even less when it comes from another level (of government). Even if there would have been a de facto approach with elected provincial officials, elected officials never interfere with these police or inspectors’ interventions because there is a separation of powers.

“For their money problems, it seems to me that a crowd-funding event would quickly collect their $ which they need in addition to attracting a clientele. This kind of organization should be creative enough … ;-)”

Jordan Robson-Cramer, co-owner of one of the targeted businesses (Phonopolis), is not impressed.

“Obviously starting something like a GoFundMe or a fundraiser to help out the situation we are facing is something we have already thought about, but the particular brand of tone-deafness of the government throughout the months — both the municipality and the province — is beyond frustrating. Ryan’s paternalistic response is the sort attitude we are trying to fight against. I don’t want charity. Businesses like mine — whose creative cachet and support of local community is exploited constantly by the government for their own financial gain — the role we play in this city (is) what makes this city cool and vibrant to begin with. The fact Richard Ryan feels comfortable writing that statement strikes me with the smugness of someone who has forgotten what their responsibilities are to the population they represent. It’s become clear to me that he — and many others in Projet Montréal — only pay lip-service to the social solidarity they advertise in the press and on their social media as a form of political optics.

“Why don’t you start a fundraiser, or get in touch with the inspector, or spend hours on the phone trying to break through the obstacles of bureaucracy, set up intentionally to discourage people in these kinds of situations who need help? Why is it mostly up to the people being persecuted to have to find a way to figure it out for ourselves to avoid bankruptcy and eviction?”

When asked whether he was benefitting from other forms of pandemic-related small business support, Robson-Cramer related that while he appealed to his landlord to sign up for the rent subsidy, the landlord neglected to do so and the deadline was missed.

Robson-Cramer added that in addition to the financial hardship caused by the pandemic “…we’re being decimated by corporate incentives and real estate speculators and then (told to) shoulder the weight of these situations and ‘find a creative spirit.’ This whole ordeal really makes me want to give up and throw in the towel.” ■ 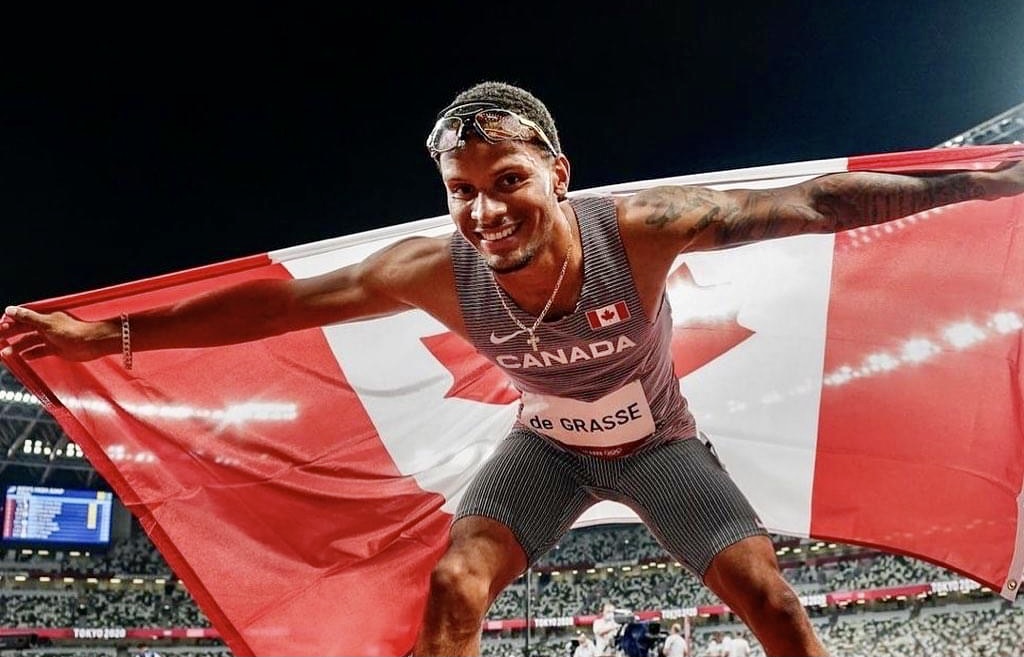 The fifth Olympic medal for the superstar sprinter.