Exquisite Mariposa is the debut novel by former Montrealer Fiona Alison Duncan, a story that centres around a millennial woman, also named Fiona, and her Los Angeles based peers — fellow residents of a home dubbed “Mariposa.” The novel is precisely millennial in that these characters come to live together out of a basic need for affordable housing and out of a communal desire to make art for a living. In an effort to combine the sanctity of her desires with her capitalist needs, Fiona signs herself and her roommates up for a reality television show based around their elusive lives. This is the premise from which the novel approaches the phenomenological state of “The Real.” The story is undeniably glamorous, as both Fiona and her dazzling characters run around on a whim in Los Angeles of all cities, while also undeniably raw, as the novel strips away the ? to unfold a behind-the-scenes look at pervasive (s)existentialism.

Sruti Islam: One of my favourite lines in the book is, “Sober reality — trust me — is the most psychedelic.” Is it fair to try to define “The Real” as an unaltered state? I went back and forth with this question. The narrator obviously embraces drugs for the specific states of being that emerge out of them, and yet for many, drugs create false constructions of reality, while for others, they are conduits that reveal “The Real.” This isn’t a question so much about drugs, but about whether or not “The Real” refers to an experience veiled or unveiled?

Fiona Alison Duncan: It’s the morning after my official launch party and I feel as though I’m coming down from an MDMA trip even though all I consumed last night was two-thirds of a Negroni, two-thirds of a hamburger, a handful of fries, a third of an apricot and butter pecan ice cream sundae and five tall glasses of water. I don’t like this feeling. The narrator of Exquisite Mariposa does a lot of earthy drugs at the beginning of the book. Mindfully, but still. It’s not explicit in the text, but the narrator isn’t using by the end. She’s so not using, she hasn’t even noticed she isn’t using, and so there’s no more mentions of drugs.

I have a friend in Montreal who is training in psychedelic psychotherapy, and he says, “The clinical evidence [for its efficacy] is overwhelmingly strong for PTSD, depression, addiction and end of life anxiety especially.” I believe this, and I think it’s not even subtext that my narrator is self-medicating with psychedelics, marijuana and other ‘wellness industry’ products in order to calm her nervous system out of a “siren of anxiety,” this fight/flight/freeze fear loop that she’s been trapped in long enough that being out of it even for five minutes is an awesome, shocking relief. I would say the experience I describe as the Real is unveiled. It is a naked state of consciousness, naked like I am in this one picture that I wish I had on me to send to you — I’m four-years-old sitting with friends, also naked, from McGill Daycare, smiling in a public park, having just run through a sprinkler.

SI: I think this book most obviously qualifies as auto-fiction. At one point the narrator declares, “I can’t write fiction.” Given the use of your own name for the narrator, and the novel’s true-to-life components, what was your motivation in categorizing the book as a novel? In other words, how do you define the novel genre?

FAD: I love the word novel, like new, strange, unusual. There are a lot of hyperbolic statements in the novel, right? As soon as I wrote, “I can’t write fiction” — I wrote it laughing — it stopped being true. I learned how to write fiction while writing Exquisite Mariposa. There are sections that are journalistic — “on the record,” I used a tape recorder, fact-checked — there are sections that are diaristic, there’s memoir, fantasy and there are more traditionally fictitious passages.

SI: As a lifelong Canadian-Montrealer myself, it’s super comical — I literally laughed out loud — to hear the novel’s Canadian narrator interact with her American peers. There’s this one line: “‘Oh, you’re just a Canadian—’ is how well-to-do Americans write me off when I get all rah-rah class-conscious lately.” Can you talk about the difference in talking money/class with Canadians vs. Americans?

FAD: We were talking about this at dinner last night. I was trying to explain some of the differences in values, ethics, money, and their performance or gamesmanship in Canada vs. the States to a Texan. My example was: In Canada, I feel like, if you act humble, while doing a good job, you’re likely to get a raise, at least in fields I’ve been in. If I said something like, “Oh I love this work so much, I would do it for free!” bosses I have had would then reward me with more money. In the States, I’ve said things like this. Don’t. People think, “Oh, she’s an idiot!” or “She must be rich.” Assertiveness, the hustle, hunger and self-promotion are rewarded here, or at least in New York. California felt more like Canada; I was exploited less there, but I was also older, and culture had changed more towards “listen to girls/women,” so maybe that was it. In the example I just shared, the reality is, the Canadian statement, the way I would deliver it, was intended to get me the raise. That was the script I knew would be rewarded for someone in my position. I still don’t get the rules of New York and the States, but I think that’s a great position to write fiction from.

My next novel is even more about financial illiteracy and humour around money and class, including notes on national differences. The personalized debt situation and lack of healthcare in the States is really serious. There’s an American podcast called Death Panel that published a meme that reads: “If you don’t support medicare for all, you want disabled and poor people to die.” The “want” is inflammatory, but it’s true: the system punishes poor, disabled, neurodiverse and ESL people.

SI: The narrator struggles with a desire to maintain a productive purity while facing the realities of capitalism. The purest quality in the narrator, to me, however, was that this frustration came out mostly as a kind of rage for her friends and loved ones, more than on her own behalf. She’s tired of seeing her artist friends struggle, and it’s almost like she believes once they stop struggling, she will, too. Is this an idea of the self being defined by their community? Is that a productive or harmful line of thinking?

FAD: The martyr whose selfless, intentioned acts are actually selfish in their consequences — she runs in my bloodline. I’m wary of her. The narrator has a habit of living vicariously through others, that’s for sure. It can be creepy, a turnoff. It can also be sweet. It’s young? I wanted to write a Young Adult novel. Something I could’ve enjoyed reading that might’ve saved me from a decade-plus of post-puberty shame, angst, isolation, longing and wasteful efforts of compliance. I think the narrator’s desire for her friends, family and for herself to all be more present is kiddish. She wants more people to play with.

SI: My last question is about boys! The narrator remarks on a quality she finds attractive in them:  “…a demonstration of their intelligence, being above normative structures.” I underlined this and then took a photo of it on my phone, and then sent it to all my straight girlfriends asking why we all loved this about boys? In the book the narrator expands to suggest that it demonstrates a kind of freedom and autonomy we envy, and desire for ourselves. How do you think this lines up with the satisfaction that comes from being impressed?

FAD: A friend has a photographic memory; I’m in awe of her precision. My memory is cloudier, which maybe relates to what this friend says she admires in me: a capacity to see connections between things. When I was younger, it’s very likely I would’ve said that my friend’s memory is better than mine, because it’s better at taking tests and flaunting facts, proofs of intelligence that were rewarded by our families, schools and culture. In the arts especially, but also, it seems, in business, gendered-boy/men have been rewarded for performances of transgression (the dickswinging rockstar, rebel, selfish slacker, entrepreneur). Rewarding those modes of behaviour feels highly irrelevant now, toxic, even dangerous. A hero has been one who has conquered. What happens when you disbelieve all hierarchies? ■

For more coverage of books in Montreal, like Exquisite Mariposa by Fiona Alison Duncan, please visit the Arts section.

Additionally, to vote for your favourite Montreal authors in the Best of MTL reader’s poll, click here. 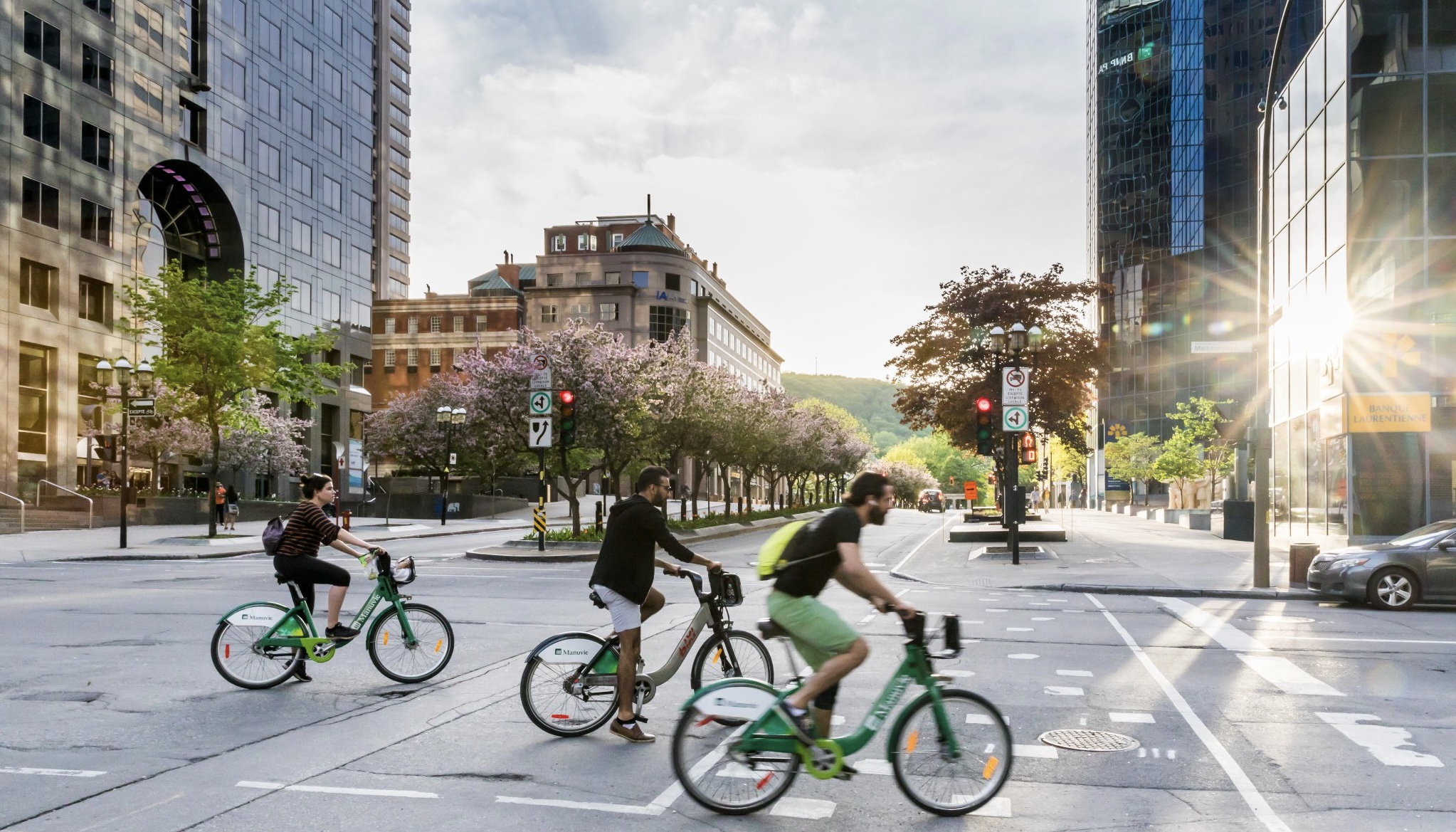 Mayor Valérie Plante has reacted to an editorial commending her record on the environment.

“Did someone say the pandemic isn’t done yet? I couldn’t hear you over all that jazz!”