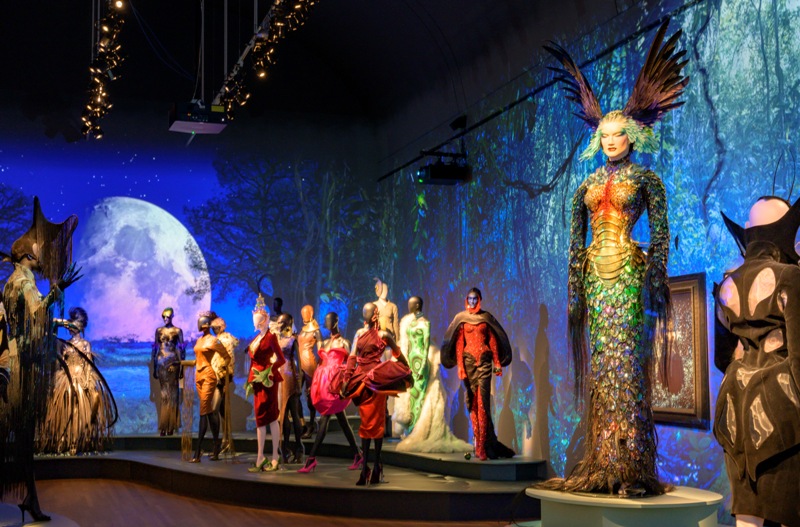 An assortment of heavily perfumed international fashion and art press gathered in the bright upstairs atrium of the Museum of Fine Arts on Feb. 26 to hear about the opening of Thierry Mugler: Couturissime, the first such career retrospective to be presented — ever. The French designer is notorious for having turned down all previous attempts to show his work in a museum rather than on a runway. Clearly Nathalie Bondil, the museum’s director general and chief curator, and model-turned-curator Thierry-Maxime Loriot, have charmed Mr. Mugler (who now also goes by Manfred).

Bondil, in the preamble to Mugler’s arrival, talked about the sheer exclusivity of runway shows. “It’s easier to see a painting by an impressionist — every museum has one — than to see fashion up close. When you want to see haute couture, vous allez où?” And indeed, outside of textile-specific museums, it’s not often that you get to see, in person, the kind of fashion that only the mega-rich can afford.

Mugler claims this show is organized “like an opera…a tragédie glamouresque.” Well, I don’t know if I’m convinced that it’s operatic, but the stagecraft is certainly evident, managing to be an homage to Mugler’s penchant for dramatic runway shows without being too on-the-nose. The opening room of the exhibit is so dark when you stumble into it that it feels as if you’ve made a wrong turn and ended up backstage. This sense of being somewhere you’re not supposed to be – a famed socialite’s closet, say – continues to great effect as you snake your way through the enormous collection.

We are eased into Mugler’s style with a room whose emphasis is heavy on archive: Bowie, Madonna, Lady Gaga and many others dressed in his collections, as well as footage of a gleeful runway show in which models ride sleighs down what looks like a Dr. Seuss inspired luge. Then, as if we’re now in on his admixture of Vegas glam and car-inspired corsets, we enter a (relatively) more austere black and white section, then a rather cosmopolitan aquarium and rainforest habitat, ending with an enticing if seemingly proto-fascist sci-fi mirror-scape. There’s a riff on Bride of Frankenstein if the white of her hair was fiber-optic, pert metallic bums you can literally see your reflection in and a dress that looks like a car tire and a woman entered a fire together and somehow emerged unscathed yet permanently fused. Throughout, the archival element allows us to access not only the clothes but the era that spawned them. In particular, Mugler’s collaborative professional relationship with the photographer Helmut Newton shines through — Mugler described him, with total sincerity, as “an adorable man.”

Very few of Mugler’s creations are behind glass, meaning you can actually get close and see the workmanship. The striking scaled bird dress you might be familiar with from the exhibit’s ads, for instance, is a very different beast in person. You can see the texture of all the tiny red beads splashing down the dress’s front like so much roe, as if this glutonizing bird of prey had just ripped open and gored a sturgeon.

It must truly have been something to see Mugler’s shows in person, but this sprawling exhibit gives you the chance to view his work at your own pace, which is a pleasure indeed. Better yet, Mugler rather sheepishly grinned and hinted at a future project with the Bolshoi, so there is more to come. ■

Thierry Mugler: Couturissime is on at the Museum of Fine Arts (1380 Sherbrooke W.) through Sept. 8, as is the accompanying exhibit Montreal Couture.