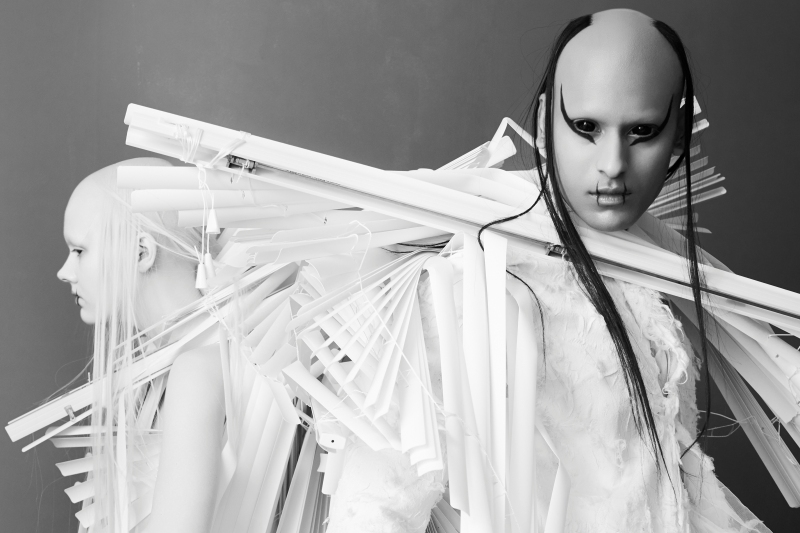 As a companion exhibit to the Museum of Fine Arts’ premiere of Thierry Mugler: Couturissime, Montreal Couture showcases the work of 10 contemporary Quebec fashion designers.

The designers — Philippe Dubuc, Denis Gagnon, Ying Gao, Helmer Joseph, Nathon Kong, Marie-Ève Lecavalier, MARKANTOINE, Fecal Matter, Atelier New Regime and Marie Saint Pierre — represent a broad spectrum of style that’s either emerging or established in Quebec, from Dubuc’s fairly traditional menswear to the gross-out performance/fashion duo Fecal Matter, known locally for the backlash they aroused after associating themselves on social media with an image of a Syrian child. They claimed the image was part of a broader critique about the media benefiting from humanitarian crises, but the message was murky and lost to its own poor taste. Globally they’re known simply as cutting-edge. They rustled into the press conference to much fanfare and frantic picture-taking. The duo New Regime, originally from Togo, managed to dress seemingly exclusively in their own designs and still seem easefully cool in signature orange. Thierry-Maxime Loriot, who curated both this selection of Montreal designers and the Mugler show, practically beamed with local pride: “I was touched by the talent we have here…we have nothing to envy of Paris or New York.”

Yet, a strange thing happened seeing first Montreal Couture, then the Mugler collection and then returning for another peek at the local fashion. There was much joking about Mugler’s show being a celebration and not a funeral, even though he no longer makes haute couture, but if anything the Montreal section of the exhibit did feel a little dead. It was certainly more sombre — everything lit in the same dim and spooky way as if to say, “See, this is serious.” The gleefully alien (and alienating) work by Ying Gao worked in this context, but more playful clothes, like the jackets by Nathon Kong with their wildly colourful linings, felt dampened by the generally dark ambiance.

There was something comic about watching Fecal Matter photograph each other in their shadowy corner of the exhibit for future Instagramming. Their infamous flesh boots, laid out like specimens, had completely lost their aura, as Walter Benjamin might say, making clear this strange phenomenon of an appeal that can exist exclusively online but waste away in the real world. Seeing Hannah Rose Dalton, one half of the pair, clomp across a room to retrieve a forgotten iPhone, I was struck by the extent to which what is compelling about Fecal Matter only exists, in a bleak millennial stereotype, on social media. The real-life version is oddly and paradoxically quaint. Fecal Matter are certainly not alone as fashion meant more to be photographed than to be seen IRL, but their presence gave me pause for more than just their sheer pollical gormlessness.

Nevertheless, there is certainly something daring about showing living fashion in a gallery context, especially haute couture; to suggest that you’re allowed to look at fashion, to be inspired or to get frustrated regardless of intent to buy. No need to nervously step into an Old Montreal boutique in your damp Sorrels under threat of shop clerk glares. As an addendum to the colourful Mugler, it’s hard not to be blinded by the razzle dazzle of one truly eccentric and successful career, so I would suggest you give the local designers their due and look at them first. Be a little subdued and thoughtful, then go celebrate the sequined bird people next door. ■

Montreal Couture is on at the Museum of Fine Arts (1380 Sherbrooke W.) through Sept. 8.