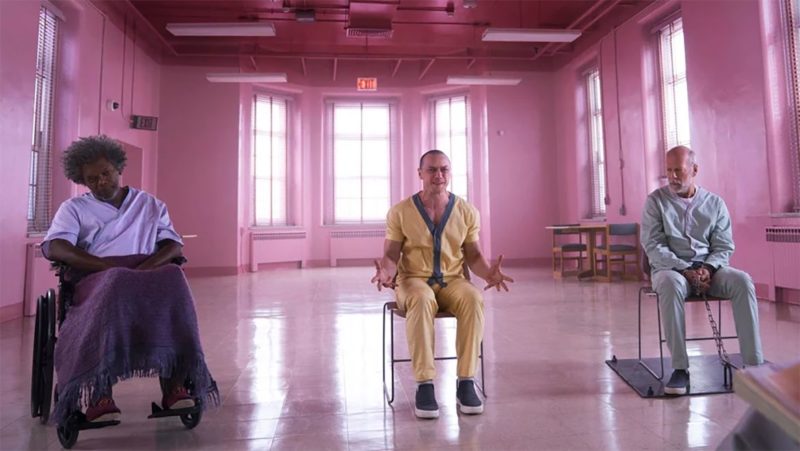 I consider the nadir of M. Night Shyamalan’s career 2005’s Lady in the Water — not because it’s his worst movie (it would get considerably worse after) but because it’s the one in which the director casts himself as a novelist whose work is so incendiary and says so much about the world we live in that he’s assassinated, essentially making him an artistic martyr. Not even Kevin Smith or Quentin Tarantino at the height of their cult of personality days would have dreamt of such masturbatory flights of fancy; it became quite obvious that Shyamalan was getting accustomed to the smell of his own farts at this point, and the work did not bear out that audiences were ever going to learn to love that particular aroma.

I think about that scene from Lady in the Water every time Shyamalan puts out a new movie because he stands about alone in the American mainstream when it comes to the particular mix of supreme confidence and terrible ideas he’s delivered since then. It came to a head with Split, a thoroughly disposable bit of B-movie hokum that Shyamalan eventually spun out into a follow-up to his hit 2000 film Unbreakable. Split is exactly the kind of low-stakes exploitation movie that gets churned out by the hundreds every year (except, perhaps, for James McAvoy’s effort-heavy performance), but it is painted with such portentous and heavy strokes that you couldn’t mistake it for anything but Shyamalan going somewhere. And, truth be told, he didn’t get it all wrong with his Lady in the Water character: he did, to some extent, predict the superhero movie craze nearly two decades back, and he’s here to self-immolate on whatever’s going to be left of it once he’s done squeezing whatever life was left in this plodding “real-life superheroes” concept.

Glass begins where Split left off — with Kevin Wendell Crumb (McAvoy), a former zoo employee with 23 different personalities, holding some cheerleaders hostage in an abandoned factory. Kevin needs to feed “the Horde” by destroying innocents who have never known pain, and he does a fairly decent job of it until David Dunn (Bruce Willis) crosses his path. Dunn was given special powers in a train accident some 20 years ago, and he’s spent the ensuing two decades using those powers to fight crime vigilante-style with his son Joseph (Spencer Treat Clark). David manages to free the cheerleaders, but his wild (and not legally sanctioned) behaviour lands both him and Crumb in a mental institution run by Dr. Ellie Staple (Sarah Paulson), a psychiatrist who specializes in people who think they’re superheroes. Also a patient at the facility? Elijah “Mr. Price” Glass (Samuel L. Jackson), the brittle-boned madman who faced off against Dunn in Unbreakable and has consequently spent the last 20 years heavily sedated under Dr. Staple’s watchful eye.

The central concept is simple enough: create a superhero universe that exists on its own, without the added weight of canon and intellectual property and all that other shit that makes most superhero movies look the same. I’ll grant Shyamalan that: this is not a superhero movie that plays like any other superhero movie, despite its overt ploys to explicitly spell out what it does and doesn’t do by the book. (I’m not even exaggerating here — by the third act, there’s a character who starts just yelling out which part of the classic superhero storytelling structure we’re now moving into — not so much in a meta Deadpool way so much as a would-be menacing “dance puppets dance” way.) But it’s not much of anything else either, a talky slog of a movie that mainly consists of the cast running circles around each other and slowly, painfully drawing out all of the backstory as it lays out a forever-grander vision for Shyamalan. Like Split, Glass is severely hampered by the fact that the director already seems to be looking past it, laying down the groundwork for something presumably larger in the future without bothering to really work out what’s in front of him first.

There’s a certain level of cynicism to the proceedings as well. In “re-inventing” the superhero genre (I’d argue that the film does more re-explaining than it does re-inventing), Shyamalan can’t help but kind of shit on it in the process. It’s the rare film that uses a kind of meta self-awareness to comment on itself in the process that also uses that process to self-congratulate rather than self-deprecate. On one hand, I have to hand it to him for trying something new: promising a sci-fi action romp and instead delivering a dour, talky bit of meta deconstruction. On the other, none of it particularly works beyond the theoretical level. It’s the kind of movie that will intrigue anyone you talk to about it before they actually sit down and watch it to find that it’s really just an aimless mess.

As I mentioned before, Shyamalan is an extremely confident filmmaker. For better or worse, he truly does get his voice across in all his films. Unfortunately, here the voice is that of a guy who fortuitously predicted the dominant film genre some years before and is now backtracking and acting as if this was the plan all along. Frankly, not much of Glass feels organic at all — it’s all fumbled and duct-taped together, one insanely overdone performance (McAvoy — who, as if he knew he would necessarily have less screentime in this one, somehow cranks it up a notch) and one totally listless performance (Willis, who brings the kind of “Dad fell asleep watching the golf game on TV” energy that is now his bread and butter) duking it out around in a movie that has more ideas in it that it will ever know how to express. ■