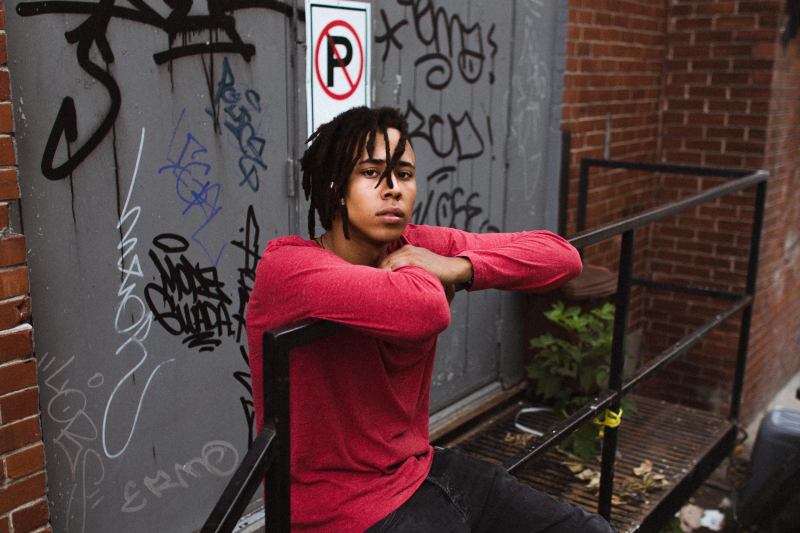 There is no surefire way to achieve fame and stardom, no blueprint to study or recipe to follow to ensure you end up at the top of the heap. Talent exists, but talent only takes you so far. The same principle holds for money, connections, looks, timing, work ethic and whatever else.

I have seen Zach Zoya perform precisely once and spoken with him the same number of times. To date he’s only released a few singles and collaborated with High Klassified on an EP, Misstape. It remains to be seen whether or not this 20-year-old singer/rapper from Rouyn-Noranda, Abitibi-Témiscamingue is going to rise to Drake-like heights — but I am absolutely sure of one thing: Zach Zoya is going to be a success. The kid is a real one.

When we meet, though, he’s a tired one. He’s just returned from France where he performed his first-ever set in Europe at les Rockomotives in Vendȏme, Loir-et-Cher, and he looks like he needs a coffee. Our server is charming and animated and Zoya is kind to her. He doesn’t notice I notice this.

An hour later, when it becomes apparent that my iPhone has malfunctioned and deleted our entire interview, he is undeterred. “Fuck it, let’s go again,” he says.

When we go again, he doesn’t try to replicate what he said on the lost recording. Rather, he tries to refine what he said. Previously, he explained that he moved to Montreal at 17 to live with a friend whose father moved here for work. The second time around he discusses what the move represented. “That’s what really allowed me to be a rapper, to disconnect,” he says. “Moving to a new city allowed me to reinvent myself.”

At home in Rouyn-Noranda he was known as an athlete. He doesn’t say jock but that’s what he means. In Montreal, well, he says it best when he basically narrates his reinvention: “It’s a new city, it’s a new me. Now it’s not Zach the hockey player, now it’s Zach Zoya the artist.”

Zach Zoya the artist has three older sisters whom he credits with getting him into music he wasn’t into or aware of, specifically R&B. It’s probably fair to say that his song “Superficial” would not exist if not for them. It’s definitely fair to say that they’re why his lyrics don’t trend towards misogyny.

Zach Zoya the artist has parents who support him. His father is from South Africa and his mother is from South Quebec — Saint-Hyacinthe. He doesn’t rap about how hard he is or how tough it was coming up because he grew up in a loving home in a stable community. His mom is a doctor. Music was a choice, not a way out. “I hated it as a kid but now I’m super glad I grew up in a small town,” he says. “It gave me that mentality of not being corrupt.”

Later, he expands on this. “I had to be honest with myself. If I was going to be that fake ghetto guy, then my mom was going to call me out. I’d feel bad about myself, you know. Not even people being like, ‘You’re fake, Zach!’ It’d be me to myself [saying] I’m not being authentic right now.”

His parents are “super supportive” of his career, by the way, but he admits he had to convince his mom that trying to be an artist was a good idea. “I couldn’t just be like, ‘Yo mom I’m dropping out for this rap shit.’ What really convinced them was the actual music. I showed them the music and they couldn’t deny it was kind of good. If it was trash, my mom would have told me. My mom and my dad are the kind of people [who] would tell me.”

Zach Zoya the artist has flow. “Who Dat” is proof enough of this, but also of something else, something young artists don’t commonly have. He’s playful.

In the first and second verse of “Who Dat” there’s a repeated focal point, a refrain. In the first verse it’s “lil boy.” In the second, it’s “lil bro.” That’s where he gets clever. Zoya turns “lil bro” into “liberal” which allows him to introduce “Trudeau” which he turns into “true though.”

Label: coloured, contract: koodo lil bro /
If you hadn’t been briefed you will soon know lil bro /
I’m on the Parliament Hill chilling with Liberals lil bro /
Think we should legalize weed, Trudeau at the back like “true tho”

He explains this construction in regard to how the sounds work, not to how the words work or what they mean. He has had no formal musical training but he knows what sounds he likes, and which sounds he thinks instinctively fit. He discusses his teenage obsession with Eminem’s “Lose Yourself” but admits he didn’t know what the lyrics meant because he didn’t really speak English and, moreover, he didn’t really care what they meant — just how the pattern worked. In fact, despite singing and rapping in English he still doesn’t consider himself bilingual.

“Language is a code, and the code is specific to where you’re from,” he says. He gives the example of a Quebec French expression that an English speaker in Montreal would not understand. I speak passable French but I don’t understand it. The point is made. “I know that in another language you can structure [phrases] another way. I think that gives me an edge, an advantage when I rap, because it’s always a matter of what can you fit in what hole.” To his credit, he grins but does not laugh when he realizes what he just said out loud.

At 20 years old, Zach Zoya the artist is already more than a 1000-word article can communicate. He will continue to be more. ■