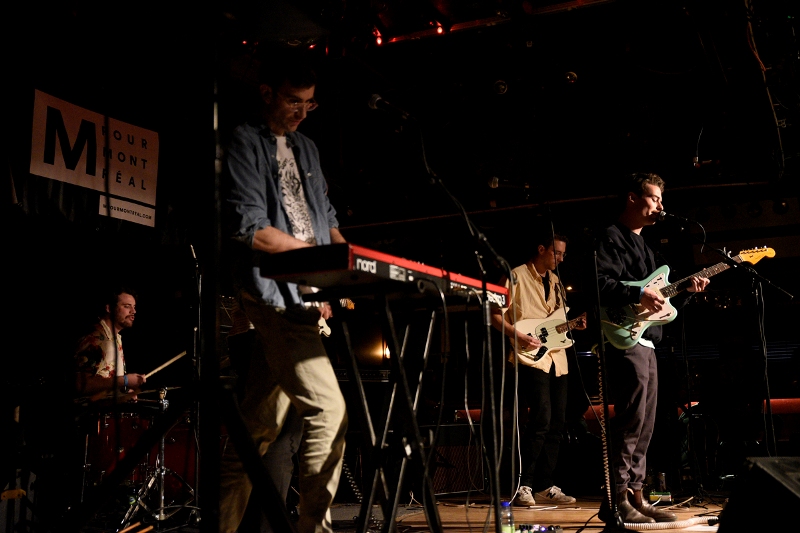 As they do every year, M for Montreal filled venues across downtown, the Plateau, Mile End and beyond last week, mounting dozens of shows featuring over 100 (mostly local) acts on Wednesday through Saturday night. Our Music Team and photographer Cindy Lopez were on the scene to document some of the most promising bands in the line-up. Here’s what we discovered:

Beach Body played Café Cléopâtre last Thursday, sharing a pretty strange bill that included Chilean grunge revivalists Adelaida. Once that sweaty affair ended, the five-piece from Regina took the stage and turned the frenzy down. Their chilled out sound felt a little out of place at first, given the evening’s earlier set, but they sounded tight, and their frontman Rory Copithorn was charming, even inviting some people up to dance on stage. The set lacked some bite, but they were still good. I’d be curious to see them on a more fitting bill, playing for more than 30 minutes. (Brandon Kaufman) 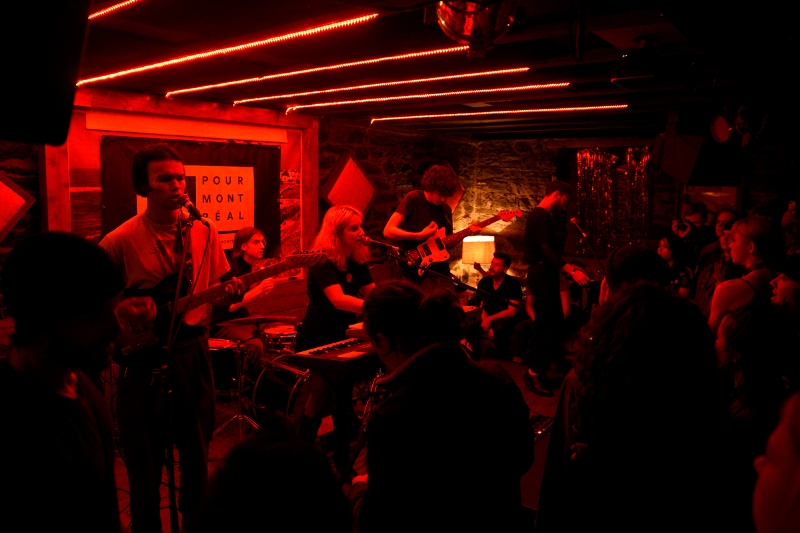 If someone describes a band to you as chill, that’s usually just a nice way to say they’re a drag to see live. But Bodywash, who have earned a reputation for their mellowness, isn’t one of those bands. The live stuff they played at l’Esco on Friday had an edge to it, heavy and seemingly spontaneous and, most shockingly for this sound, not sounding rote. They went for highs, and even if a track or two didn’t build toward something entirely satisfying, it was still nice to see some, like, exertion. All in all, they’re talented and passionate musicians with promising prospects. (BK) 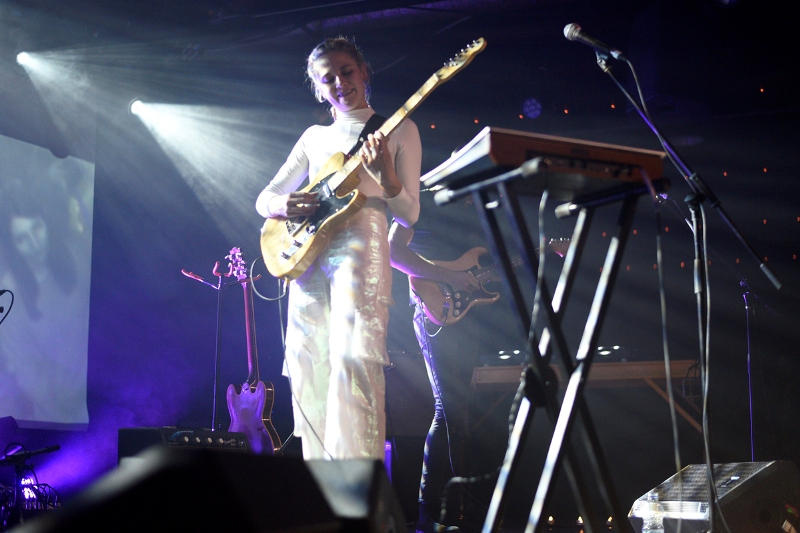 The audience’s disregard for opener Tess Roby (see below) was pretty puzzling considering the crowd wasn’t exactly waiting for Metallica to come on, they were waiting for Helena Deland, another female singer whose music demands close attention. But clearly it was Deland who had drawn the bulk of the audience that night, an audience that finally shut the fuck up to hang on her every word and strum. Deland’s charmed poetry and atmospheric sound casts a spell reminiscent of Joanna Newsom (though her vocals are more grounded on earth) and Leonard Cohen (not that grounded) — high praise, but this is powerful stuff, with a powerful stage presence to match. Her sound is eclectic, veering from indie rock to folk to synth ballads, but her voice —her singing, yes, but moreover her way with words — ties it all together beautifully. (Lorraine Carpenter)

DeusGod is a proud black man with a Confederate Flag scarf carefully tucked around his neck. This alone is a sight to see.

Shock value aside, the rapper is one to watch, with the recently released “I’m Widdit” serving as an undeniable Montreal turn-up anthem for 2018. The other, predominantly new songs proved this momentum will likely continue into the coming year. His belligerent energy has him poised to be Montreal’s very own Juicy J. Throughout Friday night’s showcase at le Belmont, many tried to get the audience feeling rowdy, though nobody achieved it quite as successfully as Deus. (Mr. Wavvy)

The new music venue Diving Bell Social Club is temporarily dry (the reason why is a long story involving a random bureaucratic error), so on the recommendation of the bartender, I ventured downstairs to Blizzarts for a fast pint before catching Montreal synth waver Xarah Dion. Dion herself showed up there for a pre-show shot, and by the time I followed her upstairs (I’m not much of a chugger), she was already on stage. The crowd was thin, and presumably fairly sober, but remained committed to enjoying Dion’s driving synth sorcery and versatile vocals, which ranged from the kind of monotone exclamations typical of synth wave to beautiful, borderline operatic singing. Bathed in the blue and orange lights of her projections, Dion swayed and sang and operated tablefuls of keys and effects like a champ, always keeping us engaged by drawing out her coarse synth lines and dropping beats at the best possible moments. (LC) 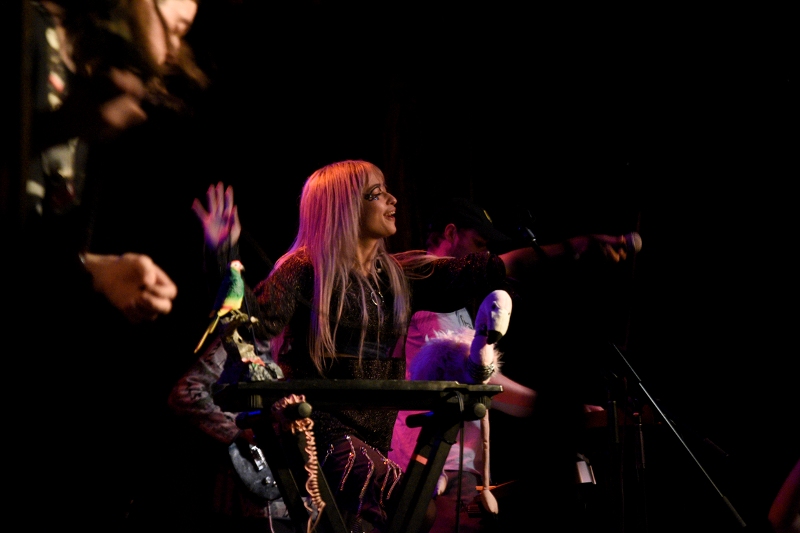 Kero Kero Bonito were a band that were long criticized for their underwhelming live performances. As recently as last year, the band’s set-up featured lead vocalist Sarah Bonito on the mic, with member Gus Lobban on the turntables doing the absolute bare minimum: button-pressing, with the occasional keyboard integration or transitional effect.

With KKB’s 2018 release Time ‘n’ Place came some fine-tuning. The band went in a more rock-oriented direction, with the results paying off live big time. Now a full five-piece band, the British boppers held a dynamic to bring forth the crowd chaos they deserved. Moshing was in abundance, and the reception was warmer than ever.

Though changes had to be made, Kero Kero Bonito still hit a stride hanging on to their “cutesie” aesthetic. Just when you thought the band was out of stuffed animals to sit on their shoulders, out popped a flamingo for their triumphant track dedicated to the beloved bird. More often than not, the concert felt like a real life meme, the aforementioned tune embodying the feeling perfectly. (MW)

Fresh off the heels of a new single and album announcement, the former Dears guitarist took to O Patro Vys to close out Friday night’s festivities. Distancing himself from the Montreal indie-rock forefathers he began with, Krief ‘s solo material finds his sound rooted in flexing his technical abilities.

For years, the Dears have been synonymous with the word pretentious (the band has been voted into the Most Pretentious Acts category in Cult MTL’s Best of MTL list on a number of occasions), but the guitarist’s set suggested he’s distanced himself from that tendency, creating music that has a potential to reach a new type of audience in the next phase of his career. (MW)

When asked about his favourite local acts at this year’s festival, M for Montreal programmer Mikey Bernard noted rapper Maky Lavender as one of “the freshest kids on the block right now.”

Admittedly, Friday was my fourth time seeing Maky live this year, my second in a matter of days alone, after catching him open for Lou Phelps last week. With a perfected “shoot dance,” words of respect to Pharrell Williams, and drink-sipping in motion every single time, it’s beginning to feel a little like I’m in The Matrix.

All this to say, Lavender has his show down to a science. Songs like “Ukannafo” and “Swole” are particular smashes, his feel-good energy earning some of the warmest reception out of all the songs that rang off throughout Multiply MTL’s busy billing. (MW) 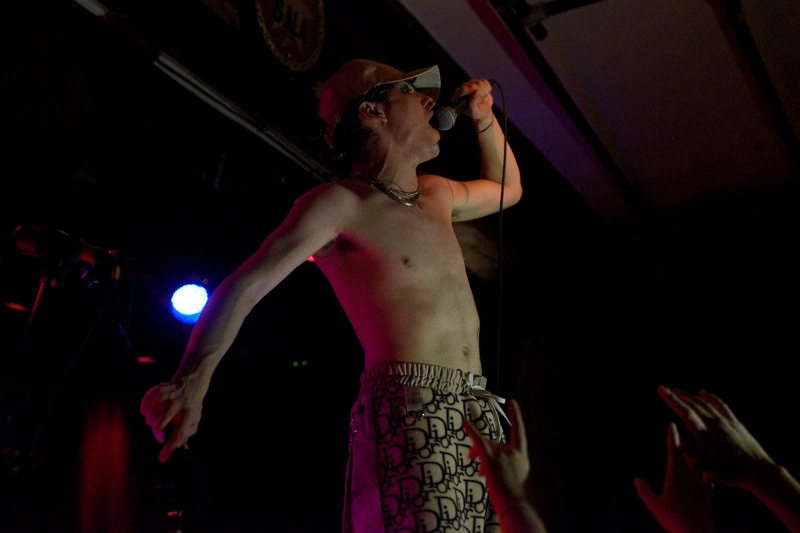 This fucking kid knows what he’s doing. After catching provincial attention this year with high-profile TV appearances on La Voix and Tout le monde en parle, playing big gigs like the FrancoFolies and FME festivals and even attracting the ROC by jumping on tables and swearing at the Polaris Music Prize gala (he was there because his album Darlene had been shortlisted as one of the best Canadian records of the year), Lenoir is living the dream and living it large. His antics during his M for Montreal set at la Sala Rossa — where he was cheered on by a throng of fans who were grabbing at him like he was loose cash — included making out with a (male) bandmate, crowd-surfing, spitting, swearing and advising the audience to never deep-throat someone you don’t respect, all while singing his heart out. Lenoir’s supersized glam rock sound sometimes borders on absurd, but it’s hard to resist, especially when the showmanship is so steep. This kind of spectacular, unpredictable act doesn’t come around too often, so let’s enjoy it. (FYI, he just launched a surprise album, Midnight, Let’s Get a Hot Dog — check it out.)

I raved about Pottery last time I saw them, and I’ll do it again. These guys fucking own. Even playing with two people not in the band — who were filling in for Pottery’s usual keyboardist and drummer, currently on tour with another band — they managed to play an equal parts loose and frenetic kind of post-punk that seriously blew me away. The capacity crowd at la Sala Rossa on Saturday were sometimes moshing, sometimes dancing as Pottery effortlessly played some funky in-your-face cuts, then seamlessly transitioned to gloriously chaotic lo-fi noise. Man, what a show. I need more. (BK) 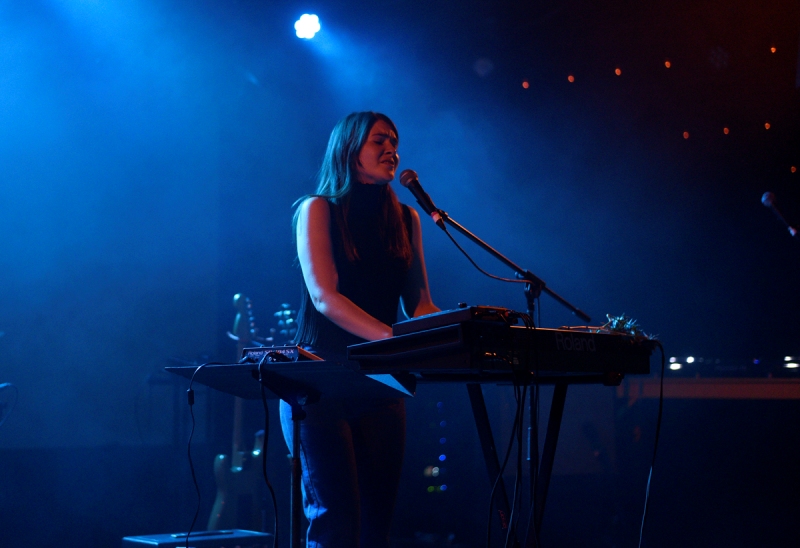 Unless you were right up front, and had experienced enough noisy shows to tune out the clatter, it was hard to enjoy Tess Roby’s set at Theatre Fairmount on Friday night. The Montreal-based, Toronto-born singer-songwriter makes beautiful music with a light touch, her lush vocals and synths accompanied by her brother Eliot on guitar — while it was a full and satisfying sound, there was enough space within it to be overwhelmed by loud conversations that seemed to be happening all across the room. The disrespect continued even after a rep from Roby’s label (Italians Do It Better) came on stage to politely shame the crowd and request silence, à la elementary school teacher. The silence lasted the length of one song (if that), and Roby deserved much better than that. (LC)

These guys played such a fun show on Saturday at la Sala Rossa, sounding like the Grateful Dead if they weren’t so annoying (and I love the Grateful Dead!). They were laid-back, clearly having a blast. The audience was incapable of not dancing to that rhythm guitar and bassist/vocalist Joe Toner’s unique voice. The Montrealers served as a needed antidote to the countless squares who only play Very Serious Music. (BK)

4,744 cases of COVID-19 / Coronavirus have been reported across Canada according to the Public Health Agency of Canada, Johns Hopkins University and World Health Organization (WHO). 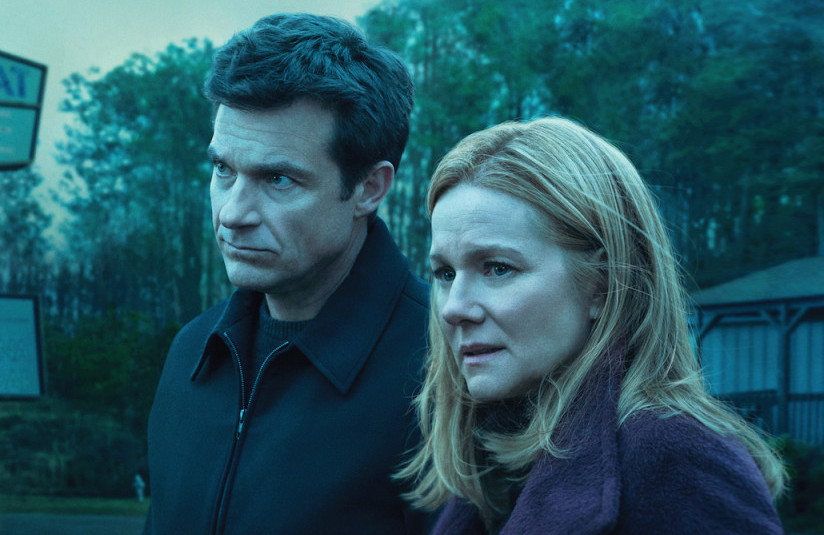 New seasons for Ozark and Nailed It!, the streaming premiere of Jusqu’au déclin and a heap of catalog titles all premiering on streaming services this week.