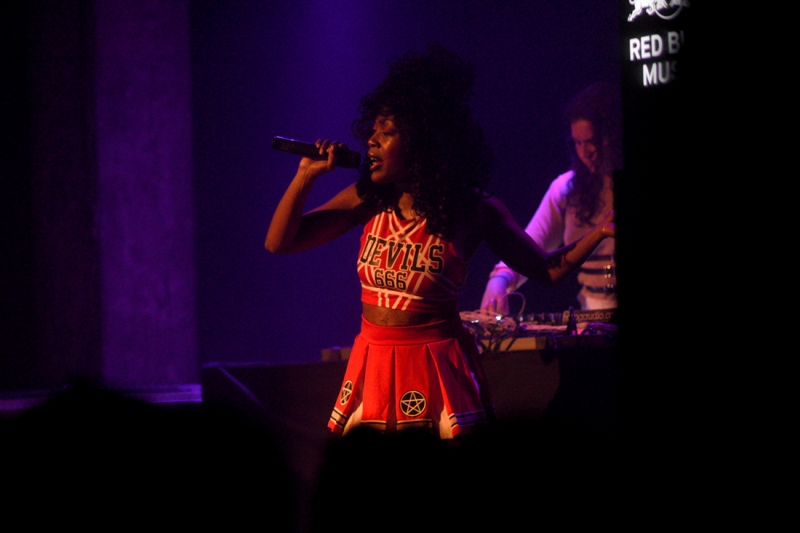 POP Montreal is a wrap, and it was another wild ride. These were some of the festival’s highlights:

Bbymutha, who played before SOPHIE at SAT on Thursday, was clearly tired, admitting as much with an apology to the audience. But the Chattanooga rapper danced and laughed and showed off a natural geniality more electrifying than any pyromaniac hype man. She played a few cuts from her BbyShoe EP — including stand-out track “BBC” — to an audience of about 150 people. The set ended after a little more than half an hour, by which time some of the crowd’s more diehard fans were drenched in sweat. Soon after the lights went up, a guy standing beside me turned to his friend and declared excitedly that he had just downloaded all her stuff on Spotify. (Brandon Kaufman)

I didn’t know much about Bush Tetras going into this show, but old-school post-punk and no wave has a lot of pull with me so I figured this band I’d seen name-dropped so many times was a safe bet. I’ve witnessed some shabby reunion shows in my time (and one, c/o the New York Dolls, that I’d categorize as disastrous) but this band seems to still have some of the spark that made them NYC scene queens back in the early ’80s. The singer, decked in a Max’s Kansas City tshirt that nodded to their origins (it was a NYC club/venue that coexisted with CBGBs and Studio 54), played cowbell and gesticulated with great showmanship and sang like the kind of raspy warrior poet that Patti Smith was at her peak. Lyrical left hooks and sizzling riffs drove most of the tunes home (their old stuff as well as relatively recent material, to my surprise), and though the set list wasn’t entirely killer, the peaks were high enough that the lulls were quickly forgotten. (Lorraine Carpenter)

If their Sept. 27 set at O Patro Vys was all you had to go on, you’d surmise that Caveboy was the most fun band in Montreal. An irresistible combination of energy, enthusiasm and straight-up ability, the three-piece brought a tremendous amount of JSI (joy per square inch) to the fore. Poppy and wave-y and dance-y and punk-inflected, there’s very little this set — which closed with a rollicking cover of Whitney Houston’s “I Wanna Dance With Somebody” — didn’t have. There’s something magical about a two- or three-piece that sounds (and feels) like a whole lot more; it’s a weird and welcome juxtaposition of economy and capacity. Most can’t pull it off but Caveboy could teach classes about it. (Dave Jaffer)

The self-proclaimed “Queen Elizabitch” has crowd control ability that would work wonders if she decided to become a cult leader. She puts a smile on just about every person’s face. The ability for her sex-positive setlist to resonate with so many people on a deeper level elevates her live show from a gimmick to a genuinely compelling experience. (Mr. Wavvy)

The Homeshake concert at Rialto on Saturday was confusing. The young crowd was packed and alive, dancing to the electronic music playing through the PA system. The band came out to shrieks, which only got louder as they played the first bit of “Every Single Thing.” But in an instant, that hype and excitement was razed. The set felt inert and lifeless, with the group failing to match the crowd’s level of intensity. Indeed, that’s a product of their relaxed sound — but smooth doesn’t have to mean boring. (BK)

It’s a Thursday night and le Belmont is the most packed I’ve seen it in years. Soon after the clock strikes midnight, a sea of awkward white boys lose their collective shit as alternative hip hop act JPEGMAFIA graces the club stage. He takes a long haul of his vape, exhales, and screams “Aye…Fuck Morrissey!” (MW)

This obscene entrance set the precedent for the next hour. Though he began onstage, the Baltimore lyricist spent most of his set in the crowd moshing. At some point, his bandana fell off, revealing a hairline that would make Homer Simpson feel great about himself. From 2011’s legendary Death Grips show to Dead Obies last year at MTelus, POP Montreal has been known to thrive with weirdo rappers. JPEGMAFIA’s performance was another memorable example. (MW)

POP’s Piccolo Rialto late night basement shows are an absolute highlight of the festival, but having a Wednesday show with a headliner at 1 a.m. was frankly disrespectful to the artist and fans alike.

Kilo Kish is a very theatrical live performer, with exaggerated facial expressions and dance moves playing a big role in how she navigates. Despite this, the few moments she went out of character seemed to have her feeling let down by the strange slot, albeit appreciative of those who came to bear witness.

In 2017, Kish delivered standout moments through features on albums by the Gorillaz and Vince Staples. Wednesday night was a treat in terms of getting to see what Kilo can do when the ball is in her court. (MW)

Jace Lasek and Olga Goreas of the Besnard Lakes teamed up with Young Galaxy’s Stephen Ramsay to do something a little different — an ambient project called Light Conductor, the self-proclaimed “best band in the world,” and that note in their POP bio constitutes their entire existence online. The casual cosiness of Breakglass Studios provided the right kind of atmosphere to soak in their gradual rise and shine. The trio stood huddled around keyboards and mixers as the small audience sat on the floor, some with eyes closed in full meditative mode. The way that melody and walls of sound crept into the set (one long track that lasted over a half hour) spoke to their band members’ backgrounds in heavy shoegaze and synth-pop bands, while the expert sonic manipulation reminded us that they’re producers, too. (LC) 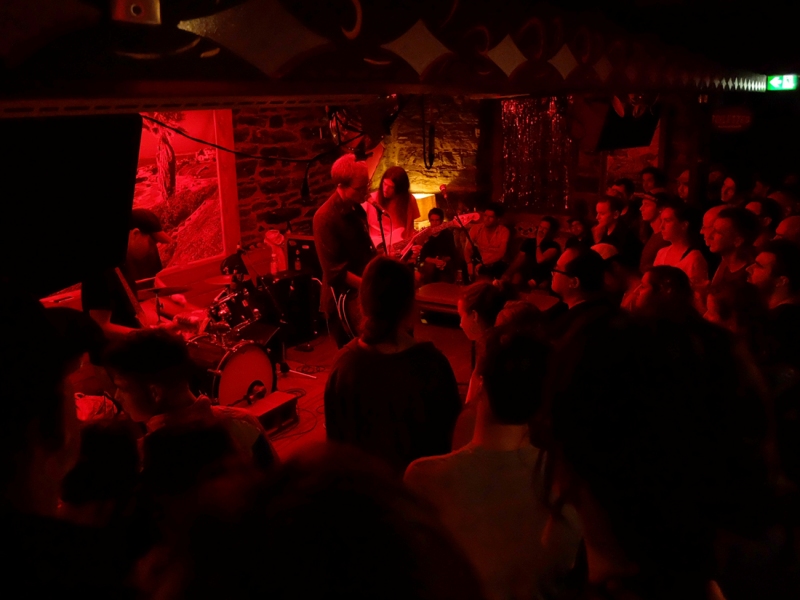 In interviews, you can tell the members of Nap Eyes are uncomfortable with critics’ incessant attempts to keep the group in the shadow of their influences. This may be fodder for an artistic crisis, but what concertgoer doesn’t want to see a 2018 Velvet Underground or Pavement? With apologies to the band, who played l’Esco on Friday, the Halifax/Montreal based group channelled these canonical artists; that is to say more precisely that they were really good — and really fucking cool — without trying. The intimate set was chill but propulsive, fitting for the band’s introspective, often anxious songs. Frontman Nigel Chapman was charmingly awkward, apologizing for his lack of showmanship but explaining to the packed venue that it’s better for us to know who he really is, anyway. (BK)

Pottery have only been together for a year but their set at l’Escogriffe was one of the tightest I saw at the festival. Countless upcoming acts have, one might say at first, a similar sound: heavy distortion, danceable Peter Hook-inspired basslines, some traces of noise rock etc. But the Montreal band set themselves apart Friday with amazing chemistry, and by striking that tough balance between being laid-back and showing off how clearly talented they all are. (BK)

The occasional side-project of Paul Murphy (Wintersleep), POSTDATA’s POP Montreal set (Sept. 27 at O Patro Vys) featured a ton of material off Let’s Be Wilderness (2018), a challenging and thoughtful record whose various earworms (“Black Cloud” will most likely get lodged in your head) may overshadow how complete the offering is — both on record and in person. Fronting a three-piece, Murphy was energetic and on point; his voice probing and plaintive; his narratives never missing the mark. POSTDATA songs are often about searching and questioning. As such, one left the venue with a wandering, corkscrewing mind. Maybe that was the point. (DJ) 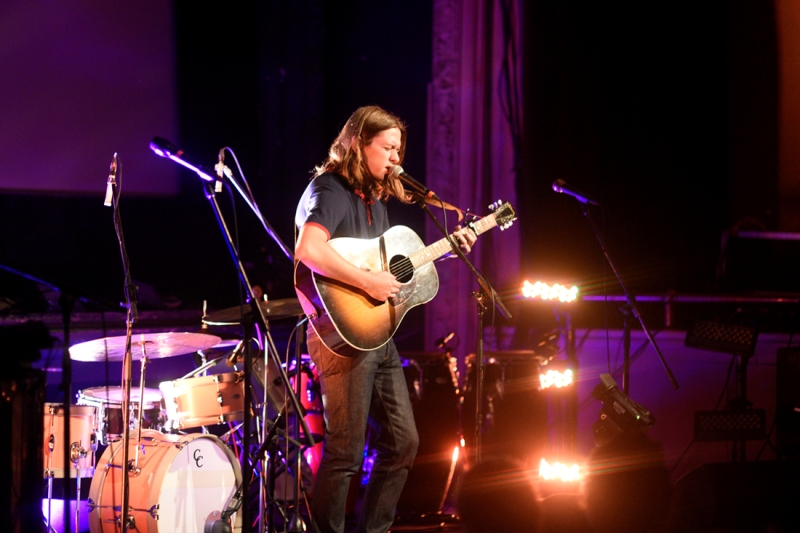 Cinema l’Amour can be an uncomfortable venue at times but it certainly has its perks. The 103-year-old theatre has surprisingly spectacular acoustics. This worked in particular favour for Jonathan Rice, whose witty yet straight-forward lyrics are an integral part of his craft. There is a certain simplicity in his call-back to the heartland rock of the ’80s, his “everyday man” approach reminiscent of the blue collar America aesthetic of Springsteen and Mellencamp.

Outside of his songs, Rice also presented his whimsical sense of humour via offerings from his “dystopian haiku” book. The poems offered Rice’s satirical stance on a number of societal issues, namely ones created by social media. (MW) 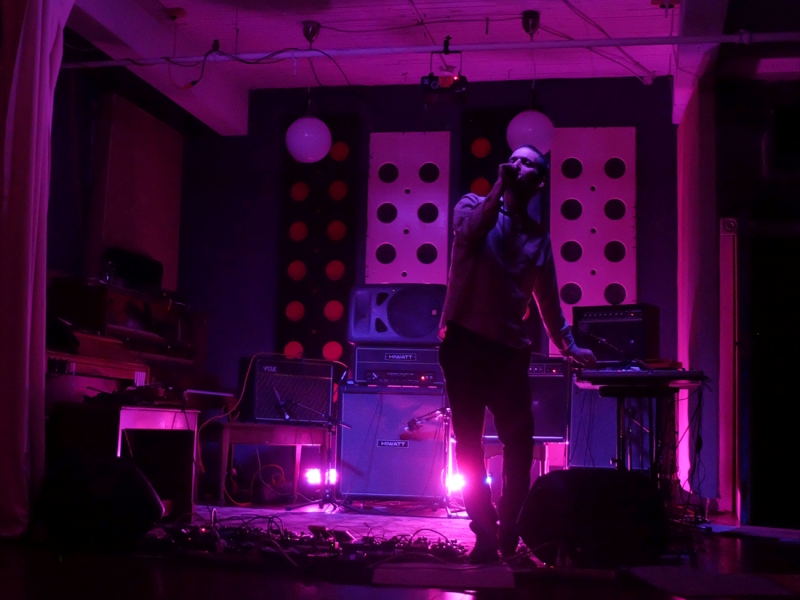 Shemie and Moss played separate sets that overlapped for a pretty long time as Moss recorded her samples and adjusted effects pedals, and the result was mesmerizing. During his set, Shemie (the singer for Sunns) layered feedback by holding the mic up to a succession of amps that were stacked on stage, adding the evening’s most conventional music moments with some emotive verses and dropping some beats. Moss’s pile of violin samples created a moody sound and hypnotic show that could’ve gone on a lot longer than it did — it was already over a half hour but an encore would’ve been sweet. (LC)

With two-grrrl harmonies, guitar textures and hooks heavily reminiscent of the grunge/shoegazing-adjacent alt rock scene that flourished two decades ago, Silver Dapple are pretty easy to like for those who were there as well as those who weren’t (nostalgia and rampant ’90s revivalism being equal motivators, presumably). The enthusiasm of the mixed demographic assembled at the Rialto on Wednesday proved how compelling the Montreal band’s velvet boxing glove sound is. Their live show isn’t particularly theatrical but their passion for the music shines through enough to make you care, even when they’re an opening act (for Bush Tetras, alongside the American Devices) playing to a fairly thin crowd. (LC)

With Toronto’s oversaturated hip hop market, it has become increasingly difficult for emerging artists to make a lasting impact. It doesn’t help that the scene is known for being an absolute boys’ club, both on the artist and industry sides.

Sydanie moves to the beat of a different drum. She is far more experimental than most, incorporating everything from ambient to Caribbean-inspired sounds to emphasize her uniqueness. Her lyrical content is often rather serious, though she managed to keep it light live for the most part. The performance was a beautiful case of POP Montreal’s discovery aspect working in favour of the artist, with the relatively unknown Sydanie easily winning over the crowd. (MW) 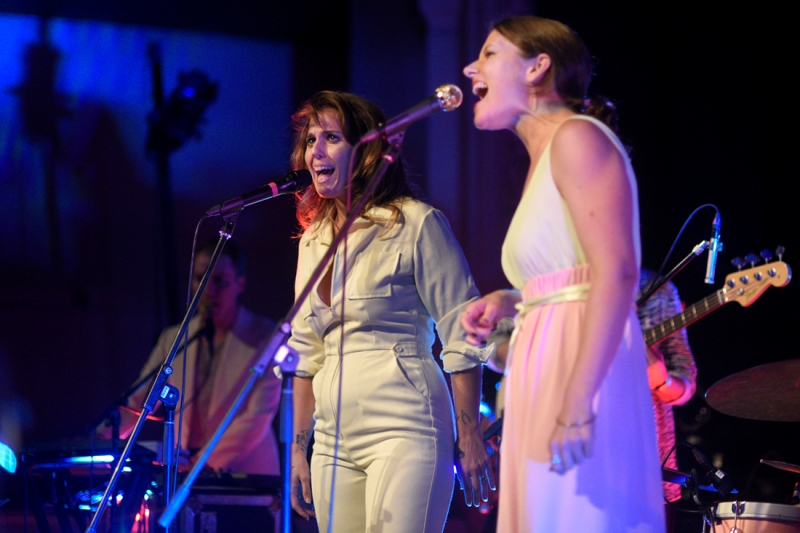 U.S. Girls’ third visit to Montreal within a year felt like a celebration of sorts. The band was returning for their first time since this year’s fantastic In a Poem Unlimited reached the Polaris Music Prize shortlist.

Meghan Remy’s gang of misfits are all incredible talents, who function swimming as a collective while also demonstrating a strong sense of individualism throughout their performance. Every artist is in their zone, without ever getting out of sync. The often chaotic horns and percussion are reminecest of David Bowie’s swan song, Blackstar. Everyone was on their feet throughout the entire show, though it wasn’t entirely clear whether this was because of the music, or the fear of adult cinema seat germs… (MW)