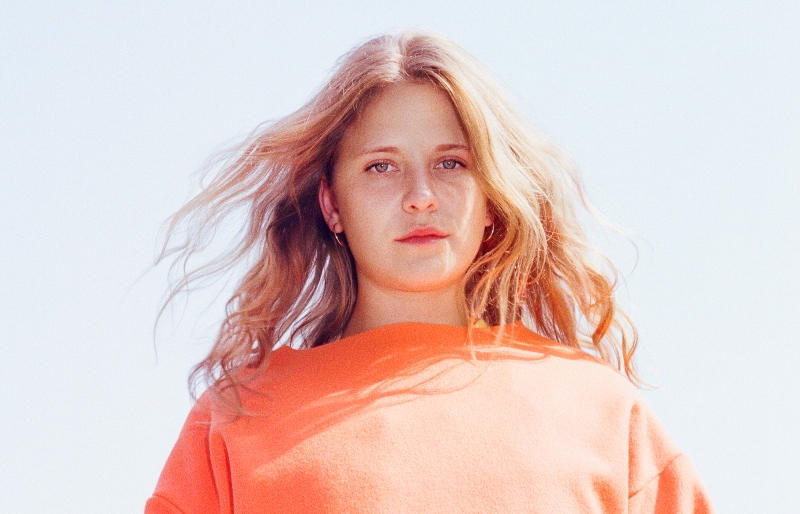 Helena Deland’s music career has been a creeper, and that’s just the way she likes it.

Her spellbinding voice is the centrepiece of her music, a rich and diverse sonic world that reveals itself further with the release of the EP From the Series of Songs “Altogether Unaccompanied” Vol. I & II on a new label called Luminielle Records, a joint venture between Fat Possum Records and the blog Gorilla vs. Bear. Deland began attracting attention in 2016 with her Drawing Room EP, an independent release recorded and mixed by fellow Montreal musician Jesse MacCormack. Earlier that year, she’d begun singing during open mic at Mile End’s Dépanneur Café, easing into a music project “malgré moi,” she says.

Deland sings in English but is fully bilingual, with an anglophone mother and francophone father. Now 26, she grew up in Quebec City and moved to Montreal six years ago “for school and music.”

“I wouldn’t really admit it at that point but I definitely had that plan and nothing else for quite a while,” Deland says. “It’s nice how it eventually just happened without my doing it very consciously.

“I have always played music here and participated in other projects and eventually recorded demos,” she explains. “I sang on a few songs by Men I Trust, that was one of my first studio experiences. I sang on a friend’s rap songs (laughs) and I had a few really goofy bands where I would play bass. Nothing really lasted, but it was just enough to keep me busy, for me to start taking it seriously.”

“To be honest, first came Avril Lavigne. That was in grade school, and then in high school it was Emily Haines, a female kind of mainstream rebel. Being a teenager is just a whole thing in itself, and I loved those particular artists with such passion that I sort of have to mention it.”

Deland grew up in a household with a constant soundtrack of her dad’s ’80s synth-pop and new wave her mom’s CBC Radio 2, where she discovered contemporary artists like Feist. “The Cure is what we’d listen to when we did clean-ups and had people over. Also Cocteau Twins and Leonard Cohen, which I used to think was so depressing!”

Deland’s lyrics are never trite, dotted with imagery that effortlessly evokes melancholy and heartache and strangeness. In her early songwriting exercises, the influence of a certain then-local artist cast a long shadow.

“The people I admire tend to have a way with words. In high school, I used to listen to Sunset Rubdown a lot and really liked how Spencer Krug wrote, so I’d borrow images from his songs and try to write text that felt as intense. I just wanted to write songs, and with adulthood, they actually started making sense.

“Recently I listened to the latest MGMT a bunch,” she adds, noting how her sources of inspiration vary and evolve, “and I find that super interesting because the themes are based around friendship and they seem very angry and hateful, which is unlike any synth-pop I’ve heard.”

Following the launch of her EP on March 2, Deland will be touring for the first time, hitting the SXSW music industry extravaganza in Texas and many other stops along the way, supporting Yumi Zouma and the Barr Brothers. Though she’s played Toronto and music showcases in Montreal, this is a big step for an artist who played her first proper gig (at Cagibi) as recently as October 2016.

“It was pretty tough,” says Deland, recalling that experience, “but I’ve always liked it. I used to think it was very sacred in a way but I guess that was because I hadn’t done it enough to be comfortable. I was so serious, almost ritualistic. It can be hard to open up in that way, live. I’m singing some pretty intimate songs, but you come to realize that you don’t put everything of yourself in the songs — it’s just a fragment of who you are and you’re not sacrificing anything by showing it.”

Deland began to really enjoy playing live last spring and values her precious time on and off stage with her three-piece backing band (who play drum pads, guitar, bass, synth and sequences), each of whom has their own music project.

“It’s a very exciting and heavy thing to work with,” she says. “Sometimes I feel like I’m taking up all their creative space when they have their own thing going on, so there’s a tension there, but they’re really inspiring, and so busy (laughs).”

On the progression of her own project, the Altogether Unaccompanied EP is a major move towards exposing people to her sound and exploring that sonic terrain herself before she embarks on an LP.

“[The EP] feels very eclectic for me right now. I come from an acoustic background but I’m listening to more and more electronic-based music and I’m kind of feeling my way through what I want to do. A debut album is this big deal, and I think you have to work your way towards that.” ■