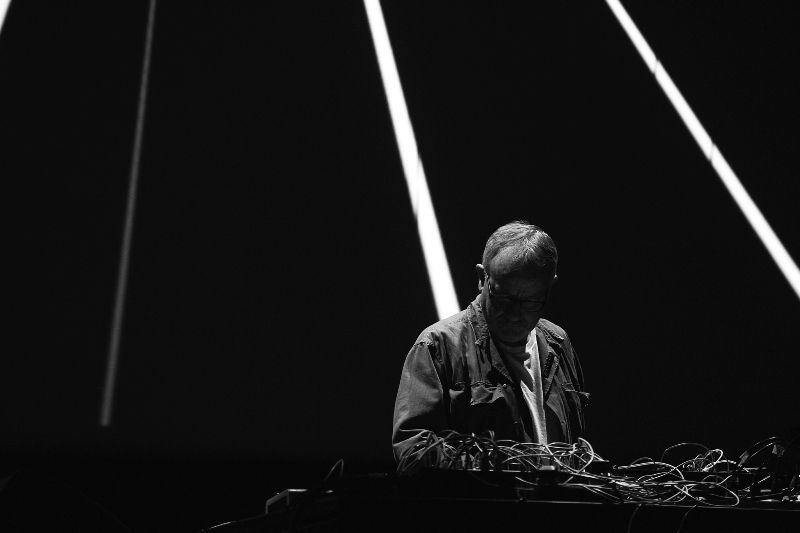 “I don’t really know where that comes from,” laughs the legendary experimental musician Drew McDowall, when I reveal that his Wikipedia page describes him as “notoriously reclusive.”

“Weirdly, that follows me around a bit. I may have been at one time, but I don’t know if that’s really so apt anymore.” He doesn’t sound particularly reclusive, a friendly, fading Scottish cadence echoing over the speakerphone from McDowall’s studio in New York. “Maybe there’s some truth to it. But I like people. I like going out. I did go through some long periods of being reclusive, but life’s too short.”

Drew McDowall has been performing for audiences more regularly in recent years, both with his newer solo material, as well as doing a string of live iterations of Coil’s Time Machines, their 1998 album with which he was integrally involved.

“I really didn’t enjoy playing live until a few years ago,” he admits. “I had really bad anxiety about performing, and I couldn’t get my head around why it would be an enjoyable experience. A friend more-or-less strong-armed me to play live in 2012, and I did it, and I enjoyed it. The key for me was just taking my ego out of the equation, and getting myself into the state of mind that it wasn’t about me. A performance is a shared experience. It’s not about my ego being up onstage; it’s about this shared, communal experience. What I try and achieve is kind of ritualistic. The audience is as important as the person who’s performing. When it works best, it’s a sacred experience. The best is when you don’t try, or even if you’re trying and failing. That’s part of it.”

I had the pleasure of seeing McDowall and video artist Florence To present Time Machines at the Unsound festival in Krakow in October. I tell him that it was so intensely visceral that I had to close my eyes at certain points during the show. “I think everyone who saw it at Unsound felt the same way,” he agrees. “I turned around at one point in the set, and it started to suck me in. I had to look away because I would just lose track of anything. It felt incredibly psychedelic in the true sense of the word. It’s one of those things that’s like a living entity with its own agenda and notions of what it wants to be, so I kind of tag along with it.”

After various informal collaborations, McDowall joined Coil — John Balance and Peter “Sleazy” Christopherson’s fabled musical partnership — as a permanent member in the early 1990s. “Time is such a weird thing,” he says as we attempt to establish the progression of events. Thankfully, McDowall doesn’t mind indulging me with a bit of history. Coil were perhaps the quintessential cult band, releasing an extraordinarily diverse but always esoteric body of work over a quarter of a century. McDowall’s participation ended around 2002, Balance died in 2004, and Christopherson passed away in 2010, leaving their oeuvre somewhat up in the air.

Since then, Coil have achieved increasingly mythic levels of reverence, fuelled in part through social media, and the scarcity of their recordings, which were often put out in limited runs, and are only now being reissued. “Back then, when we were releasing records, it felt like we were toiling in complete obscurity,” says McDowall. “We were just putting them out because we felt like it’s what we needed to do.”

I ask how he feels about the general turn today toward cultural commemoration, and Coil’s unlikely explosion in popularity: their original releases now sell for often extraordinary sums through online marketplaces like eBay and Discogs.

“Who doesn’t want to be appreciated for what they do?” McDowall muses. “In that respect, this kind of retrospective appreciation and attention is completely edifying. In terms of people spending an insane amount of money on a rarity, I get it. I would do it as well if it were someone I loved. Because Sleazy and Balance are no longer with us, there’s no one to make a definitive statement and say this is what Coil are or were about. They’re the only people that would be able to do that. It does create a wide-open space for interpretation.”

Few bands aside from Coil have as fine a point when a significant aesthetic change in their style occurs — specifically, right in the middle of the 1994 Born Again Pagans EP. Until then, Balance and Christopherson had ostensibly been refining a deeply experimental but danceable brand of industrial techno, culminating in the acid house-inflected Love’s Secret Domain, released in 1992.

Billed as Coil vs. ELpH, however, Pagans opens with a track called “Protection,” a blissfully ravey techno anthem, and immediately stretches out into celestial time. Its remaining three songs are beat-free, glacial drones, simultaneously melancholy and terrifying; soundscapes that wouldn’t be out of place on a David Lynch film score. This fissure characterizes Coil’s creative restlessness, spurred in no small measure by McDowall’s connection. He would indelibly shape such remarkable subsequent records as Worship the Glitch, Black Light District and of course Time Machines.

“Balance and Sleazy, I think they felt they had taken that previous idiom or style or whatever you want to call it — they’d taken it as far as they wanted to,” he explains of the shift. “That was one of the reasons they asked me to join, just based on our discussions, and our mutual love for certain types of music. It was something that they felt would be a useful addition. I loved Coil. Horse Rotorvator is still one of my favourite records of all time. But they’d done that. The drone component was something that the three of us really loved — La Monte Young, people like that. It doesn’t get enough credit, but Nurse With Wound’s Soliloquy for Lilith is still one of the best drone albums of all time. I don’t think anyone ever picked up on it, or made the connection between that record and anything we did, but it was a strong influence — an influence in the sense that it’s a beautiful template for how little you can do and it still remains valid; how much you can take away from structure and form, and it still stands up as a musical piece.”

There is something about McDowall’s work — with Coil and on his own records like 2015’s Unnatural Channel, and this year’s The Third Helix — that inspires an almost obsessive level of devotion from listeners.

“I love obsession,” confesses McDowall. “I think it’s one of those things that gives life. Especially the way we live now — on a mediated, level plane — something that inspires that level of obsession is a gas to me. Also, it was always about more than just the music, there was always something else going on: the ritualistic aspects, and the interest in other non-musical forms of expression. I think that’s where the seeds of obsession — the tendrils of obsession — get into people’s psyche. And I always like when that something else is unquantifiable, when it’s not super explicit, you just know that there’s something else going on. I like that because people’s imagination can kick in.” ■

The album is out today on the Montreal artist’s own imprint, Born Twice.