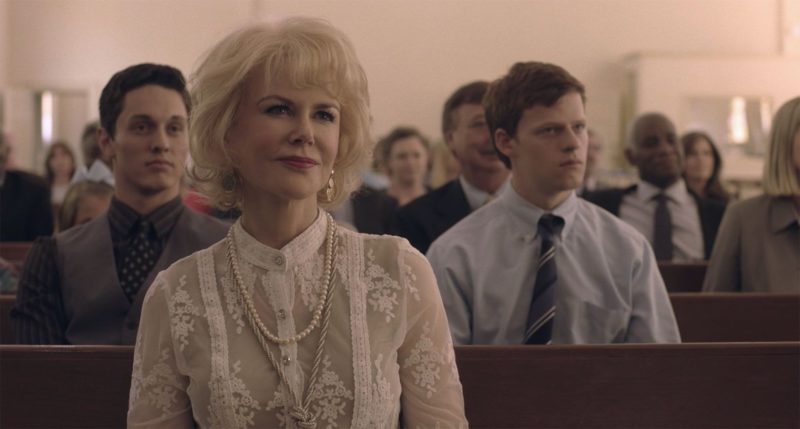 Joel Edgerton’s directorial debut, The Gift, was kind of a surprise. (Vague spoilers for The Gift ahead.) Under the guise of a queasily comedic riff on the Single White Female stalker thriller, Edgerton actually wound up exploring ideas of homophobia and bullying in a way that was somehow crass and on the nose, but also surprisingly effective. The Gift functioned under the guise that approaching something honestly can sometimes be ugly and unwieldy, and while that certainly clashed with its fairly straight-forward thriller elements, it made the film somewhat memorable.That sort of warts-and-all immediacy is sorely lacking from his follow-up directorial effort, another exploration of homophobia and homosexuality that’s significantly more “polite” and “measured” and a good deal more lifeless.

I don’t know anything about Edgerton’s life and the elements that make it “okay” for him to tell this story or not. Ultimately, I don’t think it particularly matters what Edgerton’s sexual orientation is, but there’s a sense in the final product that he sees homosexuality as a kind of noble curse. In telling the story of conversion therapy and the hypocrisy of the Church when it comes to “curing” homosexuality, Edgerton of course tackles the idea that homosexuality isn’t a choice. That much is clear. But every gay guy in Boy Erased is burdened by his homosexuality — every one of them is a martyr to some extent, which certainly helps draw the religious parallels but also gives the movie an old-fashioned, out-of-touch bent. There is exactly one moment of tenderness between two men in Boy Erased; it lasts a few seconds at most, at least six times shorter than a brutal rape scene.

Maybe I’m seeing this wrong; maybe all of this is in Garrard Conley’s book, which chronicles his own experience as a devout Baptist college student sent to gay conversion camp by his religious parents. Jared (Lucas Hedges) grows up with a minister father (Russell Crowe) and overprotective Southern mama (Nicole Kidman) in the South. His life, defined by sports, church and friends, is about as uneventful as it gets.

Jared knows, however, that there’s something he can’t be open about. He knows it when his girlfriend (Madelyn Cline) tries to go further with him, and he certainly knows it when he goes away to college and starts a friendship with a boy named Henry (Joe Alwyn) who rapes him one night. On a visit home from college, Jared learns that Henry has outed him to his family, playing the event off as consensual. The revelation causes Jared’s burly, emotionally repressed father to send him to a gay conversion camp — which Jared, confused and traumatized, agrees to.

There’s something inherently fascinating about conversion therapy, at least from the outside. It strikes me, a straight cis man who grew up essentially atheist, as the world’s most obvious con, an elaborate way to deflect your own self-hatred onto someone else and make money off it. As is usually the case, the camp in the film is run by an “ex-gay” therapist named Victor Sykes (Edgerton) who runs his camp with the utmost conviction that not only can he cure homosexuality, he can very easily trace the genesis of this “disorder.” (In a pre-credits title card, we learn that the real guy the character is based on now lives with his husband — of course.)

It’s clear that Edgerton is also coming to it from the outside, and his approach remains maddeningly one-sided when it comes to the push-and-pull relationship between Jared and the camp. It’s not like I’m advocating for a more measured depiction of what is ultimately a fucked-up barbaric practice, but Boy Erased keeps the sexual aspects of sexual orientation at such an arm’s length that a lot of the movie becomes interchangeable with any other kind of harrowing semi-consensual therapy. Jared could’ve ended up in inpatient rehab and so much of Boy Erased would essentially be the same. I wasn’t a huge fan of this year’s other conversion therapy film The Miseducation of Cameron Post (for entirely different reasons, mind you) but at least that one presented a more nuanced relationship between its protagonist and the camp.

One of the film’s recurring motifs is the idea that Jared is drawn to sticking his arm out the window and “making waves” whenever his mother is driving. His mother, being an overprotective Southern type with a love for purple velour tracksuits, thinks he’s going to lose his arm this way. It’s a clunky metaphor for repression, partly because, as a visual cue, it’s been overused by iTunes commercials and other things designed to sell you photo retouching software. It only gets clunkier when Jared, freed from the clutches of repression, is finally allowed to stick his hand out the window and make waves as he well pleases. The treatment of this thoroughly corny metaphor encompasses Boy Erased’s good-intentioned misfire: just because you get it and we get it and everyone is on the same page about it doesn’t mean you’re actually getting at any truth.

Boy Erased is at its best when it takes the road less travelled. The relationship between Lucas and his parents is drawn with a surprising amount of clarity and contradiction, meaning that his parents (as intolerant and confused as they are) aren’t drawn as cartoonishly Bible-thumping caricatures. In the film’s best scene, Jared is forced by Sykes to “confront his demons” in front of the rest of the group (which includes Xavier Dolan and Troye Sivan in small roles), which he doesn’t exactly take to. Sykes continues to taunt and prod him, asking him to tell his father that he hates him. Jared instead storms out, saying that he actually doesn’t hate his father, ultimately defusing this umpteenth journey into well-trod territory. Details like that prevent the film from becoming just caricatural misery porn — but the fact is that Edgerton has a hard time really digging into the subject matter. It feels pitched from the outside looking in, boxed in by limitations that no amount of empathy can knock down. ■