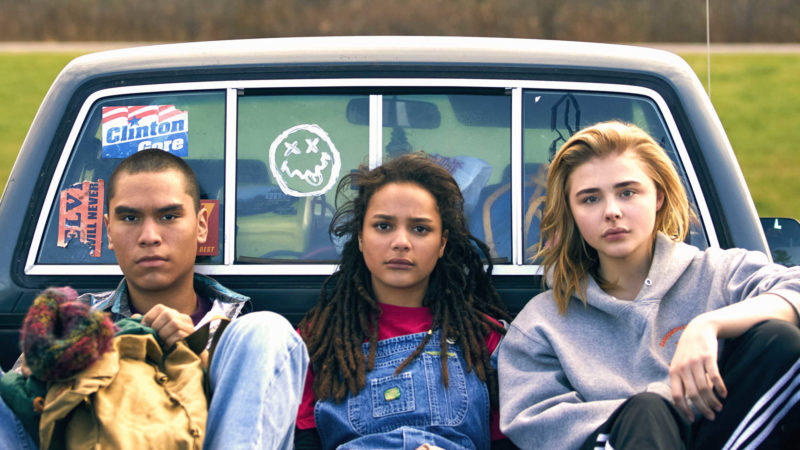 A lot of people my age first learned of gay conversion camps through Jamie Babbitt’s 1999 satire But I’m a Cheerleader…; some significantly less lucky people my age learned by experience. Babbitt’s film employed broad, candy-coloured satire and, although I saw it an age where I had very little experience with sexuality of any kind (and, truth be told, one where I definitely used “gay” as a catch-all insult), it imprinted on me this idea of a gay conversion therapy camp as a fundamentally ridiculous idea. The camp in Babbitt’s film is an all-American nightmare scenario that always cast this idea as something that, while definitely possible, was thoroughly improbable. It’s doubly strange that Babbitt’s film did not come on the heels of a more dramatic film about the same subject; for many people who were just like me, it was the only depiction they’d ever seen of conversion therapy.

It’s both interesting and a little bit of a cop-out, then, that Desirée Akhavan’s The Miseducation of Cameron Post is set in 1993. (I’m aware that that’s also when the book was set, but there’s a whole different aesthetic when you put the 90s on film.) The film’s retro setting makes it feel like conversion therapy is a thing of the past, rooted in thoroughly passé signifiers like getting a Breeders tape through the Columbia House catalogue. The film has a distinct — if perhaps unintentional — feel of “this is the way things used to be” that certainly does a disservice to the fact that kids are still, to this day, being forced into these conversion camps. On the other hand, the film is told with enough subtlety and even-handedness that the film’s artificially retro setting doesn’t ultimately matter that much.

Cameron Post (Chloé Grace Moretz) has lived with her pious aunt Ruth (Kerry Butler) since the death of her parents, years ago. Cameron lives a fairly normal teenage life, even if her aunt is severely critical of any non-religious activities: she goes to school, has good grades, friends, a boyfriend… But Cameron also entertains a flirtation with prom queen Coley (Quinn Shephard) that soon evolves into a full-blown sexual relationship — one that’s discovered on prom night by her flummoxed boyfriend. Soon after, Cameron is sent to God’s Promise, a rural treatment centre that’s designed to “cure” teenagers of their homosexuality. The camp is run by ex-gay pastor Reverend Rick (John Gallagher Jr.) and his sister Dr. Lydia March (Jennifer Ehle), a psychologist who insists that homosexuality is curable. Cameron falls in with the “rebel” kids in the camp (Sasha Lane and Forrest Goodluck), going on long “nature hikes” to smoke weed in the hills and plot her escape.

The more sensationalistic way of treating this story is to approach it as an institutional drama — either something like Girl, Interrupted or a straight-up prison movie. Everything is there to draw maximum drama and pathos out of what is a truly horrible situation, but Akhavan chooses instead to treat it like a teenage story. Like all teenagers, Cameron and the other kids are trapped; trapped by choices their parents make for them, trapped within their own bodies, trapped within their own sexual identities, and trapped within the very real confines of God’s Promise. Instead of making their stay torturous, Akhavan makes it what it almost certainly is, minute to minute: monotonous.

That’s not to say that the film is monotonous. The characters are well-drawn enough and the film dynamic enough to bring depth to the proceedings, and the exploration of the hypocrisy of the camps is justification enough for an entire movie. (It’s suggested that Rick was “saved”  by a couple of disciples from his church who just so happened to drive by a gay bar and spot his car. They rushed in to “save him,” which in turn became his sister’s impetus for starting the camp. Everything in this movie essentially revolves around one man’s refusal to face the consequences of his actions.) But the film is alternately compelling and frustratingly slight, an unbelievably thorny subject given the Sundance-lite treatment. (It won’t surprise you to learn it won the Grand Jury prize at that very festival.)

It’s rare that a single scene can really knock a movie down in my esteem, but The Miseducation of Cameron Post has exactly that. As the teens are tasked with baking bread or something to that effect, 4 Non Blondes’ “What’s Up” comes on the radio. Cameron is immediately invigorated by this extremely annoying one-hit-wonder karaoke nightmare and jumps up on the table, singing along into a wooden spoon, until she is eventually caught by Dr. March. It’s a real iPod commercial of a scene, a bit of triumphant hair-in-the-wind bullshit in a movie that absolutely doesn’t need it. I’m all for tempering the monotony and heaviness of conversion therapy, but the scene rings so false and comes across as so sweaty that it completely undermines the rest of the film. (To be fair, I’m also horrified that that song has come full circle and now represents convenient shorthand for mid-’90s freedom and emancipation — but what can you do?)

There have been several films about conversion therapy since But I’m a Cheerleader… Speaking about it has become less of a taboo, even if it continues to be a problem across North America and even the world. I’m all for movies about this kind of thing exposing the evil that they represent — but there are so many ways to do it, and this kind of Sundance hopeful, semi-twee dramedy might work on some people, but it doesn’t really work on me. ■

The Miseducation of Cameron Post opens in theatres on Friday, Aug. 10. Watch the trailer here: