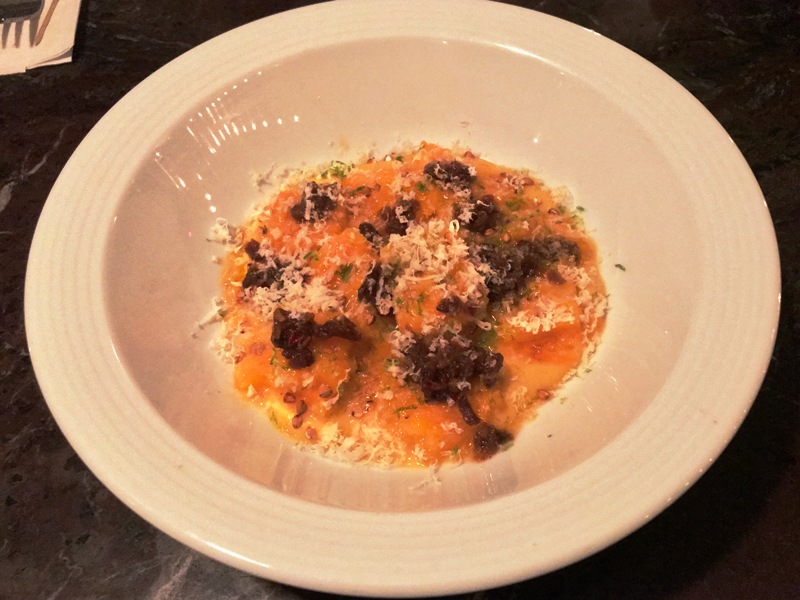 Squash with xo sauce and horseradish

The bistro’s a time-honoured art form unto itself. A step up from the café, and not taken quite so seriously as a full-blown restaurant, it’s a kind of eatery that exists somewhere in between. Bistros pride themselves in providing a soigné experience with less formality, without being too informal — don’t expect a racked-up bill or a long meal. They are seldom tourist destinations, attracting more neighbourhood locals for clientele. I find it’s not in the history and aesthetic of Old Montreal that the city is at its most European, it’s in the bistros where we while away our time. 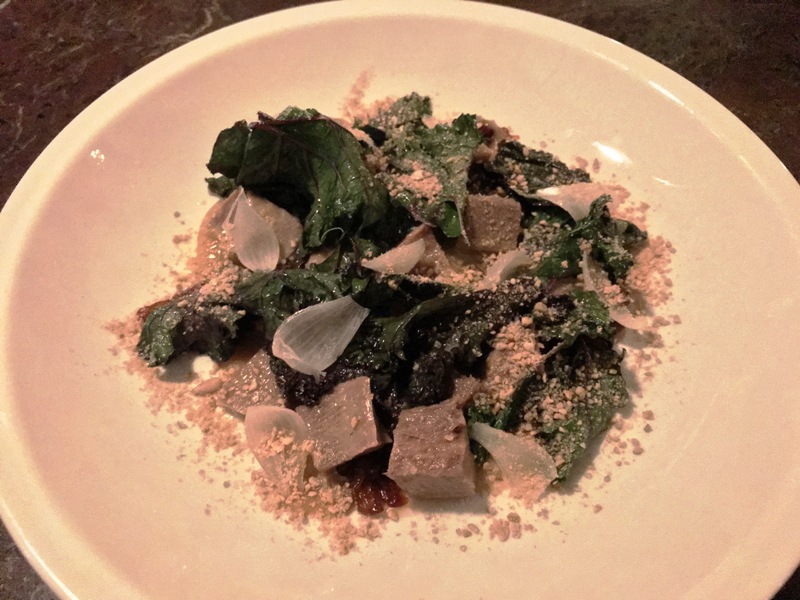 I find these qualities in Boxermans, one of the newer bistros in town. Though its owners Eric Berlin and Jade Fortin Côté employed Kyle Adams Goforth for a design both sleek and plush, there aren’t any pretensions here. I suppose someone could call it “hip” or “cool,” but really, I’m finding that the kind of attention to detail Boxermans exhibits is more par for the course than anything: muted vanity lighting on hardwood, a hammered tin ceiling, a marble banquette with bankers’ lights, and — I can’t stress it enough — comfortable seating. If I had an address in Outremont, I’d be there for any after-work coffee or snacks by evening, leading into wine and dinner by night — that is, if you can snag seats. Reservations can be hard to come by, but I’d managed to settle in on a late fall night with cold and drizzling rain with service just beginning. 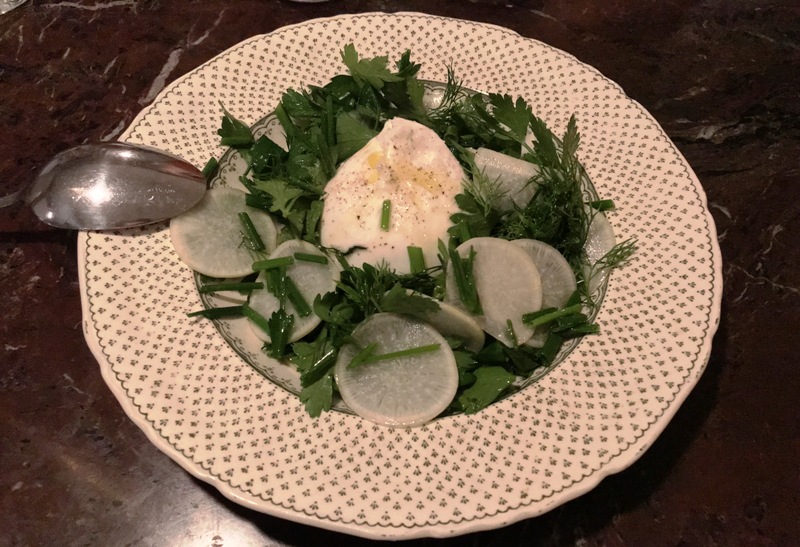 Times have changed for Boxermans, as its first chef Sean Murray-Smith has gone on to focus on operations at his restaurant Île Flottante. Now employing Grégoire Routy in the kitchen (formerly of Hotel Herman and Marconi), Boxermans has stopped its day services to focus on nights. A major shift in gears for the restaurant side of Boxermans, that could only mean that more attention was being paid towards the food, so it felt right to pay a visit. 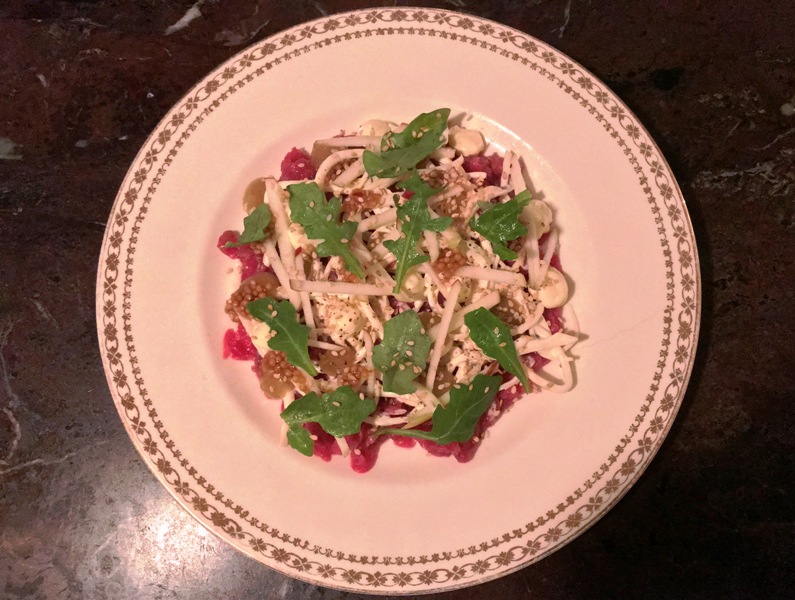 As important as food can be in a place like Boxermans, the drinks form half the experience here. Côté’s wine curation is worthy of a few tastes, and servers do a fine job of pairing them up with the kitchen’s latest developments, and the bartending here is just as on point. It’s worth noting that cocktails here don’t push the fold as far as some other mixology-driven joints can go in Montreal, favouring precision with more classic drinks. Needing a bit of hair of the dog during that dark autumn evening, I can at least attest to their Caesars to prop me up. The food handled the rest. 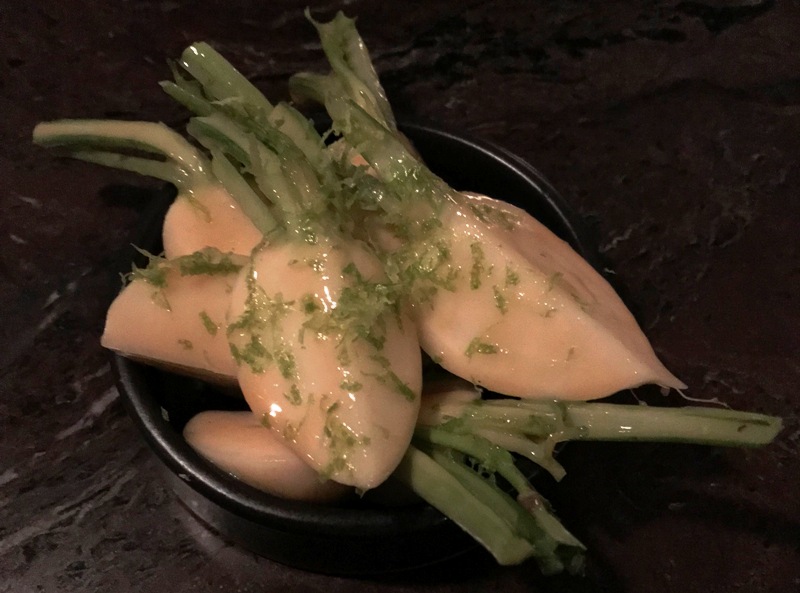 As Murray-Smith went with more perennial dishes to match the all-day services of Boxermans’ first menus — think easily recognizable and humbling plates like sandwiches or schnitzel — Routy’s evening services have opted for a more challenging array of flavours. I was told by Berlin that the selection of dishes moves with the seasons, and that’s what I found most clearly in two particular plates. The first was squash dressed in xo sauce and horseradish splayed like parmesan shavings ($15). The presentation here was a little arresting at first, with no textures immediately apparent, but still an attractive colour, and that’s where the invitation to taste comes in many of this chef’s plates. The squash was served both firm and puréed, with the xo leaving a rich and salty mark of seafood with the right amount of spice. As for the second, veal tongue served in fried kale and cipollini onions ($16), I’ve got to commend the kitchen for the texture and flavour of the offal. Some might be turned off by the mixing of grey organ meat with dark leafy greens, and it can be a difficult ingredient to lighten up. 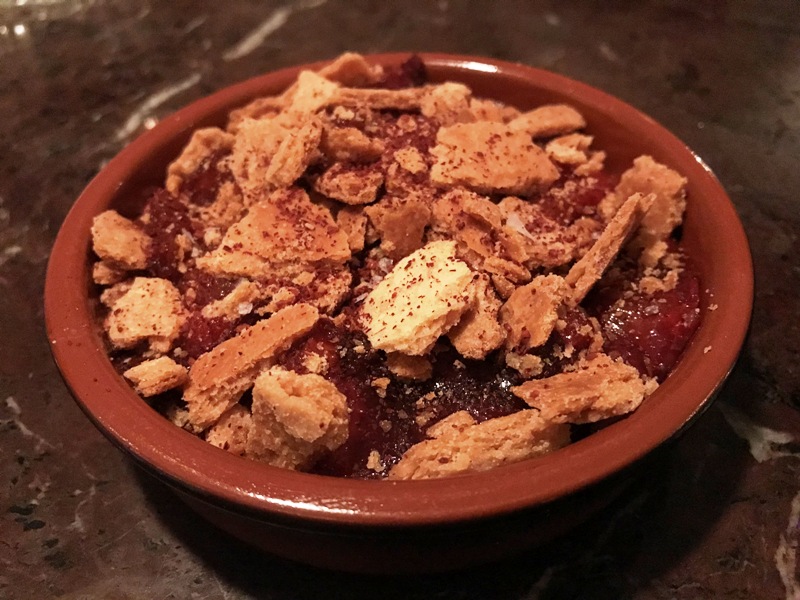 This isn’t to say that Routy doesn’t make room for classic dishes of his own, as some nods to Italy were included on the menu, namely burrata ($17) and beef carpaccio ($19). The first came with coarse choppings of dill, chives and flat-leaf parsley and slices of daikon for a juicy crunch, and while I would’ve preferred more finely minced herbs to match the smooth qualities of the cheese, it made for fine salad. The carpaccio too was about as roughly cut as the burrata’s herbs, but benefitted from it more, with ribbons of beef dressed in flints of white radish for spice, zested mayo and leaves of arugula for pepper. Above all, the table by consensus was unsurprisingly most happy with dessert—a white ganache with a nut and pastry crumble ($9) and a take on brown betty with sour prunes and shortbread ($10) — as they offered a yin and yang of sweet and tangy while being light and simple. 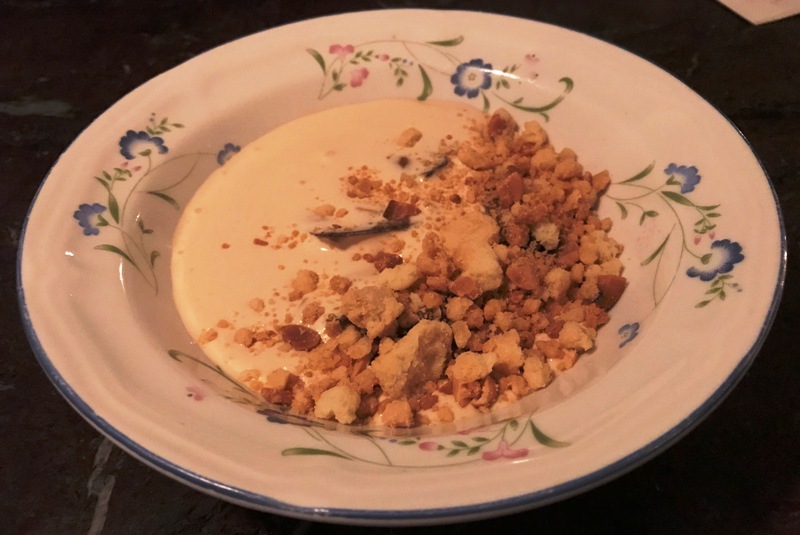 White ganache with a nut and pastry crumble

I can appreciate how a bistro doesn’t exactly set out to wow the crowds, but that doesn’t mean they don’t seek to please. Berlin and Fortin Côté have done something special here, and the work of Routy is only building on that. The Boxermans of today isn’t the same as it was before, but that effort to keep it fresh is the beauty of this place. ■