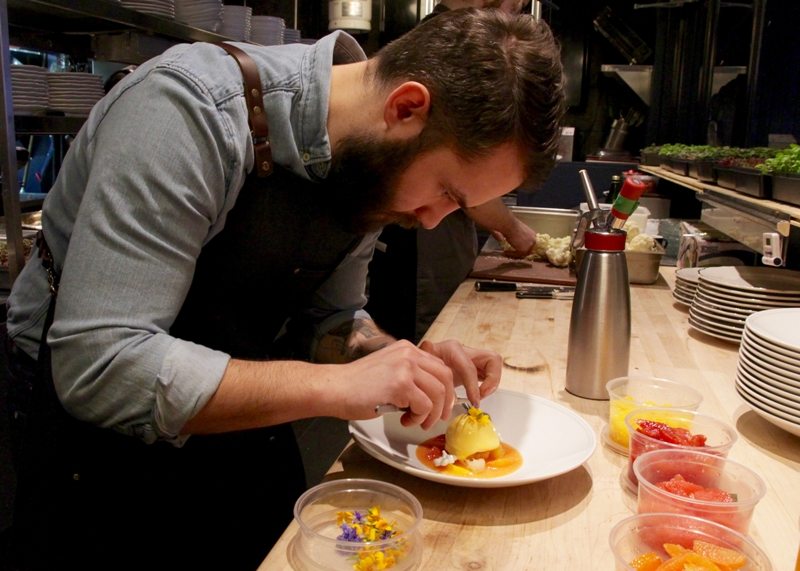 Vice’s Oobah Butler and his Shed at Dulwich have gained a lot of notoriety over the last couple of months for his scathing mockery of TripAdvisor and the undeserved hype generated around a restaurant’s exclusivity. It’s thrown the reliability of the website into the shitter for some, while others are taking a told-you-so stance.

Does Montreal have a similar story with Île Flottante, the restaurant formerly known as les Deux Singes de Montarvie? You could be suspicious: In 2013, the eatery and its French-leaning cuisine went from a loyal neighbourhood fanbase and a far lower ranking to being one #1 on TripAdvisor and being booked to Joe Beef levels. It’s been that way ever since.

Rest assured, owners Nada Abou Younes and chef Sean Murray Smith’s establishment is leagues above serving readymade meals as fine cuisine and offering service that’s a few shades shy of an art student’s needlessly obscure art installation. If anything, the restaurant’s glowing reception from the public online isn’t entirely dissimilar from the arguments that followed the release of Batman vs. Superman: the critics are not so impressed, and your “average” fans are bowled over by their experiences. That said, I took a trip to the restaurant to hear their story and set the record straight. 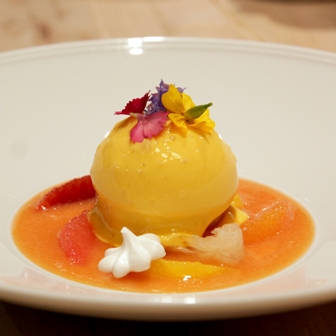 In a world still realizing its mistakes in primarily venerating male chefs (this writer included), I learned that Î-F began with Younes and her youthful aspirations. “I wanted to be a chef when I was younger. I’m Lebanese, and in my culture my father didn’t agree with me being in a kitchen,” she explains. “I wanted to go into cooking school, maybe own my own restaurant, but it was a repressed dream.”

Les Deux Singes was the first restaurant she’d ever worked in — she was a banker before — and she fell in love with it. So much so that, despite not knowing everything the move could entail, she assumed ownership with the help of her father in 2011.

At first, the restaurant struggled. The then-23-year-old Smith, tired of giving supper clubs 85 to 100 of his weekly waking hours, had shown up one afternoon to drop off a CV. He was hired an hour later, initially as a cook, then as a chef. “At first, there wasn’t really any clientele. There was a lull period where people weren’t coming,” Smith explains. “Sometimes we’d do two people on a Saturday night.”

What was it that made her want to hire Smith? “It was his creativity. He knew he wasn’t going to make as much, but he asked me for complete creative freedom,” Younes recalls. “His dishes were wonderful, and had started to become the stars of the menu, little by little.”

Her intuition and effort paid off: Initially joining Smith in the kitchen (she’s since stuck to managing the front of the house), les Deux Singes clawed its way into the top echelons of TripAdvisor, driving up reservations significantly. “It went from being a calm restaurant to being booked every other night. For me, it was a nice pat on the back,” Smith says. “It was years of work and having fun, putting my heart and soul into it, from washing dishes to making them… It was one of the first times I felt like I had my own place, and that kept the fire burning.”

Throughout all of this, Smith had another restaurant name in the back of his mind: Île Flottante. “I always hated the name of les Deux Singe de Montarvie — it was too long,” Smith explains. “People would like the food, the experience, and ask ‘Why the name?’ You’d have to explain this old story that’s not yours. We wanted to continue doing that, but with our own story.” 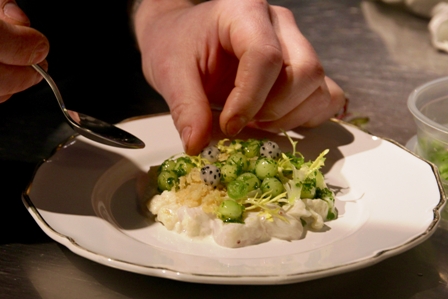 As much as that story began with Younes and her father, it also began in way with Smith and his. “He loved cooking and I remember his food as the best thing I ever ate,” Younes says. His father had worked on frigates on the St. Lawrence during Expo 67, and went on to work for Air Canada for 30 years, bringing back the keepsakes Smith has around the kitchen: a butcher’s block, spice containers from Finland, a first edition of Larousse Gastronomique, a mortar and pestle from South Africa.

“Whenever he talked about Montreal, he’d say it’s not the place it used to be,” Smith recalls. “In ’67, it was the emerald of the world… I have that romantic image of my father making it here back when he was my age.” The connections would seem frayed to an outsider, but to Smith, they were intimate: Montreal, the floating island, his father at the World Fair and the son finding his own footing in the same city. Smith hadn’t been the best student before coming here, and turned to cooking for comfort. “The only thing I was good at was art. That’s all I did,” he says. “I took those drawings and put that energy into my plates. That’s how I thrive.”

Younes and Smith took a chance to make a restaurant that was entirely their own, with a new menu, a new look, a new story to tell. When the owners changed the name, it was a matter of transferring their TripAdvisor account, ratings and all — Île Flottante is not a new operation through and through, after all.

As for those who doubt their success? It’s true, there are ways to game TripAdvisor, but Smith points out that you can tell if it’s bogus. A simple click on a reviewer’s profile reveals whether they’re a member of the community. Have they posted more than a few opinions, and are they varied? There’s talk of some restaurants playing with these services, even paying for them in Oobah’s case — the websites mostly looking the other way for the click-rate profit — but those efforts are farther and fewer between than the goodwill of the public. ■