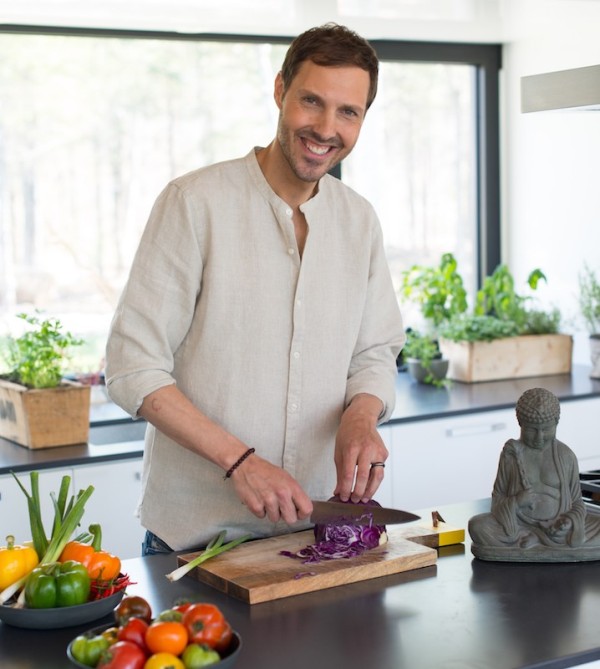 This Saturday and Sunday, the Montreal Vegan Festival is in town for its 5th edition and has moved from the Marché Bonsecours to a much larger venue, the Palais des Congrès. The expanded fest includes lectures and workshops, a party at the Centre des Sciences and a yogathon. Guest presenters include cookbook author/blogger Gaz Oakley, author Lori Gruen, Montreal SPCA director Élise Desaulniers, vegan athlete Elliot Cardin, and Milène Laoun of Sophie Sucrée among others.

We caught up with founder and president Alexandre Gagnon and this year’s spokesperson Jean-Philippe Cyr (aka the Buddhist chef) to discuss the 2018 edition and veganism today.

Rob Jennings: How has the Vegan Festival changed over the past few years?

Alexandre Gagnon: The mission hasn’t changed over the years but the popularity of the festival is growing and we had to move to a bigger venue this year. This year we have doubled the number of activities. We’re having an opening party on Friday, Oct. 19. We added workshops for the DIY enthusiasts. There are yogathons to raise funds for Refuge RR. The layout is different, easier to navigate.

RJ: When did you become a vegan and why?

AG: There are usually three reasons why people go vegan: health, animals and the environment.  I turned vegan to end my participation in animal exploitation in 1994. I was 22 at the time. It hasn’t been easy but I’m proud of my decision. Over the years I came to understand the devastating impact of animal exploitation on the environment as well. My health isn’t bad but I could lose a few pounds. I’m a bon vivant and my waistline is not the same as it was, but I’m pretty sure my cholesterol levels are A1.

Jean-Philippe Cyr: I’ve been vegan for five years now. I’m a classically trained chef. I was in charge of cooking meat in restaurants actually. I traveled throughout East Asia and fell in love with the Buddhist philosophy of non-violence. I came back and started attending meditation retreats and cooking at those, but I really went vegan one night when I was asked to cook lamb for 400 people for a banquet in a funeral home…it clicked. I made the connection between the plate and the animal. What shocked me was that most of the guests weren’t even finishing their plate. I realized that there was something very wrong about the way we treat animals, we see them as a dispensable product, like furniture. So I quit my job and became vegan. Another reason is the environment. 14.5 per cent of greenhouse gas emissions comes from meat and dairy production. Health is another good reason why people choose to go vegan, since it can reverse Type 2 diabetes, heart diseases, high blood pressure; it can also (help) prevent certain types of cancer.

AG: You don’t have to be a vegan to attend the festival. Everyone is welcome.

JPC: First of all, it’s free and there will be food. There will also be more than 150 exhibitors, talks, conferences about every aspect of veganism, workshops, culinary demonstrations by well-known chefs from all over the world.

RJ: Any recommendations for specific events?

AG: If you’re a foodie, make sure to attend a cooking demo and taste all the samples our exhibitors will hand out. If you’re interested in understanding the concept of veganism, there are many lectures helping understand the vegan phenomenon. You can also come and peruse the festival to see the variety of vegan products on the market presented by our exhibitors, be it food, cosmetics, clothing etc. If you’re a vegan wannabe, there will be lectures and workshops to help you make the transition and a book selection to satisfy your curiosity.

RJ: What do you think the value of the Vegan Festival is for Montreal?

AG: We noticed that more and more restaurants are having vegan options labeled as is on their menus. Vegan businesses are appearing at a rate we haven’t seen before. I guess it’s pretty safe to say that Montreal is the most vegan friendly city in the province of Québec and that the festival has a bit of influence on the people that come and visit. We like to think of the festival as a catalyst to social change towards a more peaceful, healthy, and greener lifestyle.

JPC: Presenting the biggest free vegan festival in Canada in Montreal is something worth talking about. It places Montreal at the head of the vegan movement alongside cities like San Francisco, Los Angeles and New York. ■