Turbo Haüs is reopening at a new location.

Apologies for the lack of a sexy lede, but Turbo Haüs is reopening — there’s no time for sexy, only celebration. Said celebration is slated for Sept. 1, when Turbo Haüs will formally reopen at its new location at 2040 St-Denis — a space which formerly housed Amarone.

For the uninitiated and/or those too young to have been there, Turbo Haüs grew out of the practice space of one of Montreal’s fiercest and most singular bands: Trigger Effect. Under the watchful eye of former Trigger Effect bassist Sergio Da Silva, among others, Turbo Haüs grew from a formidable DIY space to a full-fledged venue above Loïc in St-Henri to its present-day iteration, which is still under construction but promises to be a bar, a venue and much more.

The new spot has its roots in the past and its eye on the future. Former Trigger Effect members Mike Niro, Jordan Brown and Patrick Bennett are still in the fold as minority owners, but the main ownership stake rests with Da Silva, Daniel Matheson and Michelle Ayoub.

I recently chatted with Da Silva, Matheson and Ayoub about the undertaking.

Sergio Da Silva: I have no transferable skills. Outside of being in and around music, I have nothing to offer anybody. I’d been to all these places in Europe and I’d seen places like Kӧpi in Berlin and different squats in Slovenia and Austria and was like, “Holy fuck, these people are just doing things because they want to do them.” That’s sort of been the idea behind everything.

DJ: For the people who weren’t there: How did Turbo Haüs start and how did it evolve?

SDS: Turbo Haüs started in a jam space where we used to practise because we were sick of not having places to play. We would go on tour and it would be difficult to find places to play. We were like, “Can’t we just play in our rehearsal space? Invite 10 friends and just fuckin’ have a good time?” So we started doing that. That space got flooded and the landlord moved us upstairs. We were good tenants because [Trigger Effect drummer] Mike Niro was always good at paying the bills on time. He [the landlord] didn’t want to lose us, so we said, “Give us as big a space and we’ll pay the same amount of rent and let us have shows.” He said, “Yeah, fine, do whatever you want.” So we did that, and that took off really quick. When [Trigger Effect vocalist] Nick [Babeu] passed away we put everything on hold [before deciding] he’d still want us to do it, so we kept doing it there. Then we met some people and we moved to Turbo Haüs II (above Loïc), which was a super learning experience, because you’re jumping from a DIY space where your rent is being paid by people who are rehearsing there. Rent is [now] a substantial amount of money. You’ve got to pay the bills. You have to pay these employees. You’ve got to make sure everybody’s safe.

DJ: Why did you want the new Turbo Haüs to be where it is?

SDS: I wanted to go somewhere super central, where everybody could go to and have access to and get to it – you don’t have to take a metro and a bus and a metro. And I wanted to be on the first floor; I wanted to make it as accessible as I could in that way.

DJ: You’re not touring with bands anymore, right? Your job is this?

SDS: My job is this. And to open other things. At this point in my life, I feel like I can maybe do this for five, six years — just open places and see how that goes. 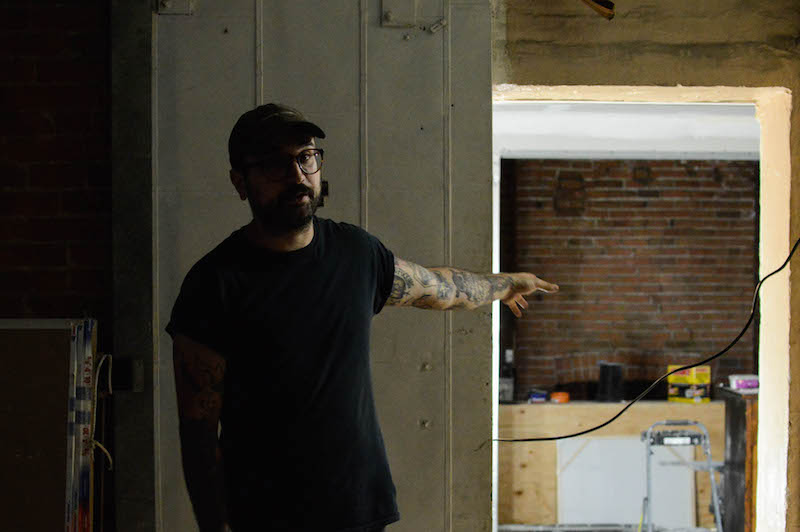 Turbo Haüs is reopening at a new location (Sergio Da Silva, seeing how it goes). Photo by Mackenzie Lad.

DJ: Dan, why did you want to open a venue?

Daniel Matheson: Michelle has been my friend for 10 years, since I moved to Montreal. Hearing that she was getting into this and needed partners, I figured I wanted to get in on that.

DJ: Have you ever owned a bar or venue before?

DJ: So this is a brand new thing for you. Are you excited or are you scared?

DM: Both. (Laughs) But I think more excited.

DJ: Sergio says he wants the new Turbo Haüs to be a great venue, a great bar, and generally a great space for the people in the neighbourhood — a place for the punks as well as the Cégep kids around the corner. What do you want this venue to be?

DM: Aside from the accessibility and gender-neutral bathrooms and all that good stuff I was definitely on board for, I want to use my tech knowledge for the benefit of this place by putting up some visual stuff.

SDS: (Screaming from a distance) Tell him about your light wall, Dan!

DM: We’re going to have this LED light wall that is programmable from an iPad. Bands can bring their logo and we can splash it up there, like “Turbo Haüs Presents…”

DJ: Michelle, your day job is working in production?

DJ: Have you ever owned a bar or venue before?

DJ: So is this more scary or more exciting?

DJ: This place isn’t going to be just one thing. Sergio has talked about it being a venue and a bar, but also a place for trivia nights, karaoke nights and just for the community. Do you have a particular vision for this?

MA: Community space kind of nails it in its simplicity. As much as we all have a certain look or aesthetic, in terms of musical taste and in terms of general taste we’re across the board, so it’s nice to have a spot where we can go across the board and have a metal show one night and an LGBT comedy night the next.

DJ: You’re putting a lot of love into this project. Why?

MA: Why not? There are so many venues disappearing, and it’s harder and harder for the little guy to put on shows or do events, so why not give back?

DJ: Sergio, what is it that you want this iteration of Turbo Haüs to be?

SDS: It always comes back to the squats I’ve seen in Europe. They’re places for artists to get together and exchange ideas and have fun and have a drink.

DJ: It seems like you want the place to have this notion of, “this is for everyone.” What is the ethos of this place?

SDS: This is an extension of my personality, and that’s a terrible idea. (Laughs) When you see me as a person, I’m usually pretty dour but when you get to know me, I’m kind of an idiot. I want you to feel like you can come in here and maybe be a little bit intimidated by the Turbo Haüs name, and be like, “Oh, it’s supposed to be this venue,” and then you show up and you’re like, “Oh, I can be a fuckin’ idiot here, and it’ll be fun, and I’ll have a good time, and I don’t have to know anybody here, I don’t need to know the city.”

DJ: There’s no secret handshake and you don’t have to have the right tattoo.

Turbo Haüs will formally reopen at its new location at 2040 St-Denis. Website

For our latest city coverage in Montreal, please also visit the City section.