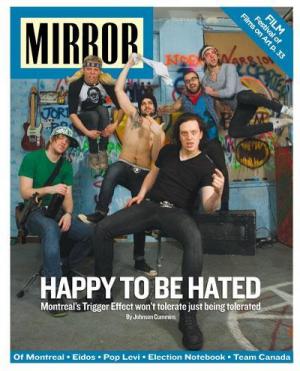 “Yesterday morning we lost our voice. Our singer, frontman and best friend Nick Babeu died an accidental death. We appreciate all of the kind words and actions we have heard and seen thus far. A memorial will be announced at Turbo Haus shortly. We love you Nick, thank you for the ringing in our ears and the love in our hearts.”

Babeu and his bandmates Patrick Bennett, Sergio Da Silva, Mike Niro and Jordan Brown formed Trigger Effect a decade ago and quickly established themselves as a punk-rock fixture, particularly in the West End and southwest, where they regularly played lofts and other underground show spaces. Just last year, they opened a venue on St-Antoine W. called Turbo Haus.

The band released half a dozen records, and toured Europe and North America. At the moment, their future is uncertain.