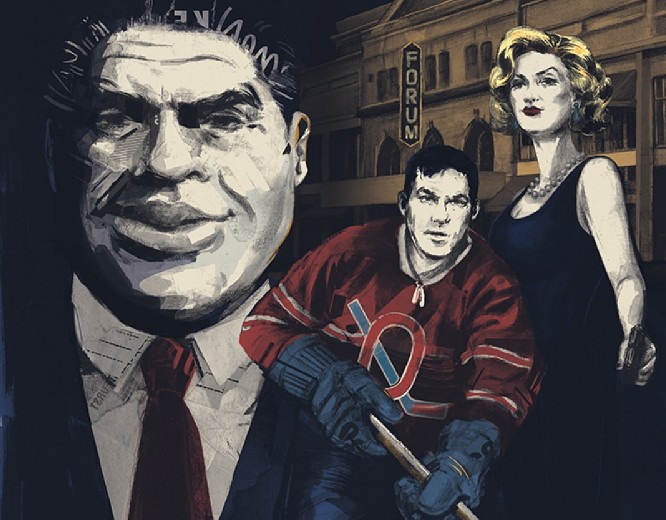 Set in the 1950s, Hockey Noir, the Opera takes place during the playoff finals between fictitious and long-standing rivals the Montreal Quabs and the Toronto Pine Needles. The show is performed by four singers, a conductor and six Ensemble contemporain de Montréal (ECM+) musicians who all interact with graphic novel-inspired projections.

Like any good noir storyline, this one is told by a detective as he reveals the gritty details of his investigation into scheming mobsters, drag queens, femme fatales and hockey stars. The story was written by former Montrealer Cecil Castelucci, who is the author of several award-winning books and graphic novels for young adults, including the ongoing DC Comics series Shade, the Changing Girl.

Clearly, this is not her first graphic novel opera.

Natalia Yanchak: Which came first: the union of hockey and noir or hockey and opera?

Cecil Castellucci: I think they both came at the same time. But I think it was noir. After our comic book opera Les Aventures de Madame Merveille, I was trying to find another genre that lent itself well to using images. Andre Ristic, my collaborator, and I were talking about noir and we are both big Hockey fans He told me the story of Bashin’ Bill Barilko, a Leaf who disappeared after scoring the winning goal in finals and was found dead 11 years later. So I think we were kicking around a lot of ideas and then we kind of hit upon hockey. Hockey is so musical, it was a natural fit.

NY: How much does one need to know about (or like) hockey to enjoy this show?

CC: You don’t have to know too much about hockey except that there is a final and that, for the team and for the fans, everything is on the line. That’s the great thing about sports and opera: they both have inherent drama. In most opera stories, it’s the moment where everything is coming together and falling apart. And that is kind of what happens in a game.

CC: The opera is bilingual! In Toronto, since they are so fluent in hockey, they will get the story. Also, our opera, and pretty much all operas, have supertitles. So we have those even for here, in French. But in Toronto we’ll have the text in English. Also, there is a voiceover that here will be in French and in Toronto will be in English. Also, many operas have a little summary of what the story is in the front, because even the most famous operas are kind of hard to follow sometimes.

For Belgium, we have a little hockey primer for the audience so that they can get the gist of that. I also think that our having illustrations, like a living graphic novel being projected, helps a lot towards understanding all the nuances, even if you didn’t speak either French or English. But like I said, at the end of the day, drama, love, betrayal and wanting to win is pretty universal!

NY: What was your greatest challenge when writing the libretto? Is this your first?

CC: It’s actually my second libretto and collaboration with Andre Ristic. We were paired together by Veronique Lacroix from ECM+ here in Montreal and we get along like gangbusters. For me, I kind of approach it like writing a comic book. You overwrite your words to get the story scaffolding down and then the artist, in this case the composer, throws out the sounds that he doesn’t need. There’s an extra layer here in that I write most of the story in English and then Andre and I go through a translation process. We knew that in this opera we wanted one of the characters to talk jouale, which I am not so fluent in, so Andre took care of that. For me it’s a true collaboration. I’m sure that other librettists work very differently with their composers. But to me, it’s like being in a punk band again.

NY: What has come out of working on this production that has surprised you most?

CC: As the writer, I’m kind of the Big Bang. I start the whole thing and then step back. To me, what is so amazing is how it all comes together. How Andre takes this story and distills it to its core human emotion and makes it into a haunting aria or duet or swelling music. I am also blown away by illustrator Kimberlyn Porter’s art. They evoke the feeling of noir so perfectly. Then there’s all the work that Veronique LaCroix and the singers do. I’ve been watching rehearsals all week like a fly on the wall and to watch it go from raw rehearsal to all the elements coming together is pretty much magic. ■