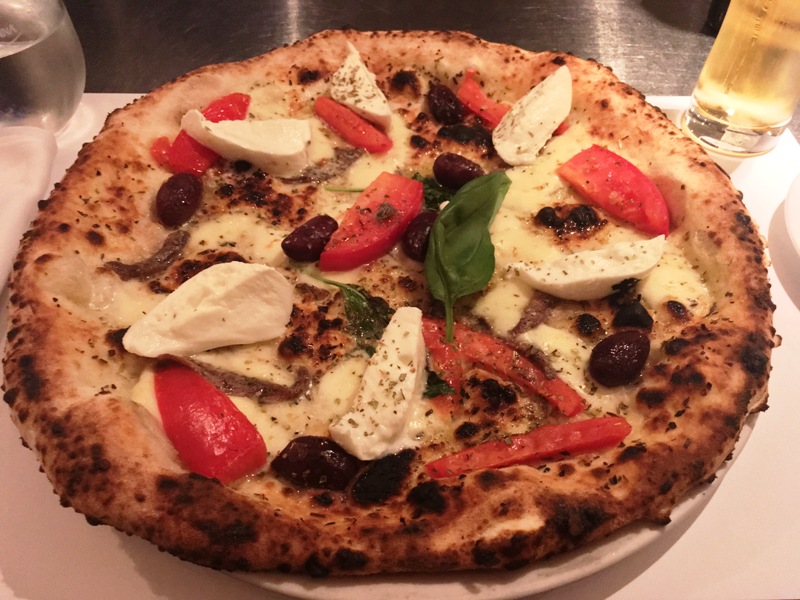 Montreal may not be known for its pizza — it’s tough to shed the image of being a bad-pizza city given the continued proliferation of sub-par 99-cent-slice joints — but if you know where to look, quality ‘za abounds. Resto Montreal decided to salute Montreal pizzerias by launching la Pizza Week, on now — it began on Tuesday, Oct. 24 and runs through next Tuesday, Oct. 31.

As with Poutine Week and Burger Week, Pizza Week involves over two dozen local restaurants offering special pies for the occasion, and an app that allows customers to rate them so a winner can be crowned when the event wraps up.

Cult MTL‘s food team sampled five of the most promising pies on the list. Here are our reviews:

Replete with a bustling and wine-guzzling, feel-good atmosphere and a constantly blazing wood-burning oven imported from Italy, Bottega is an exceedingly popular destination for Napoletana pizza well after opening its doors just over a decade ago. Pizza’s one of the main focuses here: Equipped with a crispy-on-the-outside-fluffy-on-the-inside outer crust rim and a concave interior, it’s the type you lift and fold to get a mouthful. Otherwise, it’ll just flop about in your hand.

While la Pizza Week’s got a category for the best margherita, their special white (no sauce) pizza for the occasion’s a good bet. The pie is topped with a coating of fior de latte mozzarella, Kalamata olives, anchovies, sweet San Marzano tomatoes with little acidity and a spattering of oregano. Once out of the oven, it’s finished off with slices of mozzarella di bufala and a basil leaf.

The only concern digging into this dish is which toppings are on your slice. Some may find the small salt fish, combined with the red wine vinegar-marinated olives to be a bit much in terms of pungency, but provided there’s a chunk of bufala in a bite to mellow it out, it all rolls together nicely. Coupled with its price point and location, it’s a fine dining option that’s worth a trip on the Pizza Week roster — provided there’s a free table. (JP Karwacki) 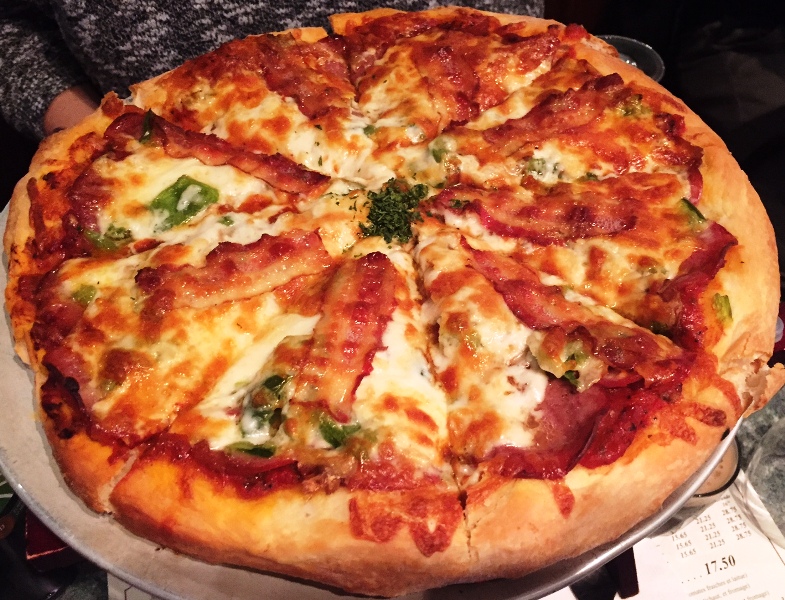 I have good news and bad news about Amelia’s Pizza Week entry. As it is traditional to start with the bad news, here it goes: the venerable McGill Ghetto pizzeria did not actually come up with a brand new recipe for the event. Instead, they knocked a couple of bucks off of some all-time classics. The good news? There is no pizza I love more in the world than the pizza from Amelia’s.

Opinions on the perfect pizza differ and all are more or less valid, but there is no pizza more appreciated by yours truly than Amelia’s. (It was a rough couple of months when they closed down after the death of the original owner, only to revive with a new name only one vowel away). The crust is thick but not too thick; the sauce is tart without tasting like it comes from a can. The toppings are hella traditional, but when you ask for bacon, they add slices of bacon rather than the chopped-up dog food that comes standard at by-the-slice places. An Amelia’s pizza is always served at roughly the temperature of the sun, so you have to let it sit and regain its earthly form before digging in, lest you sacrifice some precious roof-of-the-mouth skin.

The two entries that Amelia’s has offered for Pizza Week are the five cheese (which, as the name suggests, is topped with five cheeses and nothing else — not even sauce) and the all-dressed with bacon (which, as the name suggests, is just the standard all-dressed with extra bacon). I had the all-dressed with bacon because I like my pizza with tomato sauce, but the five cheese is great, too. They’re staples. I’ve had both. You would have gotten them even if it wasn’t Pizza Week, and they would have been just as good then. They’re even better a little cheaper. Everyone wins. (Alex Rose) 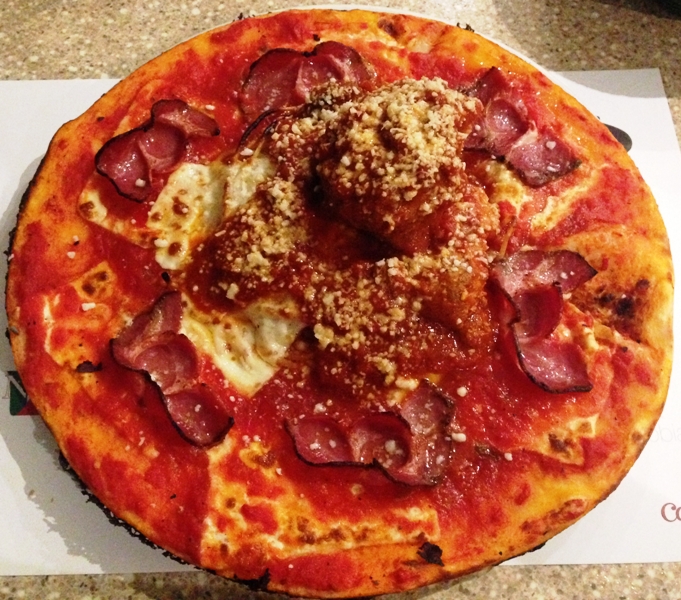 Living steps away from Little Italy has me passing by plenty of pizzerias. Pizzeria Napoletana is considered an institution of the neighbourhood and I was curious to know what they would do for Pizza Week. Turns out it’s a spin on their traditional Neapolitan style pizza called the Pizza Etna, a mozzarella and tomato sauce pizza topped with prosciuttino, Parmesan and this twist: a small portion of spaghetti baked in with an Italian style meat ball on top.

I was baffled by the idea of merging pasta and pizza into one (uh, pizzaghetti?) however it was better than I anticipated — my dining companion, who made the mistake of ordering a pizza other than the Etna, was more intrigued and interested by my pizza than their own. The crust was crispy and well cooked, there was a good balance of cheese and sauce, and then came the spaghetti and meatball, front and centre. Each bite was a flavour adventure, with the pasta, ground beef and prosciuttino combining beautifully with the base ingredients. Overall, it was a very enjoyable pizza. (Cindy Lopez) 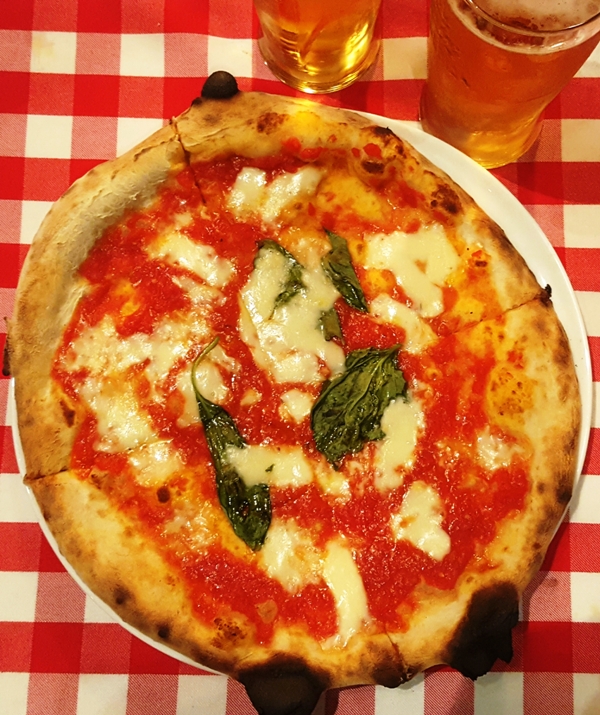 While not as famous for the pizza selection as Little Italy to the north, Mile End boasts its own crop of mighty fine pizzerias, including the Neapolitan-themed KESTÉ with Naples-born chef Gianluca Esposito. For their Pizza Week offerings, you can choose between the classic margherita and a calzone.

I often pass over the margherita in favour of a pie with more toppings, but sometimes the simplest option really is the best. With just three toppings of tomato sauce, mozza and basil, it’s possible to really savour each ingredient. KESTÉ’s pie is presented on a perfectly soft and chewy crust with a crisp exterior, with a nice helping of mozza and a big, fresh basil leaf on each slice, but the real star of this show is the tomato sauce, which is just so fresh and savoury and sweet and tart all together it was like eating tomatoes right off the vine.

Given KESTÉ’s combining super fresh ingredients, a crisp house beer and a roomy, casual environment with iconic red gingham table cloths, high ceilings with exposed piping and hockey on the screen, it won’t be long before I make another trip. (Lisa Sproull) 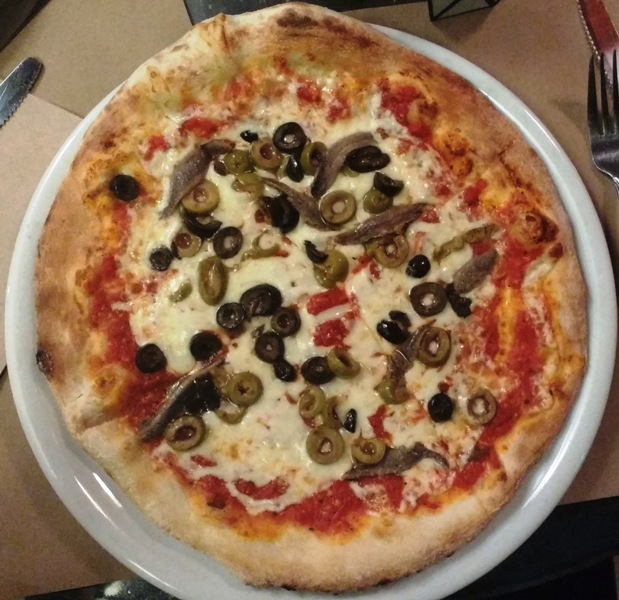 The heritage train station setting and wood-fired oven drew me to this unlikely location at the centre of TMR. Catering mainly to a local crowd, the unpretentious venue was crammed by the time we finished eating.

We started with an arugula salad, which was light, well-dressed and enough to share between two. Our pizzas came out quickly: the Napoletana, topped with green and black olives and anchovies could have been saltier due to the watery tanglessness of the black olives. The Fornarina, with cheese and mushrooms, was fresh and simple, and the Margherita hit all the right notes. Also of note: the chili oil was not spicy nor infused with any flavour.

Overall, Pizzaiolle makes a consistent pie. Their dough is soft (instead of chewy) and baked well with a homemade sauce and standard, grated mozzarella. This isn’t most remarkable wood-fired pizza I’ve had, but more like an elevated take-away from your local pizzeria. (Natalia Yanchak)